Artifacts of the Lost Global Civilization 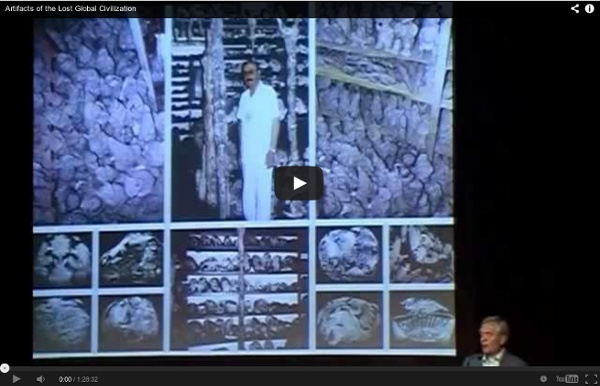 High winds expose previously unknown Nazca geoglyphs - Galactic ConnectionGalactic Connection Strong winds and sandstorms reaching speeds of up to 60 miles per hour, which occurred in the region of Ica last week, have revealed previously undiscovered Nazca lines in the Valley of El Ingenio in the Nazca plains of Peru, according to a news release in El Comercio. The geoglyphs include a zigzag line, camelids, a bird, and a snake measuring 60 metres in length. The newly-discovered lines correspond to the transition period from the Paracas to the Nazca culture, which occurred around 2,000 years ago. The figures were discovered by pilot Eduardo Herran and researcher Gómez de la Torre, during a flight inspection made ​​this week in the Nasca desert. The geoglyphs were found on two hillsides situated to the left and right of El Ingenio Valley, near San Jose and Pampas of Jumana, where the world famous Nazca lines are concentrated.

In 1969, construction workers found an alleged 200,000-year-old antediluvian structure in Oklahoma In 19690, construction workers in Oklahoma stumbled across a structure that according to many could rewrite history. The team of workers discovered the remains of a 200,000-year-old structure. Newspaper The Oklahoma covered the story in 1969. Could Oklahoma’s “Ancient Mosaic Floor”—contianing mystery post holes—rewrite the history of not only North America but the entire planet as well? According to a newspaper report published in 1969, the structure found by construction workers in Oklahoma dates back around 200,000 years. In nearly all corners of the world have researchers and archaeologists stumbled across things they can hardly explain.

» Was That A UFO That Attacked A Taliban Camp In Afghanistan This incredible video shows the moment a UFO attacks and destroys a Taliban base in Afghanistan. The one minute 35 second clip, uploaded to YouTube, begins with footage of a large, grey triangular-shaped ‘craft’ hovering in the sky above the eastern city of Asadabad. As the crew of a Nato armoured vehicle watch on in the foreground, flashing lights suddenly flash spit forth from the underside of the mysterious object. It quickly becomes apparent that the craft has opened fire on something or someone, for barely a second later, explosions can be seen and heard and a huge plume of smoke mushrooms into the firmament. For a while, the cloud of smoke is so large, the UFO is completely obscured. But then the camera operator zooms in, giving viewers a close up of the remarkable object.

Tiny Tonga Once Lorded Over 1,000-Mile Pacific Ocean Empire Tiny Tonga Once Lorded Over 1,000-Mile Pacific Ocean Empire The seafaring empire of Tonga in the South Pacific Ocean once spanned more than a thousand miles, serving as the hub through which distant settlements exchanged artifacts and ideas, researchers say. Tonga is an archipelago of about 160 Polynesian islands, with the core of the kingdom covering an area of about 195,000 square miles. The islands, located about two-thirds of the way from Hawaii to New Zealand, were first settled about 2,800 years ago by the Lapita people. Sign up for Science news delivered to your inbox Geoffrey Clark

A Prehistoric UFO Hundreds of tiny metallic parts discovered in the Urals -dated 100,000 years or more- are pointing at an ancient technological civilization. Archeologists make a great to-do about certain discoveries. Always about those ones that are acceptable for the dogma. Other sensational discoveries are quickly hushed up. Let’s take an interest in the Prehistoric Nanotechnologies Large Carnivores May Have Scavenged on Neanderthals, Study Finds The teeth were found at the same dig site that previously showed possible evidence of cannibalism. Video Player is loading. Current Time 0:00 Duration 4:05 Remaining Time -4:05 Madol or Nan Madol Mysteries By: David VeritasContributor Profile | More Stories Monday, May 6, 2013 11:27 (ALTHeadlines) Madol, or Nan Madol, is the name of a mysterious ancient city found off the island of Pohnpei, in Micronesia. The entire city was build upon raised stone platforms in the sea instead of on dry land on neighboring islands, for reasons unknown.

The 300,000-Year-Old Nanotechnology Artifacts of Russia An Oopart (out of place artifact) is a term applied to dozens of prehistoric objects found in various places around the world that, given their level of technology, are completely at odds with their determined age based on physical, chemical, and/or geological evidence. Ooparts often are frustrating to conventional scientists and a delight to adventurous investigators and individuals interested in alternative scientific theories. In 1991, the appearance of extremely tiny, coil-shaped artifacts found near the banks of Russia’s Kozhim, Narada, and Balbanyu rivers brought about a debate that has continued to this day. These mysterious and minuscule structures suggest that there may have been a culture capable of developing nanotechnology 300,000 years ago. These manufactured coils were initially discovered during geological research associated with the extraction of gold in the Ural mountains.

First modern Britons had 'dark to black' skin, Cheddar Man DNA analysis reveals The first modern Britons, who lived about 10,000 years ago, had “dark to black” skin, a groundbreaking DNA analysis of Britain’s oldest complete skeleton has revealed. The fossil, known as Cheddar Man, was unearthed more than a century ago in Gough’s Cave in Somerset. Intense speculation has built up around Cheddar Man’s origins and appearance because he lived shortly after the first settlers crossed from continental Europe to Britain at the end of the last ice age. People of white British ancestry alive today are descendants of this population.

Atlantis Found: Giant Sphinxes, Pyramids In Bermuda Triangle (update) By Terrence Aym Perhaps eclipsing the discoveries of Troy and King Tut’s tomb is the discovery of Atlantis. Now, two daring scientists, Paul Weinzweig and Pauline Zalitzki, claim they’ve found it. They discovered the submerged ruins of the ancient city off the shores of Cuba. This Face Changes the Human Story. But How? By Jamie Shreeve, National Geographic Learn how your family history is connected to the human journey with National Geographic’s Geno 2.0 DNA ancestry kit .

The Mystery of the San Pedro Mountains Mummy In June 1934, two gold prospectors, who had been digging and blasting for gold within the San Pedro Mountains in Wyoming, came across a small cavern buried deep within the thick rock. When the dust began to settle, the prospectors made a startling discovery – the well-preserved, but long-forgotten, remains of a tiny human. The origins of this little human were a mystery.

85,000-year-old Homo sapiens bone found in Saudi Arabia rewrites human history - Archaeology A single finger bone found in Saudi Arabia dated to 85,000 years has been definitively identified as human, and is changing the paradigm of human migration out of Africa. The unexpected discovery at Al Wusta – today a site in the heart of the Al-Nefud desert – shows that modern humans left Africa much earlier than had been thought, in multiple waves. Also, the location of the fossil far from the sea indicates that the model of humans hugging the coasts while leaving Africa is wrong, too, according to the report in Nature on Monday. If anything, the bone in and of itself understates the potential revelation regarding our prehistory.

Initial DNA analysis of Paracas elongated skull released – with incredible results Paracas is a desert peninsula located within the Pisco Province in the Inca Region, on the south coast of Peru. It is here were Peruvian archaeologist, Julio Tello, made an amazing discovery in 1928 – a massive and elaborate graveyard containing tombs filled with the remains of individuals with the largest elongated skulls found anywhere in the world. These have come to be known as the ‘Paracas skulls’. In total, Tello found more than 300 of these elongated skulls, which are believed to date back around 3,000 years. A DNA analysis has now been conducted on one of the skulls and expert Brien Foerster has released preliminary information regarding these enigmatic skulls. It is well-known that most cases of skull elongation are the result of cranial deformation, head flattening, or head binding, in which the skull is intentionally deformed by applying force over a long period of time.