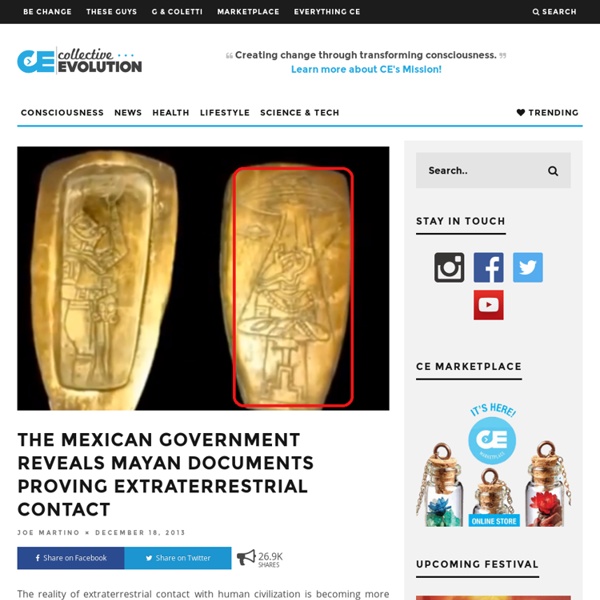 The reality of extraterrestrial contact with human civilization is becoming more clear by the month as streams of information about the extraterrestrial presence and past influence hits. While some of us still have our doubts about ET contact, many are starting to realize the truth that has been talked about for centuries. One big story involves the Mexican government who has released documents and images of objects found on the site of Calakmul, Mexico which help prove the reality of ET contact. Thanks for this release can be given to the National Institute of Anthropology and History (INAH) who found these fascinating disks in Mexico. “Mexico will release codices, artefacts and significant documents with evidence of Mayan and extraterrestrial contact, and all of their information will be corroborated by archaeologists,” he said. The Mexican government is releasing these state-held secrets that have been protected for about 80 years. Above is an image of the disks in question. Sources: Related:  Ancient & Prehistoric Artefacts • Artifacts

Secret Mayan Artifacts, a hoax? There has been a lot of talk since the release to the public of these alleged Mayan artifacts. We are talking about a large number of items that were held secret by the Mexican Government were supposedly released to the public a few years ago. The release of the items made headlines quickly around the world with archaeologists, researchers and conspirators debating whether they are a hoax or the real deal. According to what we have managed to research these items were actually discovered in Calakmul, Mexico. The release of these artifacts was hand-to-hand prepared with a production company that was filming a documentary about the Mayan civilization and extraterrestrial beings, taking in count that the end of the Mayan calendar was the ideal time to release a disclosure movie, based on “archaeological” evidence. The first article I read when I started looking for information about these strange articles was this one from the Guardian. Now about the incredible Mayan civilization.

The 10,000 year-old Sumerian space maps, dictated by ET Homo Sapiens from Planet Nibiru Excerpt from “Anunnaki: legacy of the Gods, techno-savvy ET s from the Planet Nibiru who came for gold, created us from their genome to work the mines, posed as Gods, decided to let us drown, but then decided to breed us to work for them.” Sumerians’ rocket route maps and clay tablets show planets past eye-range. The Sumerians wrote that giant people, whom the Sumerians called “Anunnaki” or Those-Descended-from-the-Sky, said they came from the planet Nibiru 450,000 years ago. Clay tablet in the ruins of the Royal Library at Nineva shows how to go through inner solar system. In Andy Lloyd’s scenario, their planet, Nibiru, revolves around Nemesis, Solaris’ binary dark dwarfstar; this, from the perspective of Earth, is as far from Earth as Nibiru goes. Sumerians lacked telescopes and couldn't see Uranus’ and Neptune’s orbits the route maps show. One of the geometrical drawings are the Nazca lines. Image left: Nazca-geometrical-drawing.

EWAO Millennia-old blueprints for building Interstellar Spaceships discovered by Chinese researchers According to several reports, Chinese researchers came across what appear to be alleged blueprints for an Interstellar Spaceship. But what did Chinese researchers actually stumble across? Millions of people today firmly believe highly sophisticated alien civilizations have visited us for thousands of years. While many believe the evidence of their presence can be found in many ancient cultures, skeptics firmly rejected the idea and state such history never took place, saying the actual evidence is needed to support ‘wild’ claims. However, what if there is actual evidence but mainstream scholars and governments around the world are trying to keep that information a secret? Not long ago, a group of Chinese researchers came across what appear to be ‘blueprints’ for building interstellar spaceships, using ‘antigravitational propulsion methods’. The alleged manuscript written in the fourth Century BC was discovered in Lhasa Tabet by Chinese Researchers. According to reports, Dr. Ivan

Dropa Stone Discs The Dropa Stone Discs As humanity searches for its extraterrestrial roots, amount the enigmatic objects found along the way are the Drop Stones of Tibet. Who were the Dropa? The Dropa (also known as Dropas, Drok-pa or Dzopa) are, according to certain controversial writers, a race of dwarf-like extraterrestrials who landed near the Chinese-Tibetan border some twelve thousand years ago. Skeptics note, however, a number of problems with the case (and a lack of corroborative evidence), which offers significant doubt as to the reality of the more sensationalistic Dropa claims. Alleged Discovery -- Chi Pu Tei, a professor of archaeology at Beijing University, and his students were on an expedition to explore a series of caves in the pathless Himalayan mountains of the remote Bayan-Kara-Ula in Qinghai on the border of China and Tibet. They found many neat rows of tombs with short 4 ft 4 in inch skeletons buried within. Photos of the Dropa Stones Dr. Further research Russian Research Corroboration

EWAO The Great Pyramid of Giza... A Tesla-Like Powerplant Created Thousands of Years Ago The Great Pyramid of Giza is one of the best examples of ancient energy machines. It was a Tesla-like power plant created thousands of years ago. It was a huge ancient structure that was capable of using the Earth’s natural properties in order to create or produce a great amount of energy. If we approach the history of ancient civilizations from another perspective, we will encounter that ancient civilizations around the globe were, in fact, extremely sophisticated and used advanced technologies thousands of years before mainstream science ‘reinvented them’. The idea that civilizations around the world have evolved from a primitive state, towards a more advanced one is something that mainstream scholars have tried to implement and place as the ultimate truth inside our society, schools and history books. These advanced technologies were present in ancient Egypt, Ancient Sumer, and in North, Central and South America. Ivan Latest posts by Ivan (see all)

A Giant Energy Machine? 5 Incredible characteristics of the Bosnian Pyramid Ivan Ivan has been part of the team at Universe Explorers since February 2015.He is a freelance writer, editor-in-chief of ancient-code.com He also writes for Svemir Online and Ancient Origins.History, Archaeology, Space and world’s mysteries are some of the topics he writes about.You can follow Ivan on Facebook" Latest posts by Ivan (see all) From the presence of a mysterious underground energy beam with a radius of s 4.5 meters and a frequency of 28 kHz with a strength of 3,9 V, to the presence of ultrasound Beams at the Pyramids of the Sun, here we have 5 incredible characteristics of the Bosnian Pyramid which suggests this could, in fact, be an extremely advanced ancient structure. The idea that the Bosnian Pyramid is, in fact, one of the oldest Pyramids on the surface of the planet, and that it belongs to a set of other ancient structures in the area is heavily disputed by numerous scientists who refuse to accept the notion that there are highly advanced structure located in Europe.