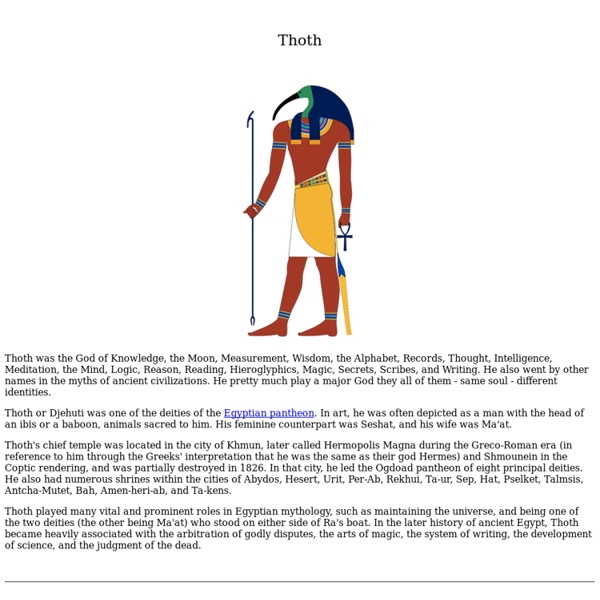 Thoth Thoth was the God of Knowledge, the Moon, Measurement, Wisdom, the Alphabet, Records, Thought, Intelligence, Meditation, the Mind, Logic, Reason, Reading, Hieroglyphics, Magic, Secrets, Scribes, and Writing. He also went by other names in the myths of ancient civilizations. He pretty much play a major God they all of them - same soul - different identities. Thoth or Djehuti was one of the deities of the Egyptian pantheon. Thoth's chief temple was located in the city of Khmun, later called Hermopolis Magna during the Greco-Roman era (in reference to him through the Greeks' interpretation that he was the same as their god Hermes) and Shmounein in the Coptic rendering, and was partially destroyed in 1826. Thoth played many vital and prominent roles in Egyptian mythology, such as maintaining the universe, and being one of the two deities (the other being Ma'at) who stood on either side of Ra's boat. Thoth the Architect In one role or another Thoth played a crucial part in the Depictions

Tree of life (Kabbalah) The Tree of Life, or Etz haChayim (עץ החיים) in Hebrew, is a classic descriptive term for the central mystical symbol used in the Kabbalah of esoteric Judaism, also known as the 10 Sephirot. Its diagrammatic representation, arranged in 3 columns/pillars, derives from Christian and esoteric sources and is not known to the earlier Jewish tradition.[citation needed] The tree, visually or conceptually, represents as a series of divine emanations God's creation itself ex nihilo, the nature of revealed divinity, the human soul, and the spiritual path of ascent by man. In this way, Kabbalists developed the symbol into a full model of reality, using the tree to depict a map of Creation. The symbolic configuration of 10 spiritual principles (11 can be shown, of which - Keter and Da'at are interchangeable), From the Renaissance onwards, the Jewish mystical concept was adopted by some esoterically inclined Christians as well as some Hermeticists. In Zoroastrianism: In Buddhism:

CHRONUS & AEON : Greek protogenos god of time ; mythology ; pictures : KHRONOS & AION KHRONOS (or Chronus) was the Protogenos (primeval god) of time, a divinity who emerged self-formed at the beginning of creation in the Orphic cosmogonies. Khronos was imagined as an incorporeal god, serpentine in form, with three heads--that of a man, a bull, and a lion. He and his consort, serpentine Ananke (Inevitability), circled the primal world-egg in their coils and split it apart to form the ordered universe of earth, sea and sky. Khronos and Ananke continued to circle the cosmos after creation-their passage driving the circling of heaven and the eternal passage of time. The figure of Khronos was essentially a cosmological doubling of the Titan Kronos (also "Father Time"). Khronos was represented in Greco-Roman mosaic as Aion, "eternity" personified. Alcman, Fragment 5 (from Scholia) (trans. Orphica, Theogonies Fragment 54 (from Damascius) (trans. Orphica, Argonautica 12 ff (trans. Orphic Hymn 12 to Heracles (trans. Pindar, Olympian 2. 17 ff (trans. Pindar, Paean 2 (trans.

The Book Of Thoth In Egyptian mythology, Thoth is the god of wisdom, time, writing, magic and the moon. The Book of Thoth is a legendary book containing powerful spells and knowledge, said to have been buried with the Prince Neferkaptah (meaning perfect ka of Ptah in Egyptian) in the City of the Dead. The reader of the rolls would know the language of the animals, be able to cast great spells, and be able to enchant the sky and earth themselves. In recent years books such as 'The Orion Mystery' by Robert Bauval have created a popular belief that The Sphinx and other Giza monuments are thousands of years older than is currently claimed by orthodox Egyptologists. Another legend Rameses the Great, Pharaoh of Egypt, had a son called Setna who was learned in all the ancient writings, and a magician of note. When Setna read further that the Book of Thoth had been buried with Nefrekeptah in his royal tomb at Memphis, nothing would content him until he had found it and learned all his wisdom. 'Be it as you wish!'

DMT: The Spirit Molecule The Green Man, Spirit of the Forest For our ancient ancestors, many spirits and deities were associated with nature, wildlife, and plant growth. After all, if you had just spent the winter starving and freezing, when spring arrived it was certainly time to give thanks to whatever spirits watched over your tribe. The spring season, particularly around Beltane, is typically tied to a number of pre-Christian nature spirits. Many of these are similar in origin and characteristics, but tend to vary based on region and language. Strongly connected to Jack in the Green and the May King, as well as John Barleycorn during the fall harvest, the figure known as the Green Man is a god of vegetation and plant life. However, it was also a place you had to enter, whether you wanted to or not, because it provided meat for hunting, plants for eating, and wood for burning and building. The Green Man is typically portrayed as a human face surrounded by dense foliage. Legends connected to the archetype of the Green Man are everywhere.

Crystalinks Home Page Can DMT Connect the Human Brain to a Parallel Universe? If you'd asked this question a few decades ago you'd have been met with raucous laughter – nowadays, however, the idea of parallel universes is taken seriously by scientists at the cutting edge, while our understanding of consciousness is slowly but surely outgrowing the materialistic understanding developed in Victorian times. Learning Mind takes a look at the pioneering work of Rick Strassman. Rick Strassman in his book «DMT: the Spirit Molecule», claims that DMT, which is one of the most powerful psychedelic drugs, can provide a reliable and regular access to the other planes of existence. Strassman refers to the British scientist David Deutsch, a leading theorist in this area and author of «The fabric of reality».

Herne, God of the Wild Hunt The Man Behind the Myth: Although Herne is seen as an aspect of Cernunnos, the Horned God, in the Berkshire region of England there is actually a story behind the legend. According to folklore, Herne was a huntsman employed by King Richard II. In one version of the story, other men became jealous of his status and accused him of poaching on the King's land. In another variation of the legend, Herne was fatally wounded while saving King Richard from a charging stag. Shakespeare Gives a Nod: In The Merry Wives of Windsor, the Bard himself pays tribute to the ghost of Herne, wandering Windsor Forest: There is an old tale goes that Herne the Hunter, Some time a keeper here in Windsor Forest, Doth all the winter-time, at still midnight, Walk round about an oak, with great ragg'd horns; And there he blasts the tree, and takes the cattle, And makes milch-kine yield blood, and shakes a chain In a most hideous and dreadful manner. Herne as an Aspect of Cernunnos: Lord of the Forest:

Paranormal Phenomena There Is No Mistaking The Evidence; Cannabis Cures Cancer May 12, 2013 2012thebigpicture It's no coincidence that the government has tried to criminalize the use of marijuana and growing the hemp plant. They know it's a miracle vegetable and that it's helping people to either deal with health issues or cure ---YES, I SAID CURE---diseases the allopathic medical community has chosen to exacerbate through the use of costly, toxic drugs and cocktails that create more health issues than they resolve. While smoking the dried leaves of the cannabis is not recommended, the phenomenal benefits of ingesting the raw plant or the oils derived from it are well documented. Our dog went through an emergency integrative cancer treatment protocol which served its purpose, but now he's on a homemade diet mixed with a little healthy kibble, organic green powders, probiotics, oregano oil and hemp oil. I've posted about this before, and I'm doing it again. Cannabis is one of the most powerful healing plants in the world and it makes cancer essentially disappear.

LOKI : The deity from Norse Mythology One of the world’s major Trickster Gods, in his early days LOKI was a rascal; crafty, sneaky, silly and malicious — a Loki The Lad. The son of two giants, LAUFEY and FARBAUTI, he was so outrageously mischievous that he even sneaked his way into becoming a God. He was the first anti-hero, quick-witting his way out of the tight corners and confrontations caused by his misdeeds. His first escapade was a very rampant romp. LOKI came up with the plan of contracting a Giant to do the job. Alas, the Giant was not on his own. Now LOKI, like fire and smoke, was a shape-changer from the word go. With his horse missing, the Giant didn’t quite make the schedule. Meanwhile LOKI was having a fine old time frolicking in the fields. LOKI was now well in with top God ODIN and his son THOR, with whom he shared numerous adventures. LOKI had many run-ins with the dwarves, which he cheated at any opportunity until they stitched him up. He also managed to sneak himself another wife — or did he?