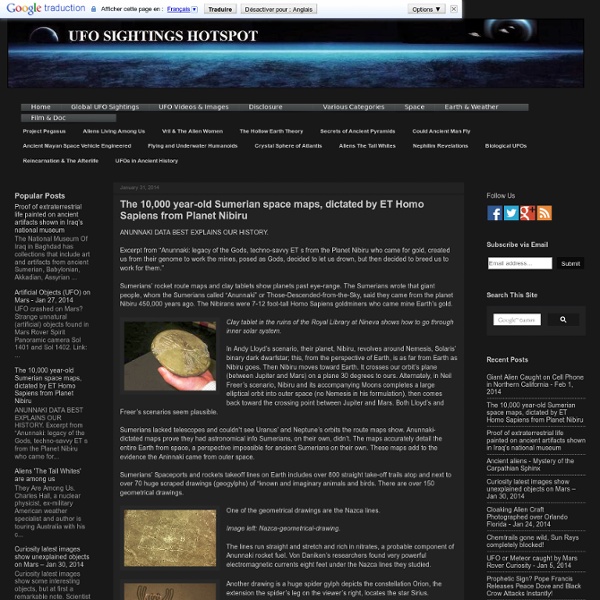 Excerpt from “Anunnaki: legacy of the Gods, techno-savvy ET s from the Planet Nibiru who came for gold, created us from their genome to work the mines, posed as Gods, decided to let us drown, but then decided to breed us to work for them.” Sumerians’ rocket route maps and clay tablets show planets past eye-range. The Sumerians wrote that giant people, whom the Sumerians called “Anunnaki” or Those-Descended-from-the-Sky, said they came from the planet Nibiru 450,000 years ago. The Nibirans were 7-12 foot-tall Homo Sapiens goldminers who came mine Earth’s gold. Clay tablet in the ruins of the Royal Library at Nineva shows how to go through inner solar system. In Andy Lloyd’s scenario, their planet, Nibiru, revolves around Nemesis, Solaris’ binary dark dwarfstar; this, from the perspective of Earth, is as far from Earth as Nibiru goes. Sumerians lacked telescopes and couldn't see Uranus’ and Neptune’s orbits the route maps show. One of the geometrical drawings are the Nazca lines. Related:  Artifacts

The Mexican Government Reveals Mayan Documents Proving Extraterrestrial Contact The reality of extraterrestrial contact with human civilization is becoming more clear by the month as streams of information about the extraterrestrial presence and past influence hits. While some of us still have our doubts about ET contact, many are starting to realize the truth that has been talked about for centuries. One big story involves the Mexican government who has released documents and images of objects found on the site of Calakmul, Mexico which help prove the reality of ET contact. Thanks for this release can be given to the National Institute of Anthropology and History (INAH) who found these fascinating disks in Mexico. This new discovery strikes a hefty blow to the secrecy that has been purposely created surrounding the true history of our earth. The disks are of Mayan creation and were found about 80 years ago according to the INAH. The Mexican government is releasing these state-held secrets that have been protected for about 80 years. Sources:

Dropa Stone Discs The Dropa Stone Discs As humanity searches for its extraterrestrial roots, amount the enigmatic objects found along the way are the Drop Stones of Tibet. Who were the Dropa? Alleged Discovery -- Chi Pu Tei, a professor of archaeology at Beijing University, and his students were on an expedition to explore a series of caves in the pathless Himalayan mountains of the remote Bayan-Kara-Ula in Qinghai on the border of China and Tibet. They found many neat rows of tombs with short 4 ft 4 in inch skeletons buried within. There were no epitaphs at the graves, but instead hundreds of one foot wide stone discs ("Dropa Stones") were found having 3/4 inch wide holes in their centers. Photos of the Dropa Stones Each stone disk was reportedly inscribed with two fine grooves spiraling from the edge to a hole in the disk's center, perhaps not unlike the Phaistos Disk. According to Tsum Um Nui, one of the lines of the hieroglyphs reads, "The Dropas came down from the clouds in their aircraft. Dr. 1. 2.

Emerald Tablet An imaginative 17th century depiction of the Emerald Tablet from the work of Heinrich Khunrath, 1606. The Emerald Tablet, also known as the Smaragdine Table, or Tabula Smaragdina, is a compact and cryptic piece of Hermetica reputed to contain the secret of the prima materia and its transmutation. It was highly regarded by European alchemists as the foundation of their art and its Hermetic tradition. The original source of the Emerald Tablet is unknown. Textual history[edit] The text of the Smaragdine Tablet gives its author as Hermes Trismegistus ("Hermes the Thrice-Greatest"), a legendary Hellenistic[1] combination of the Greek god Hermes and the Egyptian god Thoth.[2] Despite the claims of antiquity, it's believed to be an Arabic work written between the sixth and eighth centuries.[3] The oldest documentable source of the text is the Kitāb sirr al-ḫalīqa (Book of the Secret of Creation and the Art of Nature), itself a composite of earlier works. The tablet text[edit] Latin text[edit]

Vaporizers For Sale The 14 Tablets of Enki (Former Anunnaki Leader of Planet Earth) by John R. Deahl, via In5D You may want to bookmark this page for future reference. Included is a ... by John R. You may want to bookmark this page for future reference. Those who don’t learn from history are doomed to repeat it. Scroll down for the summary of each chapter. The tablets are the account of Enki, an Annunaki, from a planet called Nibiru. Enki claims in these tablets to have come to Earth to mine gold for their home planet Nibiru. Genesis 1:26 And God said, Let us make man in our image, after our likeness: and let them have dominion over the fish of the sea…. The first Adams and Eves were a “blacked headed people” and were sterile. The Anunnaki appear to believe in evolution of their own species although there is reference to a “creator of all”. Despite this belief in a supreme being, their apparent belief in evolution could explain why, despite their advance technology and knowledge, they seem to be surprisingly unstable civilization emotionally and morally.

Literatura Two Stone Age 9,500-Year-Old Artifacts Unearthed MessageToEagle.com - Archaeologists have unearthed two Stone Age figurines – c. 9,500 year old – in Tel Motza located between Jerusalem and Tel Aviv. The ancient figurines, found in excavations prior to widening Highway 1 in the area, depict a ram and a wild pig or buffalo. The ram, made from limestone, has intricately carved horns and is about 15 centimeters. The second figurine is more abstract and depicts a large animal with prominent horns that could be a bovine or buffalo. A rare early neolithic ram figurine. Image credit: Yael Yolovitch, courtesy of the Israel Antiquities Authority Anna Eirikh, the other co-director of the dig, believes that the figurines are linked to the process of animal domestication, as the inhabitants began to build complex societies and agricultural villages. Wild bovine. However, according to another theory, the figurines were used as talismans. Original source: - here MessageToEagle.com

Robert Scoble - Facebook Tips The Concept of the Djed Pillar Copyright © 2002 by Vincent Brown Legend of Osiris | Body of Osiris | Four Pillars of Heaven | Four Sons of Horus | Ba-Neb-Djed One of the most enigmatic symbols of Ancient Egypt is the Tet, or Djed. Although it was widely used as a religious icon throughout much of the history and geography of Ancient Egypt, it is still not clearly understood what the Djed was originally conceived to represent.Determining its meaning from its appearance alone is not an easy task so we shall take some of the suggested definitions and analyse each individually. But first of all lets look at the key elements that make up the symbol. Typical Distinctive Features: Four horizontal bars surmounting a vertical shaft Vertical striations between each bar These striations are shown in profile on the sides of the Djed creating a curved appearance Four bands around neck of the shaft Sometimes a small capital can be seen surmounting the Djed The Djed often stands on a rectangular base A Tree: The Backbone of Osiris: ..."

The Rise of Portable Technology Posted by Josh.B. on September 27, 2016 Convenience is one of the highest tenants of human ingenuity, and it has led to the creation of some of the most innovative breakthroughs in technology. All technology is meant to make some aspect of human life easier, and there have been leaps and bounds in modern tech over the last few decades. However, that is the way technology progresses. Personal technology has come a long way, primarily since general scientific advancements make all components smaller for electronic devices across the board. One of the culminations of portable vaporizer technology is the Pax 2 by Ploom.