What is causing the waves in California to glow? 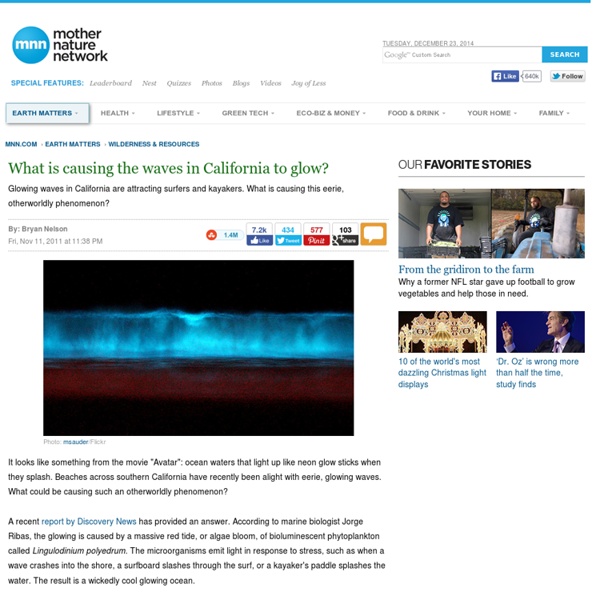 It looks like something from the movie "Avatar": ocean waters that light up like neon glow sticks when they splash. Beaches across southern California have recently been alight with eerie, glowing waves. What could be causing such an otherworldly phenomenon? A recent report by Discovery News has provided an answer. According to marine biologist Jorge Ribas, the glowing is caused by a massive red tide, or algae bloom, of bioluminescent phytoplankton called Lingulodinium polyedrum. The microorganisms emit light in response to stress, such as when a wave crashes into the shore, a surfboard slashes through the surf, or a kayaker's paddle splashes the water. The phenomenon has been observed on a semi-regular basis since at least 1901 along the beaches around San Diego, Calif. For surfers who don't mind catching a wave in water teeming with a sludge of microorganisms, the glowing ocean offers the chance of a lifetime.

They've got eyes in the back of their head: Researchers create mutant tadpoles with body parts on their tails Scientists grew new organs by changing bioelectric signals in cellsFurther research planned targeting brain, spinal cord and limbs of tadpole embyos By Nadia Gilani Updated: 21:32 GMT, 8 December 2011 Frankenstein-style creatures, including tadpoles with eyes on their backs and tails, have been created by scientists, it was revealed today. US researchers have been able to grow new organs in parts of the body where they don't normally grow by changing bioelectric signals in cells.

Memory Improvement Techniques - Improve Your Memory with MindTools.com - StumbleUpon © VeerPRZEMYSLAW PRZYBYLSKI Use these techniques to improve your memory. The tools in this section help you to improve your memory. They help you both to remember facts accurately and to remember the structure of information. The tools are split into two sections. Human World Human World The women of the Tiwi tribe in the South Pacific are married at birth. When Albert Einstein died, his final words died with him. The nurse at his side didn't understand German. There actually AREN'T that many fish in the sea: Rivers and lakes contain 80% of Earth's species - despite covering 2% of surface By Rob Waugh Updated: 16:51 GMT, 8 February 2012 A team led by Dr John Wiens, from Stony Brook University in New York, studied the biodiversity of ray-finned fish (such as cod, pictured) which make up 96% of all fish species Contrary to popular belief, there's not a lot of fish in the sea, say researchers. There are far more species in rivers and lakes, say researchers - and the discovery could hint at previous mass extinctions long ago.

New Galaxy Map Relocates The Milky Way To A Ginormous Supercluster Called Laniakea Astronomers have long had a sense of where the Milky Way is in relation to other galaxies, but a new three-dimensional star map gives us a more nuanced look at our cosmic neighborhood. Until now, the Milky Way was believed to be one galaxy in the 2,000 that make up what's known as the Virgo "supercluster." But as the new map shows, the Milky Way's 100 billion stars are actually part of something 100 times bigger: a supercluster of galaxies astronomers have christened Laniakea, meaning "immense heavens" in the Hawaiian language. Laniakea spans some 520 million light-years across. As you might imagine, all those stars contain a lot of mass.

What You Cant Say - StumbleUpon January 2004 Have you ever seen an old photo of yourself and been embarrassed at the way you looked? Did we actually dress like that? We did. Thing in a Jar Thing in a Jar 7 inches by 4 inches, mason jar Pictured above is the Thing in a Jar that's usually sitting in my office at work. Bees Solve Hard Computing Problems Faster Than Supercomputers We already know bees are pretty good at facial recognition, and researchers have shown they can also be effective air-quality monitors. Here's one more reason to keep them around: They're smarter than computers. Bumblebees can solve the classic "traveling salesman" problem, which keeps supercomputers busy for days.