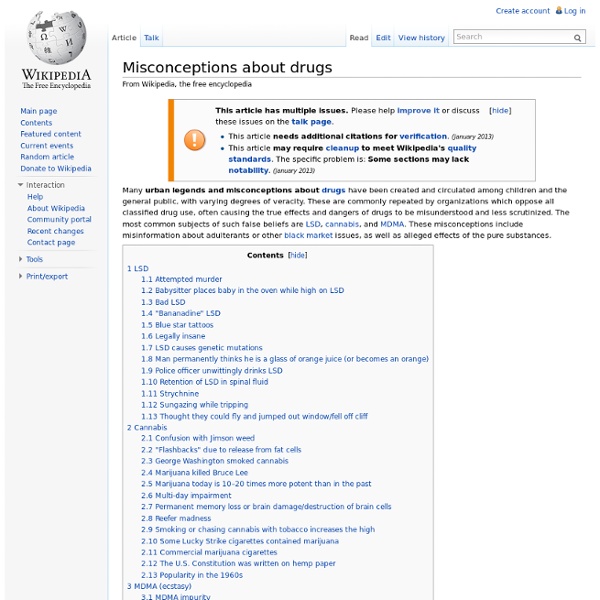 LSD[edit] Some of the strangest urban legends told are those about lysergic acid diethylamide (LSD), a potent psychedelic drug that gained popularity in several countries in the 1960s and 1970s, and experienced a brief resurgence in the mid to late 1990s before declining from 2000 onward. The drug's relation to the 1960s counterculture was likely part of the reason for such legends. Attempted murder[edit] "Anyone caught selling LSD can be charged with attempted murder." This is a common urban legend that the psychotropic effect of LSD is such an extreme danger to human life that the seller could face charges of attempted murder or manslaughter. Babysitter places baby in the oven while high on LSD[edit] This is an unverifiable drug-scare story dating to the 60s of a hippie babysitter girl putting a baby in the oven and a turkey in the bassinet. Bad LSD[edit] A "bad trip" is easily caused by an expectation or fear of ill effects, which may later be blamed on "bad acid." "Bananadine" LSD[edit]

Esto es lo que tu cerebro con drogas realmente se parece This actually raises several questions... 1. Where did they get the drugs to begin with? And how do you go about getting "permission" from the government (which I assume they had) to conduct these experiments?

Psilocybin Psilocybin[nb 1] (/ˌsɪləˈsaɪbɪn/ SIL-ə-SY-bin) is a naturally occurring psychedelic compound produced by more than 200 species of mushrooms, collectively known as psilocybin mushrooms. The most potent are members of the genus Psilocybe, such as P. azurescens, P. semilanceata, and P. cyanescens, but psilocybin has also been isolated from about a dozen other genera. As a prodrug, psilocybin is quickly converted by the body to psilocin, which has mind-altering effects similar (in some aspects) to those of LSD, mescaline, and DMT. In general, the effects include euphoria, visual and mental hallucinations, changes in perception, a distorted sense of time, and spiritual experiences, and can include possible adverse reactions such as nausea and panic attacks. History[edit] Early[edit]

My Life in the Dungeon The show has been around for almost 20 years, and it’s come back from the dead more than once. This time, though, it’s returning without its creator. After a four-year hiatus, Aaron McGruder’s The Boondocks is coming back to television without Aaron McGruder. Set in the fictional suburb of Woodcrest, Maryland, The Boondocks is an Adult Swim animated adaptation based on McGruder’s long-running comic strip of the same name. Keychain Reinvented - Keyport Slide & Blades Infusing utility with style, Keyport replaces the out-of-date keychain by streamlining your most important personal everyday items (keys, USB flash drive, mini-light, bottle opener, plus many more in development) into one indispensable device that attaches easily to any auto remote. The Keyport Slide 2.0 holds up to 6 keys and tools in a high-tech chassis about the size of a box of Tic-Tacs. Small enough to fit comfortably in the fifth pocket of a pair of jeans, the Keyport provides access to any of the items with just the slide of a thumb. It even has a serial number that assists in its recovery via Keyport’s Reward If Found program. In short, the Keyport Slide is a very useful tech gadget, a must-have fashion accessory, and the perfect gift.

Brave New World by Aldous Huxley Chapter One A SQUAT grey building of only thirty-four stories. Over the main entrance the words, CENTRAL LONDON HATCHERY AND CONDITIONING CENTRE, and, in a shield, the World State's motto, COMMUNITY, IDENTITY, STABILITY. The enormous room on the ground floor faced towards the north. Cold for all the summer beyond the panes, for all the tropical heat of the room itself, a harsh thin light glared through the windows, hungrily seeking some draped lay figure, some pallid shape of academic goose-flesh, but finding only the glass and nickel and bleakly shining porcelain of a laboratory. Wintriness responded to wintriness.

PLUR Peace Love Unity Respect, commonly shortened with PLUR, is the credo (see mantra)[1] of the rave movement and Electronic Dance Music culture. Originating from early online discussions about rave culture conducted on usenet its usage has been common since the early 1990s, where it became de rigueur on club flyers and especially on club paraphernalia advertising underground outdoor trance parties. It may be interpreted as the raver or clubber's essential philosophy of life, at least insomuch as it relates to interpersonal relationships, with basic directions on how people are expected to behave at a rave gathering. This universalist philosophy underpinning the tribal dance culture which began circling the globe with the rise of the internet, theoretically takes precedence over any chemical or musical aspects of the rave scene.[2] Within the Kandi culture, there can be a symbolic handshake that rave-goers exchange with one another.

Death by Caffeine We’ve used the very latest research to determine what’s appropriate for your body weight. See more about your daily caffeine limits. Recommendations for caffeine levels are different for aged 18 and under. History of LSD The psychedelic drug (or entheogen) lysergic acid diethylamide (LSD) was first synthesized on November 16, 1938 by the Swiss chemist Albert Hofmann in the Sandoz (now Novartis) laboratories in Basel, Switzerland.[1] It was not until five years later on April 19, 1943, that the psychedelic properties were found.[2] Discovery[edit] Albert Hofmann, born in Cyprus, joined the pharmaceutical-chemical department of Sandoz Laboratories, located in Basel as a co-worker with professor Arthur Stoll, founder and director of the pharmaceutical department.[3] He began studying the medicinal plant squill and the fungus ergot as part of a program to purify and synthesize active constituents for use as pharmaceuticals. ... affected by a remarkable restlessness, combined with a slight dizziness. At home I lay down and sank into a not unpleasant intoxicated-like condition, characterized by an extremely stimulated imagination.