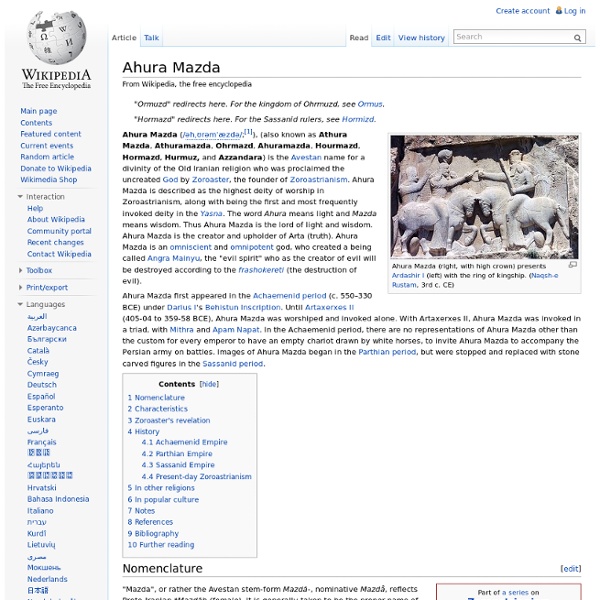 Ahura Mazda (/əˌhʊrəˌmæzdə/;[1]), (also known as Ohrmazd, Ahuramazda, Hourmazd, Hormazd, and Hurmuz, Lord or simply as spirit) is the Avestan name for a higher spirit of the Old Iranian religion who was proclaimed as the uncreated spirit by Zoroaster, the founder of Zoroastrianism. Ahura Mazda is described as the highest spirit of worship in Zoroastrianism, along with being the first and most frequently invoked spirit in the Yasna. The literal meaning of the word Ahura means light and Mazda means wisdom. Ahura Mazda first appeared in the Achaemenid period (c. 550 – 330 BCE) under Darius I's Behistun Inscription. Until Artaxerxes II (405–04 to 359–58 BCE), Ahura Mazda was worshiped and invoked alone. Nomenclature[edit] "Mazda", or rather the Avestan stem-form Mazdā-, nominative Mazdå, reflects Proto-Iranian *Mazdāh (female). The name was rendered as Ahuramazda (Old Persian) during the Achaemenid era, Hormazd during the Parthian era, and Ohrmazd was used during the Sassanian era.

Johann Wolfgang von Goethe After returning from a tour of Italy in 1788, his first major scientific work, the Metamorphosis of Plants, was published. In 1791 he was made managing director of the theatre at Weimar, and in 1794 he began a friendship with the dramatist, historian, and philosopher Friedrich Schiller, whose plays he premiered until Schiller's death in 1805. During this period Goethe published his second novel, Wilhelm Meister's Apprenticeship, the verse epic Hermann and Dorothea, and, in 1808, the first part of his most celebrated drama, Faust. His conversations and various common undertakings throughout the 1790s with Schiller, Johann Gottlieb Fichte, Johann Gottfried Herder, Alexander von Humboldt, Wilhelm von Humboldt, and August and Friedrich Schlegel have, in later years, been collectively termed Weimar Classicism. Biography[edit] Early life[edit] Goethe's father, Johann Caspar Goethe, lived with his family in a large house in Frankfurt, then an Imperial Free City of the Holy Roman Empire. Goethe.

Georgetown University Georgetown University is a private research university in Washington, D.C. Founded in 1789, it is the oldest Jesuit and Catholic university in the United States. Georgetown's main campus, located in Washington's Georgetown neighborhood, is noted for Healy Hall, a National Historic Landmark in the Romanesque revival style. Campus organizations include the country's largest student-run business and largest student-run financial institution. History[edit] Founding[edit] Civil War[edit] Union soldiers across the Potomac River from Georgetown University in 1861 Enrollment did not recover from the war until the presidency of Patrick Francis Healy from 1873 to 1881. Expansion[edit] Besides expansion of the University, Georgetown also aimed to expand its resources and student body. Jesuit tradition[edit] Students studying outside Wolfington Hall Jesuit Residence Academics[edit] Healy Hall houses classrooms and the university's executive body. Faculty[edit] University president John J.

Ori (Yoruba) Ori is a metaphysical concept important to Yoruba spirituality and philosophy. Ori, literally meaning "head," refers to one's spiritual intuition and destiny. It is the reflective spark of human consciousness embedded into the human essence, and therefore is often personified as an Orisha in its own right . In Yoruba tradition, it is believed that human beings are able to heal themselves both spiritually and physically by working with the Orishas to achieve a balanced character, or iwa-pele. When one has a balanced character, one obtains an alignment with one's Ori or divine self. Fagbemijo Amosun Fakayode. Camara, Louis, 1996. about santeria

Devil (Islam) In Islam, the Devil is known as Iblīs (Arabic: إبليس‎, plural: ابالسة abālisah) or Shayṭān (Arabic: شيطان‎, plural: شياطين shayāṭīn). In Islam Iblis is a jinni who refused to bow to Adam (ʾĀdam). The primary characteristic of the Devil, besides hubris, is that he has no power other than the power to cast evil suggestions into the chests of men, women, and jinn, although the Quran does mention appointing jinn to assist those who are far from God in a general context. "We made the evil ones friends (only) to those without faith. Iblis probably comes from the Greek Diabolos (Devil, Satan; literally, the accuser) but Islam traditionally derived the name from the Arabic verbal root balasa بَلَسَ, meaning 'he despaired'; therefore, the meaning of Iblīs would be 'he/it that causes despair'.[2] In popular Islamic culture, "Shaytan" (Arabic: شيطان‎), is often simply translated as "the Devil," but the term can refer to any of the jinn who disobeyed God and followed Iblīs. G. "Iblis".

Baal Bronze figurine of a Baal, ca. 14th–12th century BC, found at Ras Shamra (ancient Ugarit) near the Phoenician coast. Musée du Louvre. "Baal" may refer to any god and even to human officials. In some texts it is used for Hadad, a god of thunderstorms, fertility and agriculture, and the lord of Heaven. Since only priests were allowed to utter his divine name, Hadad, Ba‛al was commonly used. Nevertheless, few if any biblical uses of "Baal" refer to Hadad, the lord over the assembly of gods on the holy mount of Heaven; most refer to a variety of local spirit-deities worshiped as cult images, each called baal and regarded in the Hebrew Bible in that context as a false god. Etymology[edit] The feminine form is Baʿalah: Hebrew: בַּעֲלָה‎, Baʕalah, signifying "a mistress: -that has, a mistress";[3] Arabic: بعلـة‎, baʿalah, a rare word for "wife".[4] In modern Levantine Arabic, the word báʿal serves as an adjective describing farming that relies only on rainwater as a source of irrigation.

Dreamtime Stencil art showing unique clan markers and dreamtime stories symbolizing attempts to catch the deceased's spirit. In the animist framework of Australian Aboriginal mythology, Dreamtime is a place beyond time and space in which the past, present, and future exist wholly as one. Tribespeople could enter this alternate universe through dreams or various states of altered consciousness, as well as death, Dreamtime being considered the final destination before reincarnation. The Dreaming in Aboriginal culture[edit] Dreaming stories vary throughout Australia, with variations on the same theme. This eternal part existed before the life of the individual begins, and continues to exist when the life of the individual ends. It was believed that before humans, animals and plants came into being, their 'souls' existed; they knew they would become physical, but they didn't know when. The Dreaming, tribal law and songlines[edit] Portrayals in media[edit] Literature[edit] Film[edit] Other media[edit]

Kāla (time) Head of Kala carved on top of Kidal temple portal, East Java. Kālá (Sanskrit: काल, IPA: [kɑːˈlə]) is a Sanskrit word which means "Time".[1] It is also the name of a deity in which sense it is not always distinguishable from kāla meaning "black". It often used as one of the various names or forms of Yama. Monier-Williams's widely used Sanskrit-English dictionary[2] lists two distinct words with the form kāla. kāla 1 means "black, of a dark colour, dark-blue ..." and has a feminine form ending in ī – kālī – as mentioned in Pāṇini 4-1, 42.kāla 2 means "a fixed or right point of time, a space of time, time ... destiny, fate ... death" and has a feminine form (found at the end of compounds) ending in ā, as mentioned in the ṛgveda Prātiśākhya. According to Monier-Williams, kāla 2 is from the verbal root kal "to calculate", while the root of kāla 1 is uncertain, though possibly the same. As Time personified, destroying all things, Kala is a god of death sometimes identified with Yama.

Māori people The Māori (Māori pronunciation: [ˈmaːɔɾi], /ˈmɑːʊəri/)[6] are the indigenous Polynesian people of New Zealand. The Māori originated with settlers from eastern Polynesia, who arrived in New Zealand in several waves of canoe voyages at some time between 1250 and 1300 CE.[7][8] Over several centuries in isolation, the Polynesian settlers developed a unique culture that became known as the "Māori", with their own language, a rich mythology, distinctive crafts and performing arts. Early Māori formed tribal groups, based on eastern Polynesian social customs and organisation. Horticulture flourished using plants they introduced, and later a prominent warrior culture emerged. The arrival of Europeans to New Zealand starting from the 17th century brought enormous change to the Māori way of life. In the 2013 census, there were approximately 600,000 people in New Zealand identifying as Māori, making up roughly 15% of the national population. Etymology Naming and self-naming History Origins