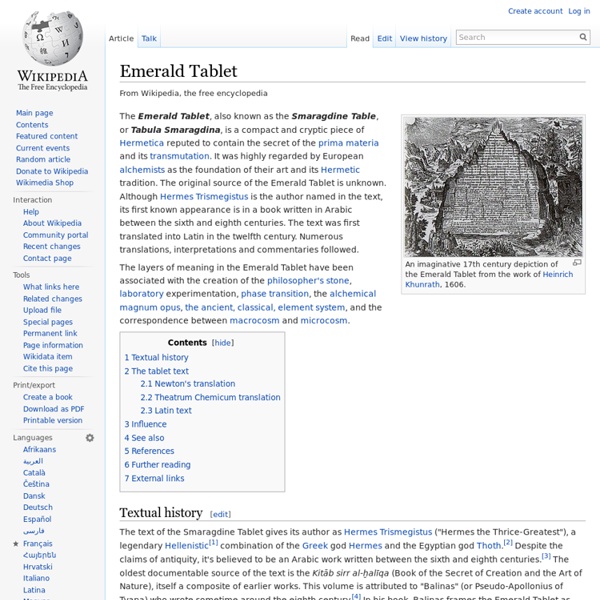 An imaginative 17th century depiction of the Emerald Tablet from the work of Heinrich Khunrath, 1606. The Emerald Tablet, also known as the Smaragdine Table, or Tabula Smaragdina, is a compact and cryptic piece of Hermetica reputed to contain the secret of the prima materia and its transmutation. It was highly regarded by European alchemists as the foundation of their art and its Hermetic tradition. The original source of the Emerald Tablet is unknown. Although Hermes Trismegistus is the author named in the text, its first known appearance is in a book written in Arabic between the sixth and eighth centuries. The text was first translated into Latin in the twelfth century. Textual history[edit] The tablet text[edit] Newton's translation[edit] A translation by Isaac Newton is found among his alchemical papers that are currently housed in King's College Library, Cambridge University.[8] Theatrum Chemicum translation[edit] Latin text[edit] Original edition of the Latin text. Influence[edit] C.G.

Dropa Stone Discs The Dropa Stone Discs As humanity searches for its extraterrestrial roots, amount the enigmatic objects found along the way are the Drop Stones of Tibet. Who were the Dropa? Heinrich Cornelius Agrippa Life[edit] Agrippa was born in Cologne on 15 September 1486. In 1512, he taught at the University of Dole in the Free County of Burgundy, lecturing on Johann Reuchlin's De verbo mirifico; as a result, Agrippa was denounced, behind his back, as a "Judaizing heretic". Agrippa's vitriolic response many months later did not endear him to the University. In 1510, Agrippa studied briefly with Johannes Trithemius, and Agrippa sent him an early draft of his masterpiece, De occulta philosophia libri tres, a kind of summa of early modern occult thought. Trithemius was guardedly approving, but suggested that Agrippa keep the work more or less secret; Agrippa chose not to publish, perhaps for this reason, but continued to revise and rethink the book for twenty years.

Intro To Curriculum Welcome to the TRUTH IS SCARY “Curriculum”…your gateway to the “Rabbit Hole”. Whether you are a new or experienced Truth Seeker, the Curriculum is meant to increase your Awareness of the Truth that exists behind the Stories that you have been told your entire life. The Curriculum is designed to stimulate your Left Brain and open up your Mind to the many versions of the Truth that exist in the Universe. Within these pages you will find short videos, full length documentaries, and Articles separated into over 20 distinct Categories that were purposely placed in a specific order. The best way to utilize the Curriculum is to start at the beginning with The Origin of Man and work your way through to Survival. The beginning topics are meant expose the lies and deception which has indoctrinated our Society throughout the ages, and reveal to you the Truth that is out there.

Chinese alchemy Chinese alchemy is a part of the larger tradition of Taoist body-spirit cultivation that developed from the traditional Chinese understanding of medicine and the body. According to original texts such as the Cantong qi, the body is understood as the focus of cosmological processes summarized in the five agents, or wu xing, the observation and cultivation of which leads the practitioner into greater alignment with the operation of the Tao, the great cosmological principle of everything. Therefore the traditional view in China is that alchemy focuses mainly on the purification of one's spirit and body in the hopes of gaining immortality through the practice of Qigong and/or consumption and use of various concoctions known as alchemical medicines or elixirs, each of which having different purposes. According to J.C. Process and purpose[edit] By refining bases into gold, the alchemist believed that immortal life would be delivered if the "fake" or synthetic gold was ingested.

The Mexican Government Reveals Mayan Documents Proving Extraterrestrial Contact The reality of extraterrestrial contact with human civilization is becoming more clear by the month as streams of information about the extraterrestrial presence and past influence hits. While some of us still have our doubts about ET contact, many are starting to realize the truth that has been talked about for centuries. One big story involves the Mexican government who has released documents and images of objects found on the site of Calakmul, Mexico which help prove the reality of ET contact. Thanks for this release can be given to the National Institute of Anthropology and History (INAH) who found these fascinating disks in Mexico. This new discovery strikes a hefty blow to the secrecy that has been purposely created surrounding the true history of our earth. The disks are of Mayan creation and were found about 80 years ago according to the INAH.

Mantra We highly value your personal information on AnastasiaDate.com, which is part of AnastasiaDate.com, and would like to bring your attention to the Privacy Policy below. You will find an explanation of what data we collect and how we protect your private details when you register and log into AnastasiaDate.com and use all related features and services on AnastasiaDate.com ("Services"). For purposes of this Privacy Policy, "AnastasiaDate.com" and "AnastasiaDate.com" refer to one and the same entity and may be used interchangeably. The Emerald Tablets of Thoth the Atlantean Dr. Doreal, who has a connection with the Great White Lodge, which also works through the Pyramid Priest-hood, was instructed to recover and return to the Great Pyramid, these Ancient Tablets. This was accomplished, but before returning them, Doreal was given permission to translate and retain a copy of the wisdom engraved on the Tablets. This was done in 1925, and now, permission has been given for this translation by Doreal to be published solely through the Brotherhood of the White Temple. This is the only authorized, original and true rendition of these Emerald Tablets. It is expected that many will scoff, yet the true student will read between the lines and gain wisdom.

The Secret of the Golden Flower Translations[edit] "Gathering the light" -- an illustration of the first stage of meditation There are significant differences between the Wilhelm and Cleary translations. The 10,000 year-old Sumerian space maps, dictated by ET Homo Sapiens from Planet Nibiru Excerpt from “Anunnaki: legacy of the Gods, techno-savvy ET s from the Planet Nibiru who came for gold, created us from their genome to work the mines, posed as Gods, decided to let us drown, but then decided to breed us to work for them.” Sumerians’ rocket route maps and clay tablets show planets past eye-range. The Sumerians wrote that giant people, whom the Sumerians called “Anunnaki” or Those-Descended-from-the-Sky, said they came from the planet Nibiru 450,000 years ago. The Nibirans were 7-12 foot-tall Homo Sapiens goldminers who came mine Earth’s gold. Clay tablet in the ruins of the Royal Library at Nineva shows how to go through inner solar system.

Essential Advice On Meditation by Sogyal Rinpoche ESSENTIAL ADVICE ON MEDITATION excerpts from Teachings by Sogyal Rinpoche When you read books about meditation, or often when meditation is is presented by different groups, much of the emphasis falls on the techniques. In the West, people tend to be very interested in the "technology" of meditation. However, by far the most important feature of meditation is not technique, but the way of being, the spirit, which is callled the "posture", a posture which is not so much physical, but more to do with spirit or attitude. It is well to recognize that when you start on a meditation practice, you are entering a totally different dimension of reality.

A Hyper-History of the Emerald Tablet The Emerald Tablet The Emerald Tablet is one of the most revered documents in the Western World, and its Egyptian author, Hermes Trismegistus, has become synonymous with ancient wisdom. His tablet contains an extremely succinct summary of what Aldous Huxley dubbed the "Perennial Philosophy," a timeless science of soul that keeps popping up despite centuries of effort to suppress it. The basic idea is that there exists a divine or archetypal level of mind that determines physical reality, and individuals can access that realm through direct knowledge of God. The teachings of Hermes -- the Hermetic tradition -- is one of the oldest spiritual traditions in the world, and while no direct evidence links the Emerald Tablet to Eastern religions, it shares uncanny similarities in concepts and terminology with Taoism, Hinduism, and Buddhism.