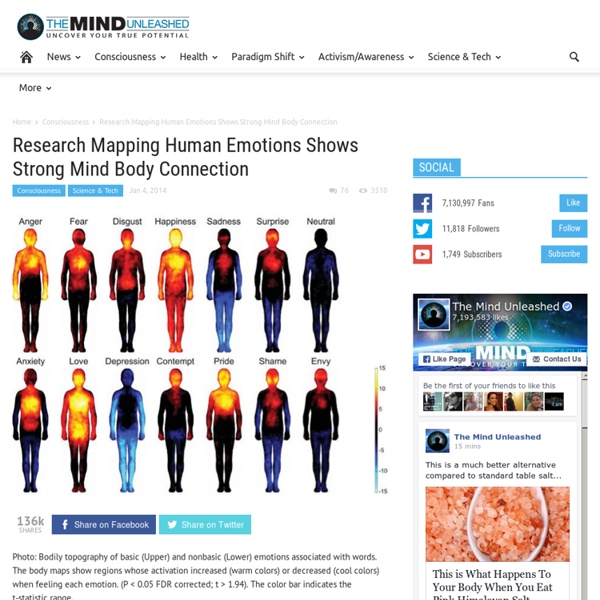 Photo: Bodily topography of basic (Upper) and nonbasic (Lower) emotions associated with words. The body maps show regions whose activation increased (warm colors) or decreased (cool colors) when feeling each emotion. (P < 0.05 FDR corrected; t > 1.94). The color bar indicates the t-statistic range. Love makes us warm all over, and now scientists are creating body maps to prove it. A team of scientists in Finland has used a topographical self-reported method to reveal the effects that different emotional states have on bodily sensations. Most basic emotions were associated with sensations of elevated activity in the upper chest area, likely corresponding to changes in breathing and heart rate (1). Research on behavioral and physiological responses to emotions could help in understanding mood disorders such as anxiety and depression. “Emotions coordinate our behavior and physiological states during survival-salient events and pleasurable interactions. About the Author Credits: WakingTimes.

Leadership and Motivation - John Adair Most would agree that good people are essential to business success. Yet many good people do not contribute as much as they could do because they lack that magic quality - motivation. So what makes the difference, and how is it relevant to you in your work? In his book 'Leadership and Motivation', John Adair looks at the factors that influence motivation in a business context and identifies some specific drivers in the context of Action-Centred Leadership. The Fifty - Fifty Rule Reviewing the evidence, Adair concludes that people are motivated half from within and half by the environment they work in, and particularly by the quality of leadership they experience. Motivating Others Adair identifies 8 key ways in which leaders influence others to feel motivated and therefore more engaged in their work: "It is a fine thing to have ability, but the ability to find ability in others is the true test" Elbert Hubbard

Rethinking the Placebo Effect: How Our Minds Actually Affect Our Bodies by Maria Popova The startling physiological effects of loneliness, optimism, and meditation. In 2013, Neil deGrasse Tyson hosted a mind-bending debate on the nature of “nothing” — an inquiry that has occupied thinkers since the dawn of recorded thought and permeates everything from Hamlet’s iconic question to the boldest frontiers of quantum physics. That’s precisely what New Scientist editor-in-chief Jeremy Webb explores with a kaleidoscopic lens in Nothing: Surprising Insights Everywhere from Zero to Oblivion (public library | IndieBound) — a terrific collection of essays and articles exploring everything from vacuum to the birth and death of the universe to how the concept of zero gained wide acceptance in the 17th century after being shunned as a dangerous innovation for 400 years. As Webb elegantly puts it, “nothing becomes a lens through which we can explore the universe around us and even what it is to be human. Illustration by Marianne Dubuc from 'The Lion and the Bird.'

Frequencies of Brilliance - Enter Doorways to Remembrance of YOUR Unlimited Self Why we need to groom leaders who can handle ambiguity and complexity How do we typically select and train our leaders? They learn theories of leadership that often assume organizations are mostly stable, and that the environment and the people within them are predictable. Oh, yes, there is some attention paid to what to do in crisis, usually as a singular event, with an expectation to return to the norm. But the world today is highly unpredictable, and rapid and significant change is the norm. Scott Anthony, in an article in the Harvard Business Review Online , argues that we may be preparing leaders the wrong way. Part of the problem, Anthony says, is that we judge leaders by what they have done in the past, and they have a tendency to stick to what they do best and know, rather than venture into "white water" or unknown territory. The authors argue that the job of leadership during a sustained crisis is fraught with peril.

Chakras undefined Chakras - our 'invisible' organs Back to Breatharian page Since chakras showed to have such a vital part in breatharianism, I thought it appropriate to dedicate an entire page to them. Knowledge about the chakras is very important and useful for the aspiring breatharian. -The Seven Chakras- Our body is much more than what our eyes tell us. Chakras are like the non-physical organs. On the picture (above) our seven main chakras. The chakras support our body with energy. ... A chakra will support bodily functions. Red chakra is the first one. Orange chakra is the second one. Some people do not have their yellow chakra active. When the green chakra is activated, the person has reached an emotionally deeper understanding of oneself and of others. Blue chakra is often weak in people unless we're dealing with a very charismatic person. Indigo chakra is related to intuition, spiritual abilities, our senses physical as well as beyond the average. -Seven Chakras, Seven Dimensions- Conclusion