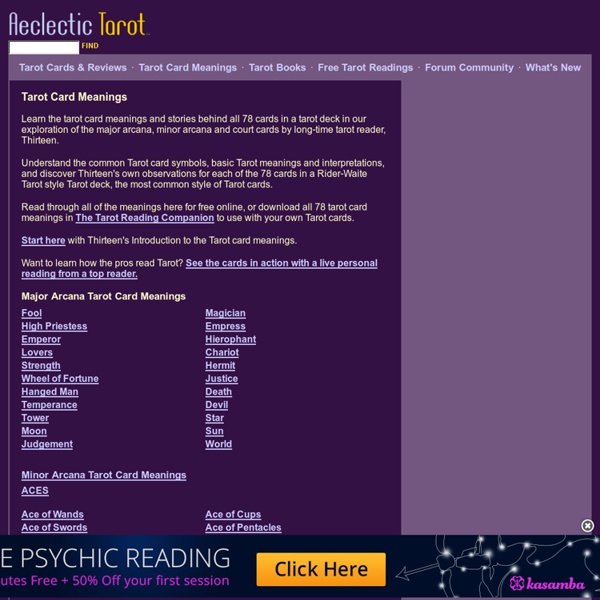 Tarotphelia's Daily Spread I made up this spread because I was dissatisfied with just one card for a day- I like a spread that gives more specifics. 1. What I should do today. 2. What I shouldn't do today. 3. 4. 5. People not might be comfortable asking for so much direction, but I have found it very useful. There are sometimes relationships between the positions to watch for. The unexpected & the spiritual advice cards can come in very handy to to tip you off to stressful or nice things coming , and give you a direction for how to deal with them the best way. If the cards are layed out and seem to have no relation to one another, sometimes it is a general message to be taken as a whole, rather than based on the meanings of the positions. Tarotphelia

Tarot Card Meanings Today's Tarot deck has fixed upon the 78 card standard that was popular in Northern Italy during the 16th century. The cards of the Major Arcana usually represent significant issues in the life of the Querent. They are key principles core to human life, such as life and death, ethical dilemmas, spirituality, and interaction with other people. One can view the Major Arcana as spiritual chart that the Querent can use to plot their course as they make their journey through life and beyond. The Minor Arcana often deal with the mundane and superficial, and how the Querent reacts to them. However, when doing a reading the distinctions between Minor and Major often blur, as the cards interact with each other and paint a seamless picture of the Querent's life and influences. The following Tarot card meanings are the interpretations I have been using for decades, evolving from years of experience and study. Major Arcana Card Meanings Minor Arcana Tarot Meanings The Suit of Cups The Suit of Swords

Daily Reading to Learn Tarot While almost asleep last night, I came up with a simple 3 card spread to help me learn the Tarot deeper (which, as we know, is a continual - if not life-long - process!) Traditionally, when trying to delve deeper into the Tarot it's suggested that you do a daily reading with either a single card or a ppf spread. Drawn randomly, it has occured to me that it would take "forever" before each of the cards would be read in any one position (the scientific half of my brain spins at the thought of the statistical improbablity)... So, I'm pretty sure that this spread is a result of me being a bit impatient for each card to 'randomly' fall into place (and maybe a bit of a result of how brilliant I am right before I fall asleep! <hee hee>) For this spread, I've divided the deck into Majors, Minors, and Court cards. ..1.. In position 1, I'll draw a Major that represents a lesson or situation for the day. Any comments are appreciated!

Sample Tarot Reading | Adana Wtn I love working with people who are looking to get clear about the present so that they can change their future. I work with tarot to offer my clients insights on how their thoughts and emotions are affecting their lives in the areas of love, relationships, work, business and family lives. Here’s a sample tarot reading to show you how I get down The question for this reading is: How can I get a promotion at work by the end of the first quarter? I used my favorite nine-card spread for this tarot reading. Here’s what I got. Cards from the Kundalini Tarot Deck 1. In the past you’ve taken this job rather seriously. 2. Right now you’re ready for a new challenge. 3. It seems that in the immediate future, your boss is going to notice your efforts and your hard work. 4. This is the Happily Ever After card. 5. The Ace of Wands is about the spark of passion. 6. I like to sum up The Moon in two words: Ignore distractions. 7. The Four of Pentacles is about the downside of stability. 8. 9.

Salem Tarot: Tarot Card Meanings If you're just learning how to read Tarot cards, this chapter of our site should give you a great head start. Here we present our own take on the meanings of the popular Rider Waite Tarot deck. We feel this is one of the best decks to learn with (and stay with) because it has so many symbols hidden within its imagery for you to interpret. The most powerful cards of the Tarot are the Major Arcana, also known as the Trumps. The ancestors of the modern playing cards, the Minor Arcana represent the mundane in our lives, the daily events and situations that are represented by the ancient elements of Water, Fire, Air, and Earth. The Suit of Cups Symbolizing the element of Water in the Tarot, the suit of Cups represents the full range of emotions from romantic love, to sorrow, friendship, to loneliness. The Suit of Wands The Wands represent our courage and passions as indicated by the suit's association with the element of Fire.