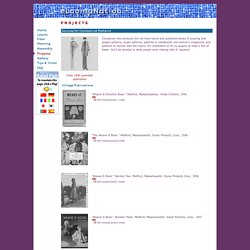 Weave two rectangles in the pattern below, weaving in ends before you remove them from the loom. 2. Place wrong sides together. (Front and back are different!) Windowpane Lace (Weavette book of patterned weaves calls this “Corduroy”.) The graph below illustrates this pattern. Rows with light gray squares are NOT INCLUDED in row count, since they are already on the loom. White squares represent the vertical warp threads that are visible. Again: White=visible warp. The threads wrapped around outside of pins are not included in the count or shown on the graph. The pattern repeats all the way to the top, but because the square or rectangle must end with plain weave, there will be 4 plain weave rows at the end. Pattern Library. PLEASE NOTE – An updated version of the Birka pattern was uploaded on 27th Feb 2014. 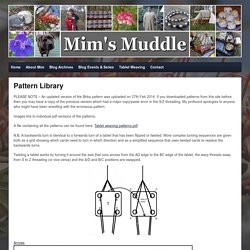 If you downloaded patterns from this site before then you may have a copy of the previous version which had a major copy/paste error in the S/Z threading. My profound apologies to anyone who might have been wrestling with the erroneous pattern. Images link to individual pdf versions of the patterns. A file containing all the patterns can be found here: Tablet weaving patterns.pdf N.B. Twisting a tablet works by turning it around the axis that runs across from the AD edge to the BC edge of the tablet, the warp threads swap from S to Z threading (or vice versa) and the A/D and B/C positions are swapped.

Tablet Weaving Cards For Card Weaving Inkle par thewienerdogranch. Tablet-Woven DPN Holder. One of the first questions I'm asked when I teach tablet weaving is, "Where can I buy the tablets? 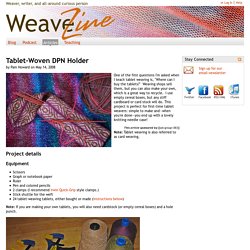 " Weaving shops sell them, but you can also make your own, which is a great way to recycle. I use empty cereal boxes, but any stiff cardboard or card stock will do. Backstrap Weaving. Laverne, 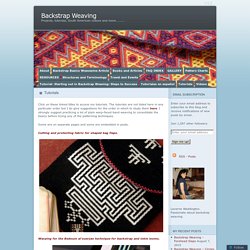 Threads of my life. Just finished another band on my inkle loom. 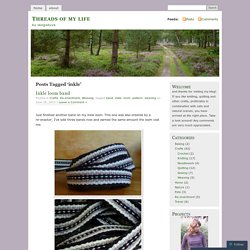 This one was also ordered by a re-enactor; I’ve sold three bands now and earned the same amount the loom cost me. It resembles much the first band I ever wove, but this one has an extra stripe of dark brown along the edge. When I look at the pictures of my first band I’ve definitely improved my weaving! My goodness, the edges of that first one are so wonky. As_belt.JPG (JPEG Image, 1992 × 443 pixels) - Scaled (51%) Weave-Away: Weave your own labels. I really have been thinking hard about custom made labels lately to label my stuff with, but I don't really want to spend the money to get them. 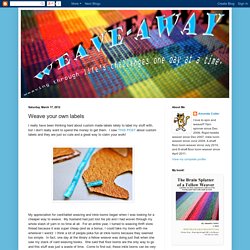 I saw about custom labels and they are just so cute and a great way to claim your work! My appreciation for card/tablet weaving and inkle looms began when I was looking for a cheaper way to weave. My husband had just lost his job and I had woven through my whole stash of yarn in no time at all. For an entire year, I turned to weaving thrift store thread because it was super cheap (and as a bonus, I could take my loom with me wherever I went)!

I think a lot of people poke fun at inkle looms because they seemed too simple. Tricks and Tips: Finishing. Fringe Benefits: Finishing Techniques for Weaving Fringe. Once you’ve finished weaving a piece, it’s time to deal with the loose ends. 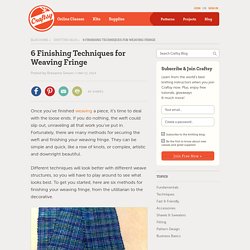 If you do nothing, the weft could slip out, unraveling all that work you’ve put in. Fortunately, there are many methods for securing the weft and finishing your weaving fringe. They can be simple and quick, like a row of knots, or complex, artistic and downright beautiful. Different techniques will look better with different weave structures, so you will have to play around to see what looks best. To get you started, here are six methods for finishing your weaving fringe, from the utilitarian to the decorative. Photo via Craftsy member Ptarmigantoes 1. With good reason, most weavers begin with a simple row of overhand knots. 2. By varying the number of threads and location of overhand knots, you can create fancy patterns in your fringe. 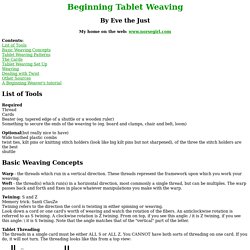 These threads represent the framework upon which you work your weaving.Weft - the thread(s) which run(s) in a horizontal direction, most commonly a single thread, but can be multiples. The warp passes back and forth and fixes in place whatever manipulations you make with the warp. Twining: S and Z Memory trick: Santi ClauZe Twining refers to the direction the cord is twisting in either spinning or weaving. Rams Horn Pack Idling Tablet Weaving Pattern » The Barony of Allyshia. The rams horn motif as the central part of a wider silk band. 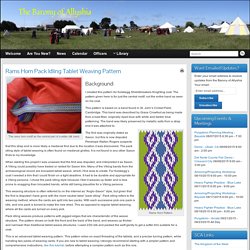 I created this pattern for Kolskegg Shieldbreakers Knighting coat. The pattern given here is for just the central motif, not the entire band as seen on his coat. This pattern is based on a band found in St. John’s Cricket Field, Cambridge. This band was described by Grace Crowfoot as being made from a bast fiber, originally dyed blue with white and darker blue patterning. Finchingefeld's Fancies: Advanced Card Weaving: Ram's Horn Pattern. I've been watching a card weaving Facebook page and several people have asked about how to do the Ram's Horn pattern. 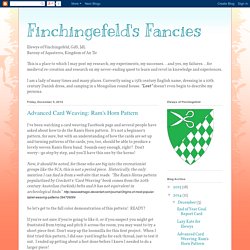 It's not a beginner's pattern, for sure, but with an understanding of how the cards are set up and turning patterns of the cards, you, too, should be able to produce a lovely woven Ram's Horn band. Sounds easy enough, right? Don't worry--go step by step, and you'll have this one by the horns! Now, it should be noted, for those who are big into the recreationist groups like the SCA, this is not a period piece. The Ancient Craft of Tablet Weaving: Getting Started. This document is provided as is without any express or implied warranties. While every effort has been taken to ensure the accuracy of the information contained, the author assumes no responsibility for errors or omissions, or for damages resulting from the use of the information contained herein. Permission is granted to make and distribute verbatim copies of this document for non-commercial private research purposes provided the copyright notice and this permission notice are preserved on all copies.

Website mirroring is permitted by express prior arrangement. Permission will only be granted if the document is posted in its entirety and the content and format of the document remain completely unaltered by the mirroring site. The definitive version of this document can be found at Copyright © 2003 Shelagh Lewins. Tablet Weaving. Tablet Weaving. Tablet Weaving - An Introduction - Tablet Weaving- An Introduction -By Lady Pelagia Egyptian Diagonals This method is called Egyptian Diagonals, as the woven pattern often resembles designs on clothing depicted in ancient Egyptian paintings. However, there is no physical evidence for tablet weaving earlier than the 22nd dynasty. Warp with two light/two dark threads per card for the pattern to the right, per the diagram. Turn all cards away for four turns. Then, at the right hand side, slide two cards forward of the main pack. Silkewerk - Tubular Tablet Weaving. Tubular Tablet Weaving Identifying and Reconstructing the Hanging Cord from a 14th Century Embroidered Purse.

(This article was originally published in the Spring 2008 issue of TWIST) There's a pretty little 14th century purse in the Victoria and Albert Museum #8313-1863. Although its German brick stitch embroidery usually captures the most attention, the purse also happens to include a carrying cord and several loop braided drawstrings with tassels. Silkewerk - Tablet Weaving Diagonal Patterns. Tablet Weaving Diagonal Patterns (This page is still under construction.) Definitions: Step - The sequence a pair of identically colored threads will take from one card to the next, read from left to right across the pack.

Tablet Weaving Notes. Your Cards I've decided that my ideal tablet weaving cards are actually playing cards. You can get a couple of decks of playing cards from the dollar store and make lots and lots of tablet weaving cards for not much money. They're designed to hold up to shuffling etc, and they're coated with something that makes them nice and smooth. All you have to do is sacrifice one card as a template, fold it diagonally so that you can cut along the short edge to get a nice square, then round the corners. To punch the holes, I folded the card diagonally the other way, so that I knew where the center point was. Carto'magic. Tutoriel tissage tablettes. Ceci est un tutoriel destiné aux débutants, pour commencer le tissage aux tablettes!