View from the ISS at Night 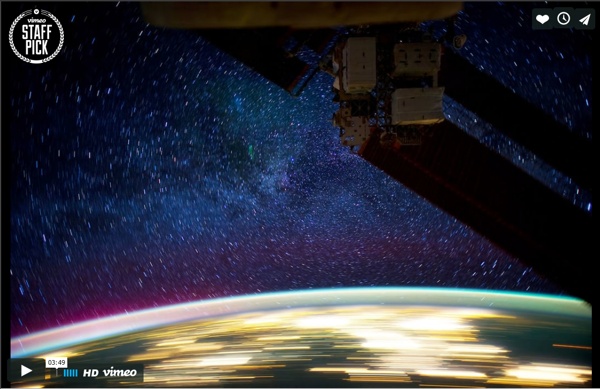 Your Age on Other Worlds Want to melt those years away? Travel to an outer planet! <div class="js-required"><hr> This Page requires a Javascript capable browser <hr></div> Fill in your birthdate below in the space indicated. (Note you must enter the year as a 4-digit number!) Mars 'has life's building blocks' 24 May 2012Last updated at 21:13 ET By Mark Mardell North America editor The researchers suggest Mars has "been undertaking organic chemistry for most of its history" New evidence from meteorites suggests that the basic building blocks of life are present on Mars.

The Scale of the Universe Interactive Discover the cosmos! Each day a different image or photograph of our fascinating universe is featured, along with a brief explanation written by a professional astronomer. 2012 March 12 A Laser to Give the Universe a Hernia? Think back to 2008, when the Large Hadron Collider (LHC) was about to be switched on for the first time. Remember all those “micro-black hole,” “spacetime-ripping,” “stranglet-creating” doomsday headlines? TOP 5: Misconceptions About the LHC Although much of the hype was complete nonsense, those pesky physicists are at it again; they want to build a laser so powerful that it will literally rip spacetime apart. (Keanu Reeves, over to you.) The headlines write themselves.

Future - Touch screen tech to reboot a space station Imagine working in the most expensive office ever built – and not only having to work on an outdated computer system but also having to go to a corridor to do it. This is exactly what astronauts on the International Space Station (ISS) have to do. We might think something that cost $150bn and orbits the Earth would have the very latest technology, or look as sleek as the space stations we see in films.

Synapse There are two fundamentally different types of synapses: In a chemical synapse, electrical activity in the presynaptic neuron is converted (via the activation of voltage-gated calcium channels) into the release of a chemical called a neurotransmitter that binds to receptors located in the plasma membrane of the postsynaptic cell. The neurotransmitter may initiate an electrical response or a secondary messenger pathway that may either excite or inhibit the postsynaptic neuron.

Incredible Space Pics from ISS by NASA astronaut Wheelock Go Discovery! It was October 23, 2007 at 11:40am EST when I had my first ride to space on Discovery. She’s beautiful… just sad that this will be her last voyage. Looking forward to climbing aboard the flight deck when Discovery arrives at the Space Station in November. (9-23-2010). Incredible Photos from Space: Larry Tanner, NASA. john locke » Blog Archive » visualizing sound in processing This was the final applet in motion. Using the minim library for processing, each waveform is generated in realtime as the two sounds play over eachother creating a pretty chaotic sound, but there are some instances of overlapping patterns where the mashup works pretty well. In the third version of the code, the boolean of the two waveforms is generated, producing a new way to visualize the waveforms. View the youtube video here, but I really need to figure out a way to add sound to the video, silence doesn’t do it justice.

This Will Mindfuck You: The Double-Slit Experiment The video below shows scientific proof that there is something NOT quite logical or scientific about this universe. The mere act of observation can completely change the outcome of an event! Before I get too ahead of myself, you need to watch the video below to understand: Super-Earths 'in the billions' 28 March 2012Last updated at 06:17 ET By Jonathan Amos Science correspondent, BBC News, Manchester Liquid water is considered essential if a planet is to support life Project Eden In this post, I'll be describing in more detail how the CG Earth is constructed. The whole planet was broken down into several key components: land, water, clouds, atmosphere and an atmospheric "rim". The atmosphere has two components because it's not a true volumetric simulation, but a kind of hack ^^; Land Nothing fancy here that's not been done for decades. A simple sphere primitive with polar (spherical) UV projection so that the Blue Marble textures can be wrapped around it.

Black holes growing faster than expected › News in Science (ABC Science) News in Science Thursday, 17 January 2013 Stuart GaryABC Black hole find Existing theories on the relationship between the size of a galaxy and its central black hole are wrong according to a new Australian study. The discovery by Dr Nicholas Scott and Professor Alister Graham, from Melbourne's Swinburne University of Technology, found smaller galaxies have far smaller black holes than previously estimated. Central black holes, millions to billions of times more massive than the Sun, reside in the core of most galaxies, and are thought to be integral to galactic formation and evolution. However astronomers are still trying to understand this relationship.