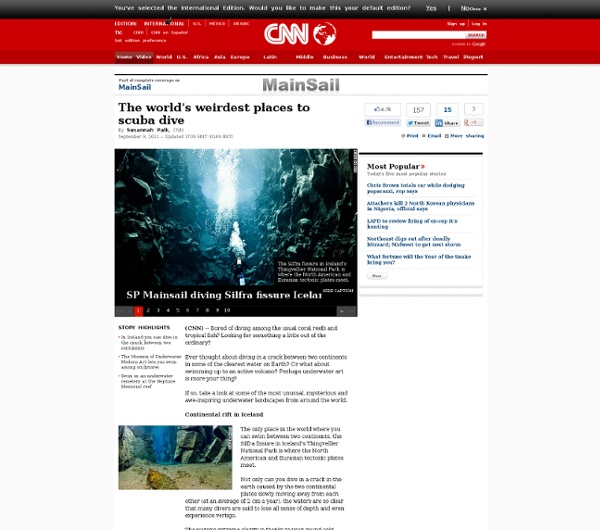 The Silfra fissure in Iceland's Thingvellier National Park is where the North American and Eurasian tectonic plates meet. The water is so clear many divers are said to lose all sense of depth and even experience vertigo. The mysterious underwater ruins of Yonaguni, Japan are estimated to be between 5,000 and 8,000 years old. Some claim the ruins to be evidence of a long lost city, while others are convinced it is a geological phenomenon. The submerged active volcano of Banua Wuhu in Indonesia seen releasing ribbons of silver bubbles of sulfur gas. The volcano's barren sulfur-covered rocks give way to coral reefs and an extraordinary display of marine life the deeper down you explore. The Museum of Underwater Modern Art in Cancun, Mexico, holds over 403 permanent life-size sculptures and is one of the largest artificial reef attractions in the world. The Neptune Memorial Reef in Miami, Florida, is an artificial reef which doubles as a cemetery. SP Mainsail diving Silfra fissure Iceland 1

The girl who keeps dreaming Top 10 Civilizations That Mysteriously Disappeared Throughout our history, most civilizations have either met a slow demise or were wiped out by natural disasters or invasion. But there are a few societies whose disappearance has scholars truly stumped: 10. The Olmec One of the first Mesoamerican societies, the Olmec inhabited the tropical lowlands of south-central Mexico. Where did they go? Around 400 BC the eastern half of the Olmec’s lands was depopulated- possibly due to environmental changes. 9. The Nabateans were a Semitic culture that inhabited parts of Jordan, Canaan and Arabia from around the sixth century BC. During the fourth century AD, the Nabateans abandoned Petra and no one really knows why. 8. The Aksumite Empire began in the first century AD in what is now Ethiopia and is believed to be the home of the Queen of Sheba. According to local legend, a Jewish Queen named Yodit defeated the Aksumite Empire and burned its churches and literature. 7.The Mycenaeans 6. 5.The Cucuteni-Trypillian Culture 4. 3.The Minoans 2.The Anasazi 1.

art 101 Short Stories that Will Leave You Smiling, Crying and Thinking post written by: Marc Chernoff Email Since its inception eighteen months ago, our sister site Makes Me Think (MMT) has truly evolved into a remarkable online community. Every day, users share their thought-provoking life stories and vote on stories that other users have shared. As stated on the MMT About page, sometimes the most random everyday encounters force us to stop and rethink the truths and perceptions we have ingrained in our minds. I believe the 101 stories listed below perfectly fulfill that description. What do you think? american tv Your Age on Other Worlds Want to melt those years away? Travel to an outer planet! <div class="js-required"><hr> This Page requires a Javascript capable browser <hr></div> Fill in your birthdate below in the space indicated. (Note you must enter the year as a 4-digit number!) The Days (And Years) Of Our Lives Looking at the numbers above, you'll immediately notice that you are different ages on the different planets. The earth is in motion. The top-like rotation of the earth on its axis is how we define the day. The revolution of the earth around the sun is how we define the year. We all learn in grade school that the planets move at differing rates around the sun. Why the huge differences in periods? Johannes Kepler Tycho Brahe Kepler briefly worked with the great Danish observational astronomer, Tycho Brahe. Here you see a planet in a very elliptical orbit. Kepler's third law is the one that interests us the most. Let's just solve for the period by taking the square root of both sides: Isaac Newton