Huge mirror of the world 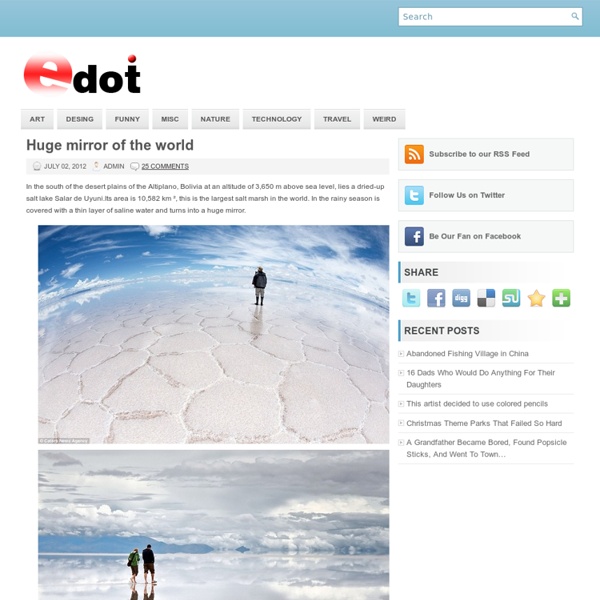 In the south of the desert plains of the Altiplano, Bolivia at an altitude of 3,650 m above sea level, lies a dried-up salt lake Salar de Uyuni.Its area is ​​10,582 km ², this is the largest salt marsh in the world. In the rainy season is covered with a thin layer of saline water and turns into a huge mirror.

Absolutely Amazing Photography by Edgar Moskopp - Smashing Picture  Please keep in mind that some photos are processed with HDR in Photomatix, with Brightness, Contrast, Selective Color, Color Balance, dodging, burning, unsharp mask, Retouching, selective de-noising in Photoshop CS3 and panorama composition in Autopano Pro. By Edgar Moskopp See more photos on his Flickr stream ↑ Back to top 27 must-sees on this incredible planet Editor's Note — This article was originally published in July 2012 and additions and updates were made in 2015. Prices and excursions are subject to change. (CNN) — Temples that tower out of mist-cloaked jungles; a herd of wildebeest, one million-strong, trekking across the African plains; a midnight sky filled with stars. There are some things around the world that provide photo-showing rights for decades. We haven't got them all -- in fact we barely scratched the surface.

DIY Découpage Floral Bag - Honestly WTF When H&M asked us to DIY a boho-inspired item for their summer issue, découpage was the first thing that came to mind. Honestly, does it get any better than customizing a simple handbag with a brilliant floral print? However you create it, it’ll be satisfying to know that you’ve designed yourself a one of a kind bag! Store Design : Theurel+Thomas by Anagrama How do you show off lovely edibles like those created by Theurel & Thomas, especially when they are already so beautiful to look at standing alone? Well, to pay homage to the business’ first patisserie in San Pedro, Mexico and to the most popular dessert of all of the French pastries, Anagrama studio ran with a concept that fulfills both your sweet tooth and an eye for amazing modern design. Situated in one of the most exclusive suburbs, the new minimalist space has captured the attention of design enthusiasts and lovers of the dessert spciality.

Top 20 Earth Pictures found on Stumble Upon Everybody knows that Stumbleupon is an great source for beautiful photography, nature, pets, arts and much more. They have millions of users and they are probably the most wide used source for finding quality content. Today, we collected 20 popular photographs from Stumbleupon. Walk through “Your Rainbow Panorama” in Denmark EmailEmail Now reaching the rainbow became possible with the new installation named “Your rainbow panorama” of the Danish-Icelandic artist Olafur Eliasson. The new project was opened on the 28th of May 2011 on the top of the ARoS Aarhus Kunstmuseum in Århus, Denmark. Best Ways to Breath While Running, Running Tips Breathing, Breathing Techniques In Running, Breathing Running, Proper Breathing While Running Posted by on June 19th, 2009 <div class="greet_block"><div class="greet_text"><div class="greet_image"><a href=" rel="nofollow"><img src=" alt="WP Greet Box icon"/></a></div>Hello there! If you are new here, you might want to <a href=" rel="nofollow"><strong>subscribe to the RSS feed</strong></a> for updates on this topic.<div style="clear:both"></div><div class="greet_block_powered_by"><a href=" title="WP Greet Box WordPress Plugin">Powered by WP Greet Box</a></div><div style="clear:both"></div></div></div>

8 Most Colorful Cities on Earth — enpundit When an entire city wraps itself in the colors of the rainbow, we are reminded that our personal environments do not need to merely consist of red brick, gray steel and beige stone. Around the globe, there are eight vibrant cities in particular that burst with color and resemble a newly opened box of crayons. Take a look and let us know if there should be any other colorful cities added to the list.