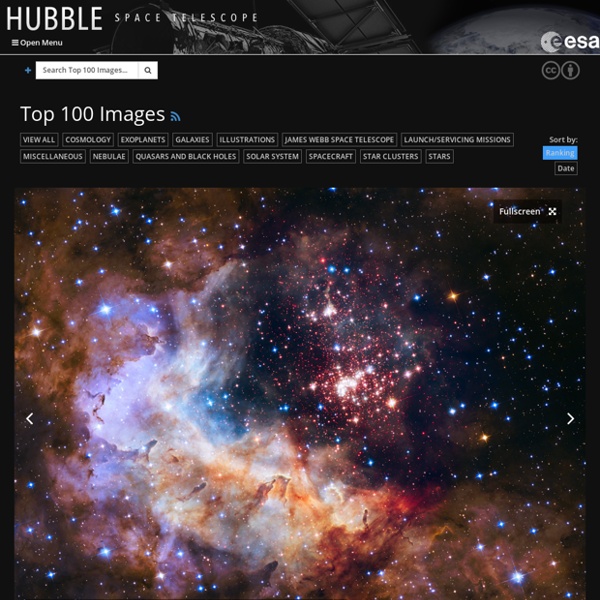 Robert Lanza, M.D. – BIOCENTRISM » A New Theory of the Universe Biocentrism builds on quantum physics by adding life to the equation “Any short statement does not do justice to such a scholarly work. Lanza proposes a biocentrist theory which ascribes the answer to the observer rather than the observed. The work is a scholarly consideration of science and philosophy that brings biology into the central role in unifying the whole.”Nobel Prize Winner E. Wallpaper Videos See the universe come to life via animations, scientific visualizations, expert commentary, and more.

Hubble data predicts Milky Way galactic collision When Galaxies Collide! It sounds like an early science fiction novel. However, analysis of Hubble measurements shows that our own Milky Way galaxy is moving toward a head-on collision with our nearest neighbor, the Andromeda galaxy (also known as M31). The collision will start in about four billion years, and over the following three billion years the two spiral galaxies will coalesce into a large elliptical galaxy. Based on this data, NASA has produced a video of the upcoming collision. View all Planets Align: Panerai Jupiterium - WatchWow Making its appearance for the first time in Singapore from 13 December to 14 February 2014 is the Panerai Jupiterium. This device is a planetarium-clock showing the position of the sun, moon and Jupiter with its four satellites, from the viewpoint of an observer from Earth. Specially created as a tribute to Galileo Galilei when he first spotted Jupiter’s four satellites in 1610, watch aficionados can appreciate real time movement of the planetarium-clock which reveals the actual positions of Jupiter. Above: The four satellites around Jupiter are represented by rotating orbs

The Telescope - Team Hubble Goddard Space Flight Center is home to the Space Telescope Operations Control Center for Hubble. Gathering images from space is more than a "point and shoot" proposition. The Hubble Space Telescope explores our universe 24 hours a day, 365 days a year. Operating and maintaining such a tireless observatory and converting its raw data (digital signals) into images requires considerable effort from the people on the ground. Operating Hubble

Total Solar Eclipse 2012 photos, near Mount Carbine, Queensland, Australia November 14, Queensland, Australia Homepage Astrophotos Australia 2012 photos Purchase Photos! Total Solar Eclipse of November 14, 2012, as seen from a hilltop about 20 miles west of the Outback town of Mount Carbine, Queensland, along the Mulligan Highway (Peninsula Development Road), a road only paved in recent years. Heading inland to get away from coastal showers and clouds which were promising to interfere with the viewing, we drove some 150 miles into the outback to find a good spot the day before and settled upon a remote hillside, up along a dirt track that pulled away from the main road. The location was about 40 miles inland, and 67 miles from Cairns, as the crow flies. About 20 other cars camped out here as well under very dark skies.

Weekend Feature: NASA-ESA Announce Europa Mission -Search for Life on Jupiter's Water Worlds With input from scientists around the world, American and European scientists working on the potential next new mission to the Jupiter system have announced their joint vision for the Europa Jupiter System Mission to explore "the emergence of habitable worlds around gas giants." The proposed Europa Jupiter System Mission would provide orbiters around two of Jupiter's moons: a NASA orbiter around Europa called the Jupiter Europa Orbiter, and an ESA orbiter around Ganymede called the Jupiter Ganymede Orbiter. "We've reached hands across the Atlantic to define a mission to Jupiter's water worlds," said Bob Pappalardo, the pre-project scientist for the proposed Jupiter Europa Orbiter, who is based at NASA's Jet Propulsion Laboratory. "The Europa Jupiter System Mission will create a leap in scientific knowledge about the moons of Jupiter and their potential to harbor life."

Best Photo Yet of An Exoplanet It's just a few small pixels, but the image above marks a giant leap for our capacity to explore worlds beyond the influence of the sun. Taken with the Gemini Planet Imager, recently fitted to the Gemini South telescope in Chile, the bright dot represents Beta Pictoris b, one of the most famous planets beyond the solar system. The larger circle, looking like the freeze frame of a drop of water after it has landed on a pond, is centred on the star Beta Pictoris itself, after its light was subtracted so that it would not overwhelm the planet itself. The Planet Imager was specifically designed for such work, with “Advanced adaptive optics, diffraction control, a near-infrared spectrograph, and an imaging polarimeter” according to the team that took this image.

Hubble zooms in on a space oddity A strange, glowing green cloud of gas that has mystified astronomers since its discovery in 2007 has been studied by Hubble. The cloud of gas is lit up by the bright light of a nearby quasar, and shows signs of ongoing star formation. One of the strangest space objects ever seen is being scrutinised by the penetrating vision of the NASA/ESA Hubble Space Telescope. A mysterious, glowing green blob of gas is floating in space near a spiral galaxy.

NASA spacecraft due for rendezvous with comet Tempel 1 It's not exactly young love, but some might find it romantic. On Valentine's Day, an aging Lothario that has been flitting from beauty to beauty through the solar system will make his final stop, taking pictures of a battered dowager to send to the folks back home before disappearing forever. The Stardust spacecraft, which has already taken images of asteroid Annefrank and captured interstellar dust from comet Wild 2, on Monday night will swing by comet Tempel 1. There, it will take new pictures of the devastation wrought on the comet by NASA's 2005 Deep Impact mission. In that historic encounter six years ago, the Deep Impact spacecraft released an 820-pound probe that crashed into Tempel 1 at 23,000 mph, sending a luminous plume of debris into space and allowing researchers to determine what the comet was made of. There was so much debris, in fact, that the spacecraft could not get a clear look at the impact crater.

Hubble Telescope Reveals Deepest View of Universe Ever The Hubble Space Telescope has captured the farthest-ever view into the universe, a photo that reveals thousands of galaxies billions of light-years away. The picture, called eXtreme Deep Field, or XDF, combines 10 years of Hubble telescope views of one patch of sky. Only the accumulated light gathered over so many observation sessions can reveal such distant objects, some of which are one ten-billionth the brightness that the human eye can see.