“The Art of Clean Up”: El arte de ordenar 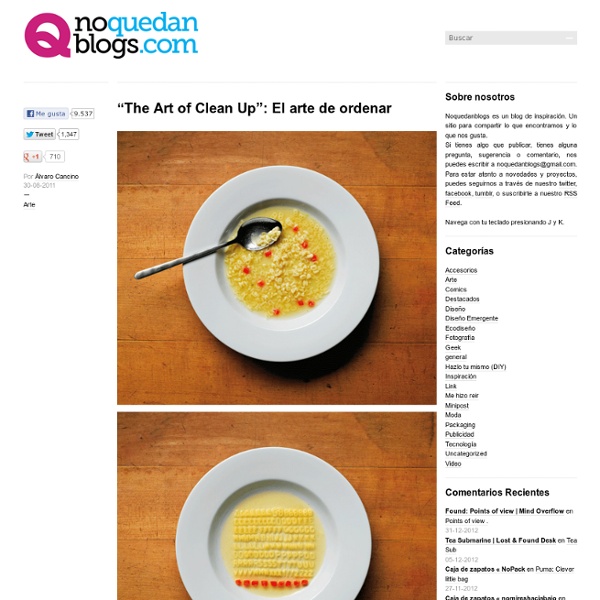 The Most Beautiful and Famous Trees on Earth “A tree is a wonderful living organism which gives shelter, food, warmth and protection to all living things. It even gives shade to those who wield an axe to cut it down” – Buddha. There are probably hundreds of majestic and magnificent trees in the world – of these, some are particularly special: Lone Cypress in Monterey The Lone Cypress Tree near Monterey is probably the most famous point along the 17-Mile Drive, a scenic road through Pacific Grove and Pebble Beach. Ashdown Forest, West Sussex, England Photos Look Like Drawings Representations is a series of photos by artist Cynthia Greig. That’s right, those are photos. I know you’re thinking “But they look like drawings!” and you’re right, they do. But they’re not. They’re photos.

Photos Taken at the Right Time From the Right Angle Photos Taken at the Right Time! Since our inspirational posts have probably succeeded in frequently bringing a curve in your face, we are sharing another collection of tasty photos. The special thing about these photos is that the photographers were at the right place at the right time and they shot it from the right angle. This is an inspirational post and it will guide you that how to make a shot, not just take a shot.

Modern Pyramid House by Juan Carlos Ramos We've seen our fair share of unique modern home designs like the box-shaped metallic house or the abstract fortress made of concrete, but Mexican architect Juan Carlos Ramos has taken on a form less-visited for his aptly titled project Pyramid House—a conceptual pyramid-shaped home created and submitted as a proposal for a recent architecture competition. The simple geometric shape creates a clean aesthetic, while remaining extremely eye-catching due to its iconic though rarely applied form. Some highlights of this design are the multiple windows cut out of the four large triangular facades that allow natural light into the home. An enormous window covers one entire side of the structure that visually exposes and lightens the design.

Photographer Puts His Baby To Work Unlike us aging folks, babies don’t have to work so hard at being cute. All that gitchy, goo, goodness comes naturally to them. Chubby thighs and toothless grins just don’t slide once you leave babyhood behind. So you might as well get them into an actual line of work early. High Speed Liquid and Bubble Photographs by Heinz Maier It never ceases to amaze me: just when I think I’ve seen every possible permutation of an artform or technique—be it figurative sculpture, stop motion animation, or in this case, high speed photography—somebody comes along and manages to do something radically different. German photographer Heinz Maier says that he began taking photographs less than a year ago in late 2010. He claims to not know what direction he’s heading in just yet, right now he’s experimenting with macro photography, mostly insects, animals, and these delicate high speed water droplets. Personally, I think he’s found a great direction. There are so many things happening here to make these photographs simply outstanding: the lighting, the colors, the occasional use of symmetry in the reflection of water, let alone the skill of knowing how to use the camera itself.

Ethereal Macro Photos of Snowflakes in the Moments Before They Disappear Russian photographer Andrew Osokin is a master of winter macro photography. His photo collection is chock full of gorgeous super-close-up photographs of insects, flowers, snow, and frost. Among his most impressive shots are photographs of individual snowflakes that have fallen upon the ground and are in the process of melting away. The shots are so detailed and so perfectly framed that you might suspect them of being computer-generated fabrications. They’re not though. No Photoshopped: Jee Young Lee Creates Surreal Dreamscapes in Her Small Studio Korean artist Jee Young Lee has been weaving herself into exceedingly clever dream worlds she creates in her studio… and despite their other worldly appearance she uses absolutely no photo manipulation for the end result. In each image you can find Lee’s young figure hidden among the vibrant details of her carefully constructed, set-like pieces – perhaps a hand poking up from the center of a watery vortex of swirling fans, or her body floating in a lotus as in the picture above (inspired by the Story of Shim Cheong, a Korea folktale as well as by Shakespeare’s Ophelia). See Also Child’s Caves: Re-Imagining The Fantasies of Childhood Lee’s small studio is hardly a hinderance for her creativity.

Disappointed Virginity - The Photography and Films of Marc Blackie 15th April 2014 – Our Diabolical Concerns – Teaser Trailer A new trailer for my next short film “Our Diabolical Concerns”, featuring Tindra Frost can be viewed below. Sorry if that sounds as though I am stating the obvious, but I’m trying to be as clear as possible. The film is not planned to be available to view online in the near future. WYH Radio Interview March 2014 I’ve recently been interviewed by Without Your Head horror radio and the entire show (including 80+ minutes of myself discussing my work) is available to listen to online now, over at the WYH Podcast Page

10 mind-boggling high-speed camera GIFs Some of the most interesting things you’ll ever see are happening far too fast for you to properly appreciate. Slowing down even the simplest occurrence can reveal incredible complexity. With modern high-speed photography we can get a glimpse of such things. So here are 10 things that happen very fast slowed down for closer observation in GIF form. Click the gallery to see each one of the pics and then check out the full explanations of each animations below, without your browser being weighed down by all those hefty GIFs! Gelatin bounce Post-apocalyptic Tokyo scenery 19 Aug 2010 The illustrations of TokyoGenso (a.k.a. Tokyo Fantasy) depict a post-apocalyptic Tokyo devoid of people and overtaken by nature.

Awesome Photographs of Italy www.incrediblesnaps.com is coming up with awesome photographs of Italy. Italy is located in Southern Europe. Italy is one of the most developed country and the citizens enjoy very high standard lifestyle. 10 incredible microscopic GIFs Every day, life is going about its business, but we can only see a fraction of the organisms around us with the naked eye. Bacteria, protists, and tiny multicellular creatures live in a world that is completely alien to us and only visible through the microscope. Thanks to the wonder of science, we can dive into this world and see how these wee beasties get along. Here are 10 of the coolest in GIF form. Click the gallery to see each one of the pics and then check out the full explanations of each animations below, without your browser being weighed down by all those hefty GIFs! White blood cell chases a bacterium