The Fox Is Black & Bach's Cantata 147, 'Jesu, Joy of Man's Desiring' Played On a Giant Wooden Xylophone In a Forest 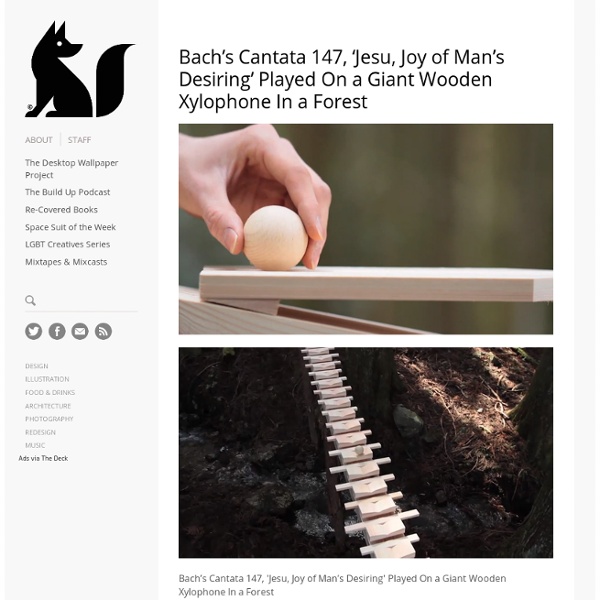 This is probably the largest, least creative title for a post ever, but it’s also one of the most descriptive as well. The video is a commercial by DOCOMO for the Touch Wood SH-08C, a limited edition phone of which there are only 15,000 being made. But honestly I could care less about the phone, this commercial is a thousand times more cool. By combining lord knows how many pieces of wood, they were able to make a long, downhill track that was able to reproduce Bach’s Cantata 147, Jesu, Joy of Man’s Desiring. This is a pretty phenomenal achievement and a beautiful piece of art. Huge props to Invisible Designs Lab’s Kenjiro Matsuo for making this crazy idea reality.

Music Quizzes, Games and Worksheets Music Quizzes, Games, Worksheets and Music Theory by Ms. Garrett Scroll down the page to play elementary and middle school level quizzes, puzzles and games about music notes, rhythms, instruments, composers, and more. PLEASE NOTE: I have already updated 60 of the quizzes below, along with the rest of my site. Eye Candy: Mesmerizing Swinging Balls Video Not mine -- mine are hypnotizing. This is a video of one of those swinging ball desk toys (aka Newton's Cradle) but with different length droopers (mine drag on the floor), creating all sorts of crazy-ass designs. I just watched it twice back to back (the second time with my eyes unfocused) and I'm pretty sure I spotted the secret to the universe at one point. SPOILER: It was a pop-up porn ad.

MixedMedia « lindenlangdon.com lindenlangdon.com The Advanced Diploma year at TAFE enabled me to further experiment with glazes using local materials and a variation in firing methods between electric, gas and wood fired kilns. As part of my submission I created a a short video “piecing together fragments”. Virtual Piano Chord Finder Join Our Facebook Group... "Your entire site is simply fantastic. I really loved it. Now I am learning the basics of piano by myself, with your really great help. Thank you very much!" How to Make a Baby We made this video using a technique called "pixilation", which is a fancy term for stop-motion animation done with real people instead of puppets. We shot it, frame by frame, with Raquel's Canon DSLR over a period of nine months. Those of you who stopped by our house might have noticed some mysterious tape marks on the floor in the living room. Those were for the camera tripod and our feet. Animating over such a long period of time, using an increasingly pregnant woman as one of your puppets, means basically throwing out everything you might normally do in an animated film. For example, early on, we had this idea that we should wear the same clothes every time, for continuity's sake.

The Greatest List of The Coolest Ice Cubes around Some of my favorite things are so simple, like ice cube shapes for example. Here’s a list of some of my favorite Ice Cube Trays and related inventions, not including the previously featured Global Warming Ice Cubes! If you like stuff like this join us on facebook or follow us on twitter to find more cool things and automatically enter to win awesome stuff on One More Gadget.

7 Lessons From 7 Great Minds Have you ever wished you could go back in time and have a conversation with one of the greatest minds in history? Well, you can’t sorry, they’re dead. Unless of course you’re clairaudient, be my guest. But for the rest of us, we can still refer to the words they left behind. Even though these great teachers have passed on, their words still live, and in them their wisdom. I’ve made a list of seven what I believe are some of the greatest teachings by the world’s greatest minds.