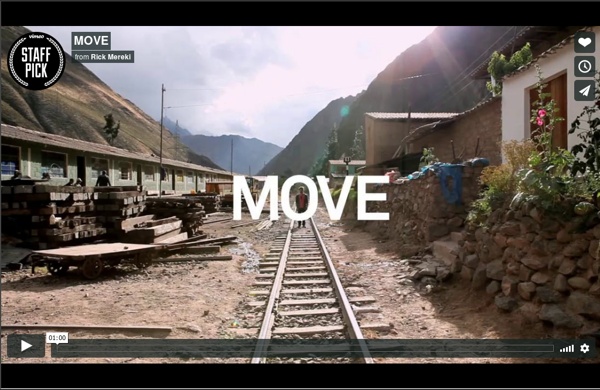 This Homemade Portal Video Is Pretty Darn Amazing If you’ve enjoyed the game Portal in the past, you understand the allure of being able to open wormholes in space. Filmmaker Jason Craft decided he wanted to recreate that experience with his goofy friends so he created a CG movie that is on par with anything you can see at the theatre these days. His short, Portal: Terminal Velocity, shows us what would happen if a bunch of dudes had a gun that could instantly transport you through space and time. The video is pretty amazing and even more amazing is their “working” portal gun. Sadly, it too isn’t real: For those of you that think the gun is a physical prop you can buy, well…..sorry to break the news to you, but it’s entirely CG.

Top 10 Short Films Available Online Short films rarely get major releases these days, so it’s no surprise that even serious movie fans often neglect them. But with the rise of websites like YouTube, shorts have finally found a viable exhibition platform. The following are ten of the most famous short films available online. » Get Off Your Butt: 16 Ways to Get Motivated When You’re in a Slump By Leo Babauta Even the most motivated of us — you, me, Tony Robbins — can feel unmotivated at times. In fact, sometimes we get into such a slump that even thinking about making positive changes seems too difficult. But it’s not hopeless: with some small steps, baby ones in fact, you can get started down the road to positive change. About the Festival on Vimeo June 8th + 9th, Vimeo HQ + ROOT The Vimeo Festival was two days of riveting conversations, inspiring workshops, scintillating screenings, and one truly outstanding closing party. What happened this year Conversations We opened up dialogues, lobbed provocative questions, and gave creators a forum in which to discuss stuff they care about. Workshops People of all skill levels participated in educational workshops with the industry’s leading creators. Screenings We projected our favorite submissions and unveiled some exclusive premieres.

Fake video windows - best thing I've seen today // Current To Our Faithful Current.com Users: Current's run has ended after eight exciting years on air and online. The Current TV staff has appreciated your interest, support, participation and unflagging loyalty over the years. Your contributions helped make Current.com a vibrant place for discussing thousands of interesting stories, and your continued viewership motivated us to keep innovating and find new ways to reflect the voice of the people.

Rarely known YouTube features YouTube Slam: It is an experiment that was introduced by the Google Research team as a new way of video discovery, in order to find out the next viral sensation among user-generated videos. Every day, the Google team puts up two videos head to head in each category – like Comedy, Cute, Music, Bizarre and Dance – and users get to vote for their choice. They also get bonus points if the video chosen by them wins the round. Users can then also compete to earn a place in the leaderboards in this fun and simple game of voting.

Corning Concept Video: Please Use More Glass Touchscreens! Please! By now, you probably know the story. Steve Jobs hated the plastic screen on an iPhone prototype. He demanded that it be glass. And that eventually led him to Corning, who made an amazing glass in the 1960s, called Gorilla Glass, which hadn’t found any commercial applications.