Too beautiful to be real? 16 surreal landscapes found on Earth 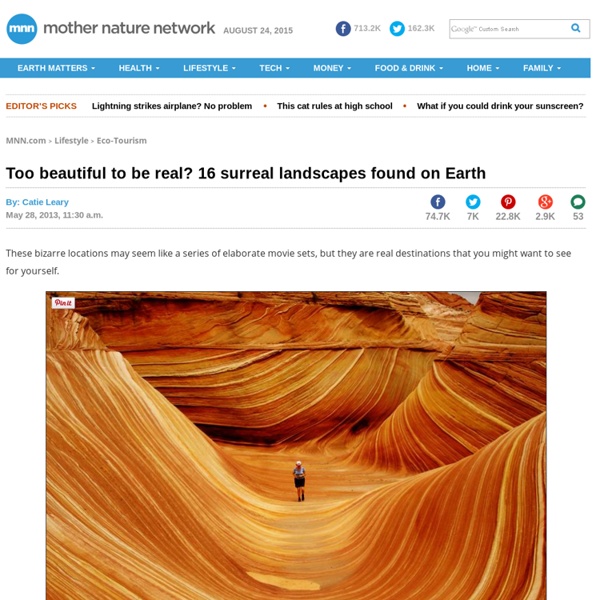 20 Animated Gifs that Explain How Things Work If a picture is worth a thousand words, then an animated gif must be priceless! Below you will find a collection of simple and elegant animations that explain how various things work. From geometry to mechanics and everything in between, these animations help educate and explain how the world around us functions. Deadly lake turns animals into statues (Images: Nick Brandt) ACCORDING to Dante, the Styx is not just a river but a vast, deathly swamp filling the entire fifth circle of hell. Perhaps the staff of New Scientist will see it when our time comes but, until then, Lake Natron in northern Tanzania does a pretty good job of illustrating Dante's vision.

Places That Are Actually Real But Don't Look So These places look so unreal, but they are real! Maybe some of you were on one of these beautiful place, and if one of you did, you are than really happy person who live on this planet! Just look how this photos are cool and so sweet. Creative Ways to Repurpose & Reuse Old Stuff Clever and creative ways to repurpose and transform ordinary objects into useful stuff… Bottles Into Pendant Lamps | Via Wine Bottles Into Chandelier | Via Drum Kit Into Chandelier Designer: ludwigmetals | Via: JJ’sRedHots Credit Cards Into Guitar Picks | Via Credit Cards Into Guitar PicksLightbulbs Into Oil Lamps | Sergio Silva Physics Simulation Game [POWDER] : Standard powder.[WATER] : Water splash.[FIRE] : Fire spark. Cheval des Andes Polo Match in Argentina On March 6, a group of Argentina's upper crust, South American influencers from across the continent, French wine darlings, and international social elite met at Barreal's La Pampa del Leoncito, in the San Juan province for a day of polo and food. Cheval des Andes, a Bordeaux-style fusion wine of French Premier Grand Cru Cheval Blanc and Mendoza's Terrazas de los Andes, officially hosted the match. But an illustrious cast of players, an aesthetically perfect setting, and some unforgettable asado (that's barbecue) stole the show. A total of 25 4x4 vehicles transported guests four hours into the mountains via one bumpy dirt road. Turn left and you were doomed to a life lost somewhere in Chile. Continue north and you would reach the Argentine oasis of Barreal.

45 Perfectly Timed Photographs That Will Leave You Stunned Chance, position, timing, angles, lighting, and being in the right place at exactly the right moment make these photographs some of the most intriguing and mind-bending pictures of all-time. Explore the perfect timing of capturing lightning strikes on skyscrapers. The perfect timing of snapping a friend’s picture just as a bicycle crashes into a pole. See the perfect angles and timing as Buddha snatches an airplane from the sky and a crane snatches the Eiffel Tower from the ground. Explore the unbelievable moment of a Praying Mantis riding his organic bicycle. Laugh at the uncanny shot of an official being Crowned by the King of Beers at mid-court of a San Antonio Kings basketball game.

Remember Me Concept Art by Paul Chadeisson Concept artist Paul Chadeisson has released concept artwork he created for Remember Me(previously known as Adrift), a video game developed by Dontnod Entertainment. Paul collaborated with fellow concept artist Aleksi Briclot and Michel Koch to create the world of Neo-Paris 2084. Make sure to click on images to enlarge. Link: paul.chadeisson.fr All images used with permission by the artist. © Capcom. All rights reserved. This Baby Has No Idea His Parents Are The Coolest Ever. But These Photos Are Proof. DECEMBER 24, 2013 — By Sara Heddleston Sara Heddleston Sara has been working and writing online for so many years, she's unsure if she is still in corporeal form. She considers herself a jack of all trades, but would prefer it if you would stop calling her "Jack."

20 Optical Illusions That Might Break Your Mind [W/PICTURES] (TruthSeekerDaily) Viewer discretion advised! Do not scroll down unless your brain is made of steel and your nerves are made of teflon! Enjoy: The Warped Chair by Ibride The Land of Tulips Tulip fields, wind turbines and canal, Holland. Photo by: Anna Paulowna There are reportedly 3,000 varieties of tulips. 20 of The World's Most Powerful Photographs Viewing 1 of 20 Starving boy and missionary Viewing 2 of 20 Inside an Auschwitz gas chamber A Forest Of Symbols: Life Of Pi and Chaos Why is this film so good? To receive 11 nominations from the Academy Awards, including Best Director and Best Picture, is no small feat, and it won 4 awards, more than any other film this year (Best Director, Cinematography, Visual Effects and Original Score). How can a film receive so much praise, even elevating it to the level of "the miraculous?" For two reasons: first, it teaches us that miracles do exist; secondly, it teaches us the power of art.