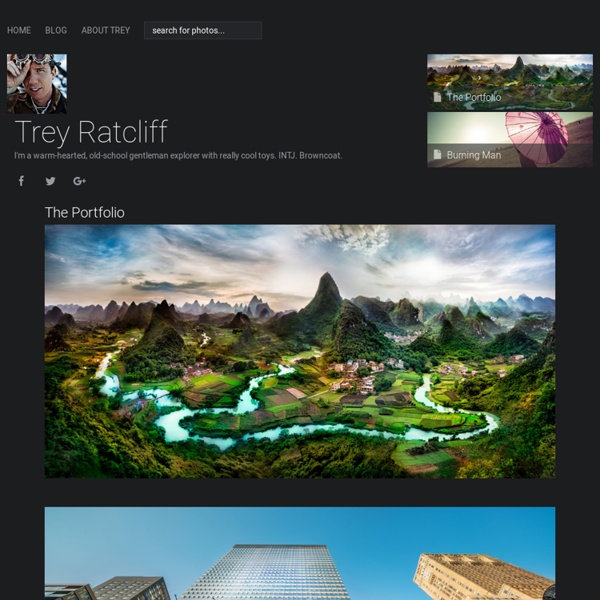 42 Stunning Photographs Of The Human Race July 16, 2014 | 0 Comments | Topics: Photography A child of the Arbore tribe, Ethiopia A Chimbu tribesman preparing for a celebration of death. Mount Hagen, Papua New Guinea In the Amazon the Ashaninka Indians apply face-paint, made from seeds of the Urucum plant, each day in a design that reflects their mood A young Nenet boy in Siberia plays in -30 degrees 15 Amazing Castles from Around the Globe Although designed and built for the prominent purpose of defense, today the castles seem like somewhat unrealistic constructions straight from the fairytale world. From solid strongholds to oriental fortresses and highly decorative palaces, the castles are our connection to the past, where legends mix with history and reality blends with a fairyland. This fairytale castle is the historical seat of the Prussian Kings and German Emperors.

Yves Marchand & Romain Meffre Photography - The Ruins of Detroit At the end of the XIXth Century, mankind was about to fulfill an old dream. The idea of a fast and autonomous means of displacement was slowly becoming a reality for engineers all over the world. Thanks to its ideal location on the Great Lakes Basin, the city of Detroit was about to generate its own industrial revolution. Visionary engineers and entrepreneurs flocked to its borders. In 1913, up-and-coming car manufacturer Henry Ford perfected the first large-scale assembly line. Within few years, Detroit was about to become the world capital of automobile and the cradle of modern mass-production.

The Jaw-Dropping Photography of Storm Chaser Mike Hollingshead You might not come out on top if you weigh the pros and cons of storm chasing, but there are definitely pros beyond feeling like a bada** and a deep fulfillment of your twin passions for meteorology and spiking your adrenaline. If you want proof of that, just check out the awe-inspiring photography of storm chaser Mike Hollingshead. If the name Mike Hollingshead sounds familiar, that’s good, it means you’ve been reading PetaPixel for a little while. He’s actually contributed a few posts for us over the years, and his photo of a storm over Nebraska from 2004 was famously used in a fake photo of Hurricane Sandy approaching New York that went viral and further taught us not to believe everything that comes across our news feed. But if that’s the only photo from his storm chasing portfolio that you’ve come across, then you’re in for a real treat. Hollingshead began storm chasing after his first real chase put him right in the path of a tornado in Iowa.

Timelapse Video Shot During Meteor Shower in California Talented filmmaker Henry Jun Wah has created this stunning timelapse video shot in Joshua Tree National Park and the Ancient Bristlecone Pine Forest during the Perseid meteor shower in August. The three-minute film called Ascendance features ancient trees, lightning, rainbows, meteors, the Milky Way, and lots of stars. Make sure you hit fullscreen, then watch and feel awestruck. The music playing is Fields of Honor by Justin R. Durban. You can find more about Henry and the project on his website and Facebook page.

Sunken Bridge Allows Pedestrians to Walk Below Water RO-AD Architects have designed the Moses Bridge, a bridge that visually parts water and gives pedestrians the unique experience of walking below the water to access Fort de Roovere, a 17th century defence structure located in the Netherlands. From a distance the Moses Bridge is nearly invisible, but becomes visible as one approaches. The bridge was built form Accoya wood, which underwent a nontoxic modification process to prevent fungal decay and increase its durability. Share With Your Friends

The Top 75 ‘Pictures of the Day’ for 2012 *Update: The Top 100 ‘Pictures of the Day’ for 2012 have just been published. Click here to check out the most up-to-date post! After the positive reception from last year’s “Top 50 ‘Pictures of the Day’ for 2011“, the Sifter promised to highlight the top 25 ‘Pictures of the Day‘ at the end of every quarter, eventually culminating in an epic Top 100 for 2012. Booboo And His Friends Are The Most Adorable Guinea Pigs On The Internet Meet Booboo, an adorable guinea pig that is the muse of a photographer who goes by the nickname “Lieveheerbeestje.” Her photos of little Booboo and her friends look like professional fashion shots for Guinea Pig Vogue magazine: they wear hipster glasses, bathe in pink tubs, pose with cute fluffy rabbit ears, nom nom on some daisies and wear ribbons in their hair. Guinea pigs, neither Pigs nor Guinean, are friendly pets that can be as small as a rat or as big as a small dog. Booboo weighs about 1kg and is about 2 years old. Her favorite food is chicory and carrots and she loves to spend her days eating, sleeping and posing for the camera. When asked how she manages to capture Booboo and her other guinea pigs sitting so still, the photographer explained, on her Deviantart profile, that her animals are very calm: “they just don’t move a lot in front of the camera, I guess I am lucky with that!”