Animals Illuminated by the Sun 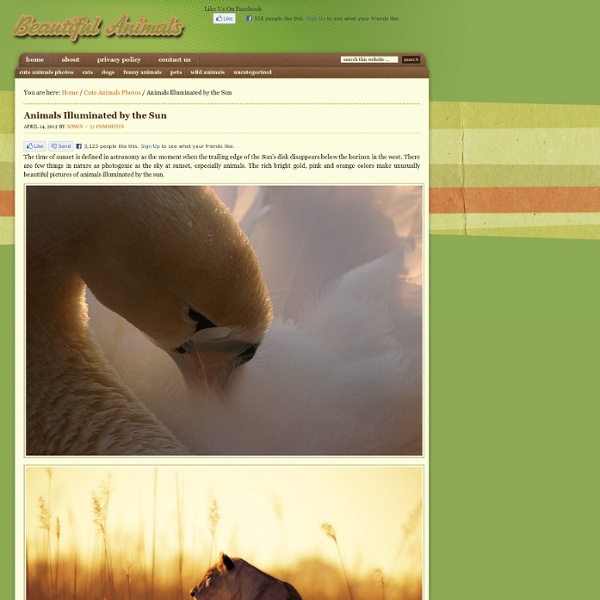 recreating children's drawing by yeondoo jung jul 15, 2008 recreating children's drawing by yeondoo jung ‘the magician turned the wale into a flower’, 2004 the artwork of children is fascinating on many levels. however their uninhibited imagination is not always very true to reality. so when korean artist yeondoo jung set out to turn the drawing’s of 5-7 year old children into reality, some interesting environments were sure to arise. after he collected over 1,000 drawings, a select few were selected and turned into reality through a series of photo shoots titled ‘wonderland’. the results are just as fascinating as the original drawings.

25 Most Beautiful Animals Photography on StumbleUpon I think the most beautiful pictures are those made in nature. Nothing compares with the expression of a tiger, the majestic flight of an eagle or the strength of a white bear. Below you can see 25 the most beautiful animal photographs that will capture your attention, and were stumbled on StumbleUpon. Melissani Undercover Cave and Lake One of the Ionian islands in Greece, Kefalonia is definitely the greenest and greatest. There’s great quantity of gorgeous nature and breathtaking landscape there. Vacationers and travelers who arrive here are fascinated by the magnificent rugged mountain ranges and also the valleys in between them which are full of number of vineyards. Just one of Kefalonia’s many well known sightseeing and tours points of interest that travelers can enjoy during their vacation is Melissani Lake.

A Trick Of The Light Highlighted In Starry Night While an onlooker from outer space might be a bit confused to see planet Earth exploding with energy, we’re just smitten about it. In an effort to expose both familiar and unfamiliar environments, photographer Lee Eunyeol transforms natural landscapes with color and light in the dead of night. In Starry Night, Eunyeol intricately plants hundreds of lights into unlikely places, illuminating the surrounding area and personifying the core of our Earth. You might be surprised to see the incredible transformation of places you thought you knew. If you’re in Korea, check out the photographs in person on view at the Gana Art Space in Seoul. Animals in funny situations Not everyone owns a pet, or has the chance to come across any animal daily for that matter, so it’s refreshing to see some of them captured in funny and interesting situations. Funny situations are around us in everyday life. All we need to do is to spot it. These photos will not leave anyone indifferent, animals can be so funny .

Anka Zhuravleva Moscow raised and StPete based awesome artist and photographer Anka Zhuravleva invites you to be mesmerized by her latest photo-artwork series “Distorted Gravity”. Anka-Zhuravleva.com Built to kill - 40 breathtaking closeup photographs of animals Built to kill – 40 breathtaking closeup photographs of animals Posted by Richie on Wednesday, June 2, 2010 · 93 Comments Wildlife photography is regarded as being one of the most challenging forms of photography. It involves a thorough understanding of the behavior of animals and in addition to it, one needs to have sound technical skills, such as being able to expose in the right manner.

25 Incredibly Detailed Black And White Portraits of the Homeless by Lee Jeffries Lee Jeffries career began as a sports photographer, capturing the beautiful game of football in Manchester. Then a chance meeting with a homeless woman living in the streets of London changed his life forever. He has since dedicated himself to capturing gripping portraits of the disenfranchised. Shooting exclusively in black and white, Lee Jeffries’ 135+ pictures can be viewed in his Flickr Photostream. The majority are closeup portraits with incredible detail. Each photograph exudes so much raw character and depth, you find yourself studying each shot with great intensity. 35 Amazing and Colourful Photographs of Dragonflies The following two tabs change content below. I'm Rob, the editor of Light Stalking. I try to keep this ship on course. A quick trip into the back garden often throws up a slew of photographic opportunities. For people who are lucky enough to have a few dragonflies around, the colourful creatures are a great subject.