Castles - Medieval and Pictures of 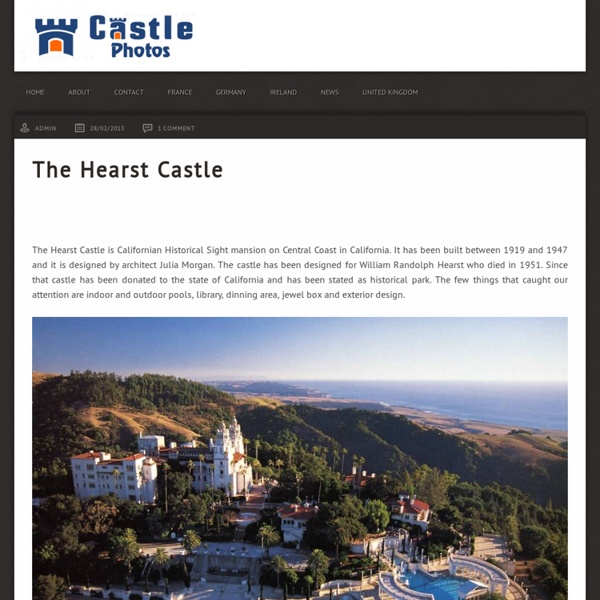 The Hearst Castle is Californian Historical Sight mansion on Central Coast in California. It has been built between 1919 and 1947 and it is designed by architect Julia Morgan. The castle has been designed for William Randolph Hearst who died in 1951. Since that castle has been donated to the state of California and has been stated as historical park. The Indoor Pool The Library The Outdoor Pool The Dining Area The Isabella Jewel Box

Architecture Imagine the renovation dilemmas. A huge penthouse of a converted 1930s office building in TriBeCa, New York, is to be turned into a functioning home for a family with three teenagers. In fact, we can not quite imagine the issues that faced Steven Harris Architects when the family showed up, literally, at the doorstep of the celebrated architect and asked if he’d like to work on their home. Harris said yes and proceeded to make his magic. The scale of the apartment is huge and the freedom from budget constraints allowed for some spectacular solutions. Harris’s work is often distinguished by clarity and light, by the use of glass, by the maximization of views and, above all, bold solutions. What emerged as a result of the TriBeCa Penthouse project, is a multi-level (27th and 28th floors) nearly 8,000 square-foot (743 square meter) family-friendly residence that includes self-contained guest quarters and a new glass-and-teak-beam rooftop pavilion that functions as a recreation room.

Travel News, Tourist Attractions and Vacation Spots Transportation We are wondering why it is that car manufacturers are tripping over each other inventing boring and redundant “super modern” and “high design” cars, when the end result is a sea of lookalikes. One can no longer recognize a “premium” make from a lower-end car, certainly not by distinctive and recognizable design features. They are unimaginative, uninspiring and suffer from a serious case of follow-itis. As opposed to being leaders and, in particular, design leaders. We see design tweaks and add-on features advertised as if they were a revolution when in fact, there’s nothing really significantly new or exciting. No wonder so many are giving up cars altogether. Our hopes are up a bit with a sighting of the carbon fiber-bodied “Bella Figura” Bugnotti. We are all for going back to the basics, to looking at the best and most beautiful models of the past and resurrecting them. Imagine if we could again drive cars this cool?

Gardening Tips - 7 Habits of Successful Gardeners Originally published January 2009 Or is it the Seven Pillars of Horticultural Wisdom? As everyone's resolutions remind us, we love attaching a number to advice, a number smaller than the one I regard as most realistic: The Twenty Three Thousand Four Hundred and Sixty-Two Things It's Important to Remember Before Getting Out of Bed. So be warned: I haven't really honed it down to only seven; these are just the first seven essentials that came to mind when I decided to do this. And not in order, either. Make CompostUse CompostPlant Crops in Wide BedsMulchFeed the Soil, Not the PlantsShare SomethingBe There Photo: The compost bins at Stonecrop Gardens in Cold Spring, N.Y. 1. Short version: Mother Nature never throws anything away. Longer version: Composting is the rare silk purse from sow's ear, something for nothing, win-win. It's easy to fall into thinking that compost's last name is bin, and that careful layering and turning are part of the deal. 2. 3. 4. 5. 6. Got seeds? 7.

This week on gdgt: LG shows there's room for more than one mega-smartphone Each week, our friends at gdgt go through the latest gadgets and score them to help you decide which ones to buy. Here are some of their latest picks -- along with a few you should probably avoid. Want more? Visit gdgt anytime to catch up on the latest, and subscribe to gdgt's newsletter to get a weekly roundup in your inbox. LG Optimus G Pro 5.5 Samsung's Galaxy Note II may dominate the "phablet" market, but that doesn't mean it's the only option if you want a giant smartphone. Fuji FinePix X20 Fuji's X20 is a slightly updated version of the X10 camera, featuring a new sensor and an updated optical viewfinder intended to give you more information -- like exposure data -- when framing your shots. Pure Jongo S340B Small, portable and colorful, the Jongo S340B is a WiFi-enabled speaker that provides 360 degrees of sound, but doesn't do enough to stand out among the competition. Drobo 5D Featured gdgt discussion

This Awesome Urn Will Turn You into a Tree After You Die | Design for Good You don't find many designers working in the funeral business thinking about more creative ways for you to leave this world (and maybe they should be). However, the product designer Gerard Moline has combined the romantic notion of life after death with an eco solution to the dirty business of the actual, you know, transition. His Bios Urn is a biodegradable urn made from coconut shell, compacted peat and cellulose and inside it contains the seed of a tree. I, personally, would much rather leave behind a tree than a tombstone. Related Content If You Liked the 'Bios Urn,' You'll Love 'The Spirit Tree' Daniel Honan Managing Editor, Big Think