The Deepest Pool in the World 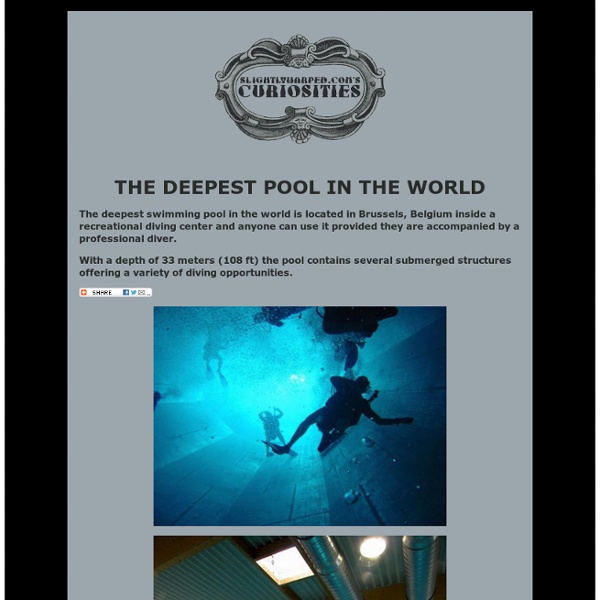 The deepest swimming pool in the world is located in Brussels, Belgium inside a recreational diving center and anyone can use it provided they are accompanied by a professional diver. With a depth of 33 meters (108 ft) the pool contains several submerged structures offering a variety of diving opportunities.

The Bread Code Tells You When a Loaf Was Baked Ever wonder what the colors of the tie tags on loaves of bread represent? They're a code designating the day of the week on which a loaf was baked: * Blue: Monday * Green: Tuesday * Red: Thursday * White: Friday * Yellow: Saturday[...]An easy way to remember it, though, is to simply recall the alphabet. The colors run in alphabetical order, so the earlier they appear in the alphabet, the earlier in the week the bread was baked. And it’s true. Link via First Things | Image: Paul Michael A Singular Creation Art Community • Tutorial: Painting Realistic Eyes We would like to ing you this feature tutorial by Linda Bergkvist, renowned in the digital arts community for her gorgeous portrayal of characters. In this tutorial, Linda shows us step by step how she paints realistic eyes. About Linda Bergkvist Linda Bergkvist is a renowned digital artist who currently lives in Sweden. Linda Bergkvist's website can be found at www.furiae.com.

The Manny Librodo Technique | Tech Tips & Tricks Posted by blogmeister on May 13, 2010 This is a pretty famous technique for photographers that many are applying to their post processing needs. It is a pretty useful technique to focus on the sharpness especially on a subject’s skin. I found this set of instructions from a photographer’s forum posted by member talan. You can save it as an action set. Below is a before and after. Norman the Briard's new take on shaggy dog stories as he takes his scooter for a spin By Daily Mail Reporter Updated: 05:39 GMT, 10 March 2011 As shaggy dog stories go, the one about Norman the very bright Briard who is a wizz riding his scooter ranks high on the list. The clever canine, who lives with the Cobb family in Canton, Georgia, competes in many obedience competitions and received his Companion Dog Title at just 15 months of age after four first place finishes. Scroll down for video Norman gets his foot up on the scooter and prepares himself for the off But it's his razor scooter that has remained the pooch's passion since he was a mere pup when his owner, Karen Cobb, took him out for his first spin. 'He began playing with the kid's scooter in the backyard and we thought it would be fun to give him a ride on it,' says Karen. His scooting antics have already made him popular on the Internet, and his Facebook page has quite a following. Let's get this show on the road: Norman puts his back into it

The Most Frightening Bridge Ever Storseisundet Bridge (Norwegian: Storseisundetbrua) is the longest of the eight bridges that make up the Atlanterhavsveien (“The Atlantic Road”), the road connection from the mainland Romsdal peninsula to the island of Averøya in Møre og Romsdal county, Norway. It is a bridge on one of Norway’s most scenic and popular tourist roads – the Atlantic Ocean Road (Atlanterhavsveien in Norwegian). The bridge named Storseisundet makes a sharp bend as it jumps over a number of small islands and waterways. The approach to the bridge looks scary as the bridge seems to end abruptly and as if any attempt to proceed would result into the vehicle flying out and dropping into the waters below. Storseisundet Bridge is a cantilever bridge that is 260 metres (850 ft) long and with a maximum clearance to the sea of 23 metres (75 ft). It was opened on 7 July 1989, and it was a toll road until June 1999. 1. Ads by Google

Learn Essential Camera Skills [Tutorial] Start taking amazing photos in only 3 hours (Even if you’re a complete beginner) “This is a resource I wish I had had when I first got my camera. Everything you need to know is here in such a fun way, it feels effortless, and takes the fear out of learning to shoot in manual. It’s a must for any beginner who wants to bring their photography to the next level. Bravo!” Hi! This is what I hear from beginner (and not-so-beginner) photographers all the time: “I really want to take amazing, creative photos. And I get it. But here’s the thing: The problem isn’t WHAT you’re learning, but HOW you’re learning. See, most of us learn best by seeing and doing. That’s why Extremely Essential Camera Skills gives you examples, videos, and exercises so you can really get this stuff down. This tutorial makes everything so simple, and so interactive, that you actually have fun going through it. First Learn Everything In Small, Easily Understood Pieces Add Real Layers Of Depth To Your Photos -Lauren Lim P.S.

10 More Terrifying and Mysterious Creatures Mysteries Here are ten of the most terrifying and bizarre creatures to ever, allegedly, have walked the Earth. These creatures defy logic, inspire the imagination and generate fear. They are the subject of numerous movies, documentaries, books and even songs. This creature was sighted on three separate occasions in the town of Dover, Massachusetts, on April 21 and April 22, 1977. This beast is said to have inhabited the Pine Barrens of Southern New Jersey, with tales beginning in the 1800s and continuing until the 20th century. It is claimed that the Flatwoods Monster is some form of extraterrestrial, as this creature was spotted in the vicinity of a large UFO that either hovered above or rested on the ground in the town of Flatwoods, in Braxton County, West Virginia, on September 12, 1952. Mawnan, Cornwall – 1976. Lizard Man of Scape Ore Swamp The Lizard Man, being particularly terrifying, deserves a high place on this list.

Dalton Ghetti creates amazing art on the tips of used pencils Most of us will agree with the age-old saying that “patience is a virtue.” How many of you, however, would actually hang on for two years and a half to bring a piece of art into existence? Dalton Ghetti, 49, a Bridgeport artist, has spent 25 good years working with a razor blade, a sewing needle and a sculpting knife for carving his unique art on the graphite of pencil. The artist says: I don’t make money from it but I would love a gallery owner in England to fly me over and put on a show. The inclination to fashion something new did not surface all of a sudden.

Quick Tips to Learn How to Use a Digital SLR Camera If you’re the typical digital photographer, you have to wonder if there is a faster way to learn how to use your camera. The owner’s manual is written by a technical writer often not a practicing photographer. Photo captured by gianmario (Click Image to Find Photographer) Follow these step-by-step, using your manual as a guide and you should be taking pictures in no time. Take some pictures on automatic, program, aperture or shutter priorityDownload the images onto your computerFormat the cardChange the ISOChange the Shutter speed and ApertureChange the White BalanceChange the Compression or QualityChoose which Autofocus Sensor in your viewfinder to use. Once you’ve mastered those 8, learn how to do these next: 1. 2. “into the light” captured by Gerry Morgan (Click Image to Find Photographer) 3. 4. 5. 6. “Seagulls” captured by Xzavier Blackmone (Click Image to See More From Xzavier Blackmone) 7. 8. 9. For Further Training: It can be found here: Extremely Essential Camera Skills

The Mysterious Moeraki Boulders If you go down to Koekohe beach in New Zealand you can be sure of a big surprise. In front of you, scattered like enormous marbles from some long abandoned game between giants, are hundreds of giant spherical rocks. Or are they the egg shells of sea-born dragons? The Moeraki boulders present us with a mystery – what are they and how on earth did they get there? Some are isolated but may occur in clusters. Many of the Moeraki boulders give the impression of being completely spherical – and they almost are. They do, however, tend to form early on in the history of the deposited sediment – it is thought they occur before the rest hardens in to rock. What is significant about these concretions is their size. The material responsible for their concretion is a carbonate mineral called calcite. There are large cracks on the boulders and these are known as septaria. The Moeraki boulders date from the Paleocene epoch which translates as the early recent.

Recipe and picture for Chamorro stuffing or riyenu with potatoes, olives, relish, celery, pimentos and more. COLLEEN'S CHAMORRO STUFFING or RIYENU This recipe is from my sister-in-law, Colleen Borreta Garrido. It is her grandmother’s recipe, Trinidad Borreta. How to make riyenu video coming soon Set 1 ½ lb. ground beef, browned and thoroughly drained (I strained this in a colander then gave it a quick rinse under hot water to remove a bit more of the fat) Set 2 2 ½ lbs. potatoes, cubed (6 ½ cups cubed potatoes about the size of a ½ to ¾ square-inch cubes) Set 3 4 oz. sweet relish (½ cup), drained 1 – 4 oz. jar pimentos, drained 1 – 4 ¼ oz. can chopped olives (packed ½ cup), drained 3 oz. of whole, seeded olives (half of the 6 oz. can or about 15 pieces), quartered lengthwise ¼ cup chopped celery ½ cup raisins Set 4 3 1/4 cup Pepperidge Farm Stuffing Mix (or half of the large, 14 oz. bag....this is found in the stuffing aisle not the bread crumb aisle…it’s basically course, dried bread with a hint of dry seasonings….do not use breadcrumbs for meatloaf because it is too fine) Set 5 ½ tbsp. salt Set 6 Set 7 1. 2.