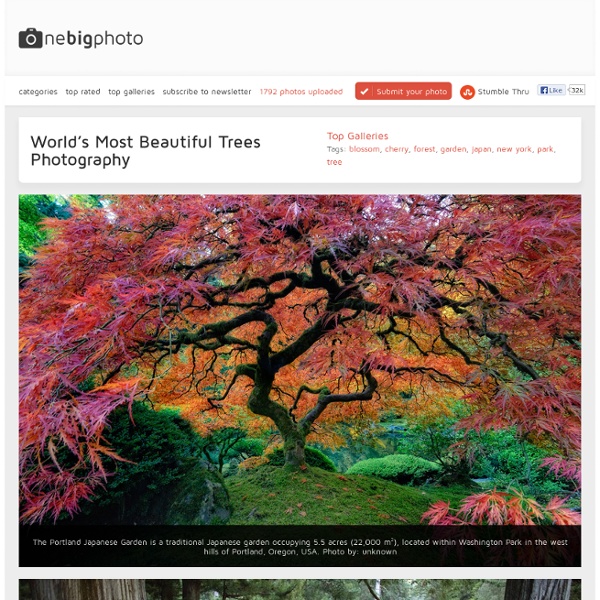 World’s Most Beautiful Trees Photography PART 2 Cherry blossom tree path, Germany. Photo by: Shoeven Fairytale tree tunnel, Ireland. Rare color photographs from the Depression Era Rare color photographs from the Depression Era Mar 20 2012 During an era where most photographs were taken in black & white, these photos show a colourful glimpse of what life was like during the Great Depression and World War II, primarily throughout America. A fascinating map of the world’s most and least racially tolerant countries Click to enlarge. Data source: World Values Survey Update: A professor who studies race and ethnic conflict responds to this map. When two Swedish economists set out to examine whether economic freedom made people any more or less racist, they knew how they would gauge economic freedom, but they needed to find a way to measure a country's level of racial tolerance.

Amazing Places To Experience Around The Globe (Part 1) Preachers Rock, Preikestolen, Norway Blue Caves - Zakynthos Island, Greece Skaftafeli - Iceland Plitvice Lakes – Croatia Crystalline Turquoise Lake, Jiuzhaigou National Park, China Four Seasons Hotel - Bora Bora 21 Most Beautiful Nature Photos On Stumbleupon These are the 21 most beautiful nature photos on Stumbleupon. Stumbleupon is big society where you can spend all your day and all you life with smile on your face. On that site you can find lots of things, like photos, animals, home stuff and many more, nature photos like these one below. These nature photos are really beautiful and very amazing and that is the proof just how much our Earth is beautiful place.

Return to the rainforest: A son's search for his Amazonian mother 28 August 2013Last updated at 20:42 ET By William Kremer BBC World Service David Good's parents come from different countries - hardly unusual in the US where he was raised. But the 25-year-old's family is far from ordinary - while his father is American, his mother is a tribeswoman living in a remote part of the Amazon. Two decades after she left, David realised he had to find her. 21 Tips For Quitting Your Job, Going Off Grid and Living The Dream Have you ever wanted to be free of the stresses of your present life? Ever considered breaking out on your own and living independently of the public utilities and other so-called modern conveniences that seem to keep you chained down? What’s keeping you from realizing your off-grid dream? Sometimes, it may be your career or misplaced notions of duty and responsibility towards society standing in your way of personal freedom. Visions of living in penury and in crooked little houses with no creature comforts may be acting as a deterrent to others. We are social animals, no doubt, but that doesn’t mean we have to live close together in congested cities and stick to specific roles like ants in a colony.

25 Incredibly Detailed Black And White Portraits of the Homeless by Lee Jeffries Lee Jeffries career began as a sports photographer, capturing the beautiful game of football in Manchester. Then a chance meeting with a homeless woman living in the streets of London changed his life forever. He has since dedicated himself to capturing gripping portraits of the disenfranchised. Shooting exclusively in black and white, Lee Jeffries’ 135+ pictures can be viewed in his Flickr Photostream. The majority are closeup portraits with incredible detail. Each photograph exudes so much raw character and depth, you find yourself studying each shot with great intensity. Most Beautiful pictures of nature around the planet! Great Atmosphere Most Beautiful pictures of nature around the planet! Great Atmosphere Our world is full of wonderful places and amazing places are discovered daily by professional or amateur photographers.

NIKOLA MIHOV Monument to the Soviet Army, BurgasForget Your Past, 2009 - 2012The project Forget Your Past traces the fate the most important communist-era monuments in Bulgaria. The title of the series is borrowed from graffiti writing over the entrance of the Bulgarian Communist Party Memorial at Mount Buzludja that poignantly illustrates the fate of the communist-era monuments in Bulgaria. Constructed at enormous expense as expressions of national pride, today most of them are looted and neglected. Government policy is wrecking science Ernst Haeckel, the great 19th-century developmental biologist and author of immensely popular science books, suggested that science had done its business and that there was little more to be discovered. A century later, the science journalist John Horgan published a book, The End of Science, making a similar point. Both men based their theses on the idea that knowledge was finite and that we’d soon know everything worth knowing. Time, of course, has proved them wrong – and Horgan, in particular, probably wrote his book only to be provocative.

The 33 Most Beautiful Abandoned Places In The World Many people doesn’t know, and didn’t even heard about these famous abandoned places. Many of these places are really something amazing, but they are also really sad when you take a closer look at them. On the folowing list, you can see abandoned planes, abandoned ships, as well as the abandoned houses, and so many other things, that are really amazing and magnificent. So, check out these amazing abandoned places photos. 1.