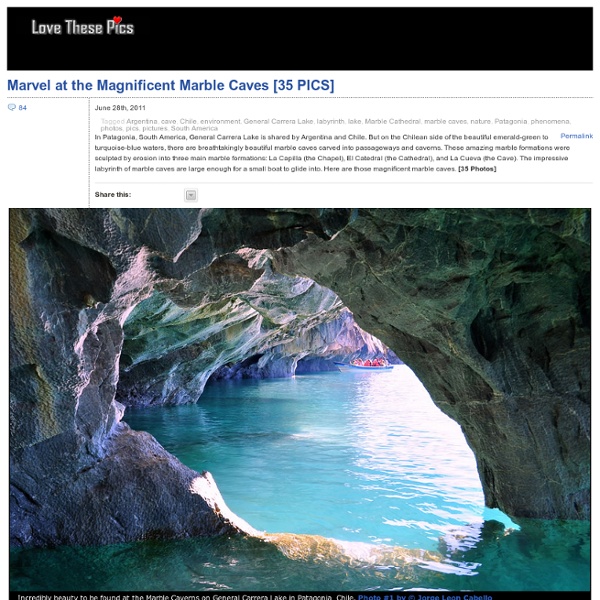 Can you imagine something happening that would endanger these exquisite azure caverns? It might if Chile continues with plans to build five hydro-power dams in Patagonia. Photo #7 by © Jorge Leon Cabello The water has eroded the marble to create cavities and marble caves. There are different color shades, depending on the contents’ impurities. There are white banks of great purity, but it is also possible to find blue and pink marble banks due to the presence of other minerals. Amazing geological formations on Chilean side of Lake Carrera. It would be a real shame if the hydro-power dams damage the lake and the marble caves on top of the surrounding natural habitats for wildlife. View of the lake and where to find the marble caverns in the Aysen region of Chile.

Beautiful Places to Visit - Part 2 The island nation known as the Seychelles can be found in the Indian Ocean off the East coast of Africa, North of Madagascar. There are 115 islands in the archipelago. Seychelles has become a popular tourist destination, thanks to its stunning tropical beaches and interesting wildlife. Popular activities include diving, fishing, sailing, and laying around on amazing white sand beaches. Visitors can find any range of accommodation on the main islands of Praslin, La Digue or Mahé, as well as a variety on outlying islands. Once a backpacker’s secret, Thailand’s Phi Phi islands exploded onto the tourist map after the release of The Beach

Tamron 18-270mm f/3.5-6.3 Di II VC PZD Aspherical Sony DSLR With 6-Year USA Warranty World's first and greatest zoom ratio of 15X, covering 28-419mm 35mm-equivalent angle of view Going back to the basic concept of "one lens covering everything from wide angle to telephoto," engineers at Tamron took up the difficult task of expanding the zoom range of Tamron's high power zoom lenses even further. Their unstinting efforts to extend the telephoto end beyond previous limits while retaining the wide-angle end at 18mm has borne fruit as an ultra high power zoom lens that is exclusively designed for DSLR cameras and boasts the greatest zoom range of 15X for the first time in the world.

Lifestyle We will never tire of the positive effects of nature. Its calming, soothing and inspiring influence will never go out of style. The more we rush, the more time we spend indoors staring at our screens and devices, the more urban our lifestyles become, the more we crave and need time away from it all. It has been amazing to follow the newest solutions to the old dilemmas: How to bring more green space to cities; how to reclaim underused urban land for recreational and other "green" uses; how to provide more and more people the opportunity to enjoy the benefits of spending time in nature. Lately, we have seen fantastic examples of how designers and architects, urban planners and citizens' organizations have accomplished both large and small-scale projects, from bringing a bit of greenery, and open space to otherwise bleak surroundings, to large-scale neighborhood-changing undertakings.

The 40 Most Spectacular and Mindblowing Photos of Nature A lifetime is not enough to see what nature has to offer and all its beauties, along with its weirdness at times. There’s always something new happening in the world that people can hardly explain and sometimes mysteries are never solved. Pxleyes presents a stunning showcase of 40 images dedicated to the spectacular nature events from all over the world: a show of natural lights and colors, impressive rocky mountains and structures, tons of beautiful blue eyes and many other interesting elements, some almost unheard of.

10 craziest hotels in the world. Hôtel de Glace, Canada – an ice hotel opened only during winter Made entirely of ice and snow, this unique one-story structure has been rebuilt each year since 2000. The 9th season of the Ice Hotel lasted from January 4th through March 29th 2009. The Ice Hotel has become an unparalleled and world-famous winter experience. It takes 5 weeks, 500 tons of ice, and 15,000 tons of snow to craft the Ice Hotel with its ceilings as high as 18 feet, walls covered with original artwork and furniture carved from ice blocks. Waterworld Hotel, China – an amazing aquatic themed hotel Watkins Glen State Park Watkins Glen State Park is the most famous of the Finger Lakes State Parks located on the edge of the village of Watkins Glen, New York, south of Seneca Lake in Schuyler County. The main feature of the park is the hiking trail that climbs up through the gorge, passing over and under waterfalls. The park has a lower part that is next to the village and an upper part that is open woodland.