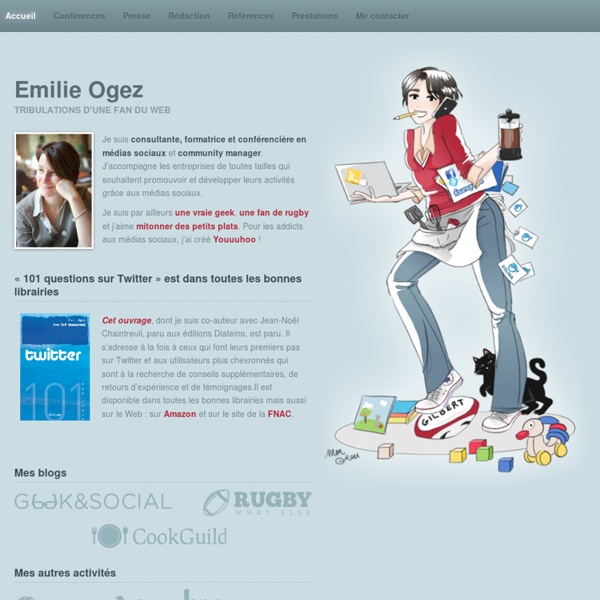 Wonderful Machine Photography Blog Wonderful Machine More Are you a photographer? FOLLOW BY EMAILBlog Jeffrey Totaro // Architect MagazineOct 3, 2017Tear Sheets Check out today's featured tear sheet! Internet Marketing Blog 14 fantastic things we found on the internet this week This round-up covers a whole two weeks’ worth of brilliant entertainments, distractions and hijinks that we found on the internet. Yes the round-up took the extended Easter weekend off. It gorged itself on roasted meats, truffle chocolates and port before swearing at its family and waddling off back home to watch the entire first series of Hannibal in bed. Does that mean that this week’s edition will be a double-bumper load of wonderful content?

John Nack on Adobe February 07, 2014 I’ve Got My Ticket For the Long Way ‘Round… From discovering Adobe my first week in college & sending away $10 for an ATM Light floppy disk, to teaching Photoshop in college & starting a Web design career, to joining the company itself in 2000, I’ve had a very special relationship with this place. It has enabled & enlivened my creativity on so many levels, from making beautiful images & animations to learning how to develop great products. Our little sons were just asking the meaning of BIFURC8 (“Bifurcate”), as seen on our license plate. I explained that it’s about splitting into two pieces.

The Decade in Management Ideas - Our Editors - Harvard Business by Julia Kirby | 9:40 AM January 1, 2010 Tis the season for “year’s best” lists — and even, this year, for “decade’s best” lists — and who are we to resist the urge? A few of us HBR editors (Gardiner Morse and Steve Prokesch helped especially) took the opportunity to look back on the past ten years of management thinking and are ready to declare our choices for the — well, why not say it — most influential management ideas of the millennium (so far). Shareholder Value as a Strategy. The notion of producing attractive returns for investors is as old as investing, but this was a decade when the pursuit of shareholder value eclipsed too much else.

archann.tumblr Only One Website // Facebook // Instagram // Shop Mithya Website // Facebook // Instagram // Shop Synapse Stay Lunar Sabbath is a Lie [be careful of other material] There has been a new doctrine floating about Sabbath keeping Christians the last few years that I honestly thought would never go as far as it has when I saw it rear its ugly head in my neck of the woods back a couple of years ago. But then, I do understand we are very near the end. Therefore I also understand why certain doctrines will be allowed to flourish. The Lord needs to find out who among us are truly seeking to follow Him and His truth instead of the world and its lies.

Feast Days and Sabbaths How many commandments are contained in the Ten Commandments? Does that sound like a foolish question? Then consider the fact that thousands of religious people would give an answer like “94” or “110.” You see, there is a strange belief on the part of many that the great God-written law of the Ten Commandments was actually a part of the ceremonial law of Moses which contained scores of specific regulations. They do not see the decalogue as being distinct and totally unique because of its divine authorship.

Is Sunday Really Sacred? A Wrong Turn One of David’s most beautiful prayers is recorded in Psalm 43:3. “O send out thy light and thy truth: let them lead me; let them bring me unto thy holy hill, and to thy tabernacles.” Sunday Fraud: Church "Fathers" on the Lord's Day Analysis of Common Quotations from by Bob Pickle Introduction The quotations under discussion in this paper can be found posted on a number of web sites. They represent an attempt to show that: The Hardest Logic Puzzle Ever The Hardest Logic Puzzle Ever is a logic puzzle invented by American philosopher and logician George Boolos and published in The Harvard Review of Philosophy in 1996. A translation in Italian was published earlier in the newspaper La Repubblica, under the title L'indovinello più difficile del mondo. The puzzle is inspired by Raymond Smullyan. It is stated as follows: Three gods A, B, and C are called, in no particular order, True, False, and Random.

handwriting tips - StumbleUpon You’ve decided you want to improve your handwriting and you’re probably hoping a fountain pen will do the trick -- maybe a friend told you it would. Maybe you’re just adventurous and you want to try your hand at calligraphy (or you might, once your handwriting improves). Good for you! 7 Basic Things You Won't Believe You're All Doing Wrong If you're like us, you might sometimes have a problem with complex tasks, like trying to drive an ambulance and send a text message at the same time. But hey, at least most of us have figured out the simplest things that get us through the day, right? Except, you know, some of the simple things we've done every day of our lives, like ... What could be simpler than taking a good crap? Even babies are good at it.