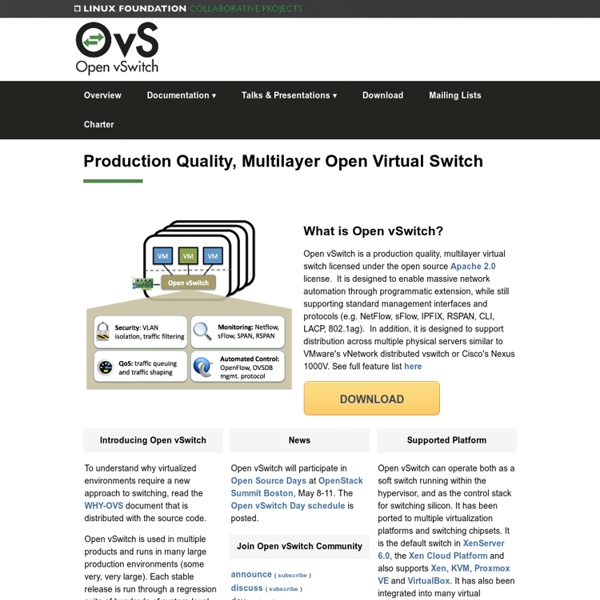 Networking Project Chairs: Omar Baldonado | Carlos Cardenas The Open Compute Networking Project is creating a set of technologies that are disaggregated and fully open, allowing for rapid innovation in the network space. We aim to facilitate the development of network hardware and software – together with trusted project validation and testing – in a truly open and collaborative community environment. We’re bringing to networking the guiding principles that OCP has brought to servers & storage, so that we can give end users the ability to forgo traditional closed and proprietary network switches - in favor of a fully open network technology stack.

Contrail Wants to Be an SDN 'Compiler' Software-defined networking (SDN) is often described as a way of programming the network. Wouldn't it make sense, then, for someone to offer a compiler for the network? That's what startup Contrail Systems wants to do, as executives explained to Light Reading this week. Contrail, based in Santa Clara, Calif., is notable because it's packed with veterans of the big networking vendors, particularly Juniper Networks Inc. The compiler approach, which Kompella noted in a talk at the recent MPLS World Congress in Washington, D.C., isn't the only way to do SDN. In computer programming, a compiler translates a high-level language -- one where the code uses familiar human words -- into executable instructions. Kompella describes it this way: You'd tell Contrail's software how the network should look, who can talk to whom, or which services (like load balancing) traffic should go through. — Craig Matsumoto, Managing Editor, Light Reading

OpenFlow SeaMicro’s Secret Server Changes Computing Economics SeaMicro, a stealthy server company based in Santa Clara, Calif., today scored $9.3 million from the Department of Energy as part of a program to encourage data center efficiency. It’s built a box that contains 512 Atom CPUs, a petabyte of storage, and costs less than $100,000, which it hopes to use to exploit the growing gap in computing workloads that the major server and chip vendors have ignored. From low-power mobile chips to incredibly fast, high-performance silicon, what one executive at Dell called “the dynamic range” of computing has widened. But right now the industry only provides computer users with chips congregated at each end, and nothing for users in between. For web-based companies such as Yahoo, Facebook, and others serving up fairly simple web pages and storing relatively tiny files of user information, the incredible horsepower offered by today’s high-end chips is too much. Image courtesy of Flickr user Torkildr.

Introducing “Wedge” and “FBOSS,” the next steps toward a disaggregated network | Engineering Blog | Facebook Code We’re big believers in the value of disaggregation – of breaking down traditional data center technologies into their core components so we can build new systems that are more flexible, more scalable, and more efficient. This approach has guided Facebook from the beginning, as we’ve grown and expanded our infrastructure to connect more than 1.28 billion people around the world. Over the last three years, we’ve been working within the Open Compute Project (OCP) to apply this principle to open designs for racks, servers, storage boxes, and motherboards. And last year, OCP kicked off a new networking project with a goal of developing designs for OS-agnostic top-of-rack (TOR) switches. Today we’re pleased to unveil the next step: a new top-of-rack network switch, code-named “Wedge,” and a new Linux-based operating system for that switch, code-named “FBOSS.” The hardware: more powerful and more modular Why does this matter? The software: greater accessibility and better control What’s next?

s One Platform Kit (onePK)  [Networking Software (IOS & NX-OS) onePK is an element within Cisco's Open Network Environment software-defined networking (SDN) strategy. onePK is an easy-to-use toolkit for development, automation, rapid service creation, and more. With its rich set of APIs, you can easily access the valuable data inside your network. Build or extend applications from your routers and switches to servers and new business platforms. Automate current services or create new ones on demand, when and where you need them and faster than ever. onePK makes your network more powerful and flexible while giving you the control you need. Users also have access to an all-in-one development environment that includes simulated network elements. Designed for Flexibility onePK has the capability to: Unlimited Possibilities Use onePK for new application-enablement, service automation, and more.

GENI and IF-MAP Network Instrumentation and Measurement | IF-MAP What if you were designing the Internet from scratch? What capabilities would you build into it? How would the protocols work --- would you have chosen TCP/IP? The GENI project looks at all that and more, and takes a "clean-slate" approach to designing a next-generation network from scratch. The project uses IF-MAP to help design how instrumentation and measurement can better work over a network, based on research being done by Deniz Gurkan, Assistant Professor of Engineering at the University of Houston. GENI (short for Global Environment for Network Innovations) is sponsored by the National Science Foundation, and provides collaborative and exploratory environments for academia, industry and the public to find discoveries and innovation in emerging global networks. "Measurements can be a network resource, just like bandwidth," she explains. That's where IF-MAP comes in. Of course, that's well into the future. Resources GENI Web site 12th GENI Engineering Conference (GEC12)

Tools and Libraries OpenCL™ is the first truly open and royalty-free programming standard for general-purpose computations on heterogeneous systems. Open Computing Language allows programmers to preserve their expensive source code investment and easily target multi-core CPUs, GPUs, and the new APUs. Developed in an open standards committee with representatives from major industry vendors, OpenCL™ gives users what they have been demanding: a cross-vendor, non-proprietary solution for accelerating their applications on CPU, GPUs and APUs. AMD, an early supporter of OpenCL™, and leading innovator and provider of high-performance CPUs and GPUs, is uniquely positioned in this industry to offer a complete acceleration platform for OpenCL™. Getting Started with OpenCL™ Since AMD’s OpenCL™ release works on both x86 CPUs as well as AMD GPUs, you can get started coding in OpenCL™ immediately Tools & Libraries A variety of tools and libraries exists today for developers interested in writing OpenCL™ applications Training

Java (programming language) Duke, the Java mascot Sun Microsystems released the first public implementation as Java 1.0 in 1995.[1] It promised "Write Once, Run Anywhere" (WORA), providing no-cost run-times on popular platforms. Fairly secure and featuring configurable security, it allowed network- and file-access restrictions. In 1997, Sun Microsystems approached the ISO/IEC JTC1 standards body and later the Ecma International to formalize Java, but it soon withdrew from the process.[16] Java remains a de facto standard, controlled through the Java Community Process.[17] At one time, Sun made most of its Java implementations available without charge, despite their proprietary software status. On November 13, 2006, Sun released much of Java as free and open source software, (FOSS), under the terms of the GNU General Public License (GPL). There were five primary goals in the creation of the Java language:[23] Major release versions of Java, along with their release dates: Garbage collection may happen at any time.

Open Switches Squeeze Networking Incumbents February 26, 2015 Timothy Prickett Morgan The so-called industry standard server, by which most people mean a machine based on an X86 processor and generally one made by Intel, has utterly transformed the datacenter. The ubiquity and compatibility of X86 machinery has in many ways radically simplified the infrastructure of computing and reduced the market to a few handfuls of server suppliers and Linux or Windows being the operating system of choice for the vast majority of workloads. If some major hyperscale datacenter operators and networking upstarts have their way, it will not be too long before we talk about industry-standard networking hardware, with common hardware and only a few network operating systems – very likely open source and therefore malleable by vendors and customers alike. Open For Business There is a lot of money at stake here as end user companies make the inevitable shift from closed, appliance-style switching to open networking.