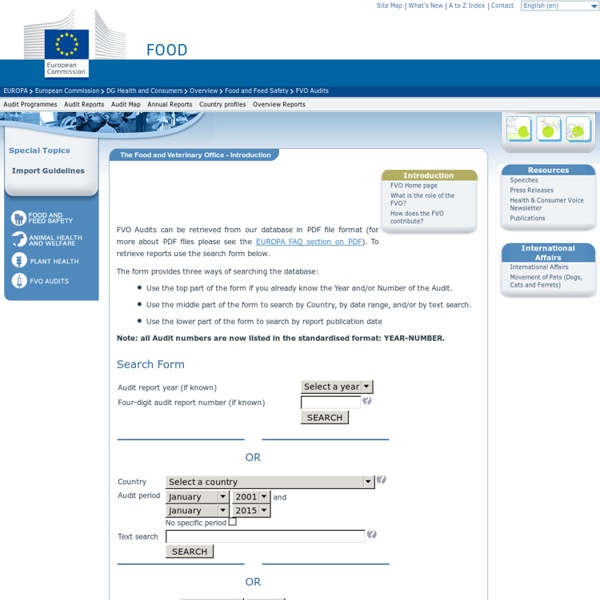 requires javascript FVO Audits can be retrieved from our database in PDF file format (for more about PDF files please see the EUROPA FAQ section on PDF). To retrieve reports use the search form below. The form provides three ways of searching the database: Use the top part of the form if you already know the Year and/or Number of the Audit. Use the middle part of the form to search by Country, by date range, and/or by text search. Search Form

FSA 04/03/15 Review of approaches for establishing exclusion zones for shellfish harvesting around sewage discharge points The study undertook a review of published and unpublished scientific literature relating to setting and management of exclusion zones (preventing oyster harvesting) to mitigate viral risks from point source sewage discharges. The review included a comparison between norovirus and other viral models with respect to environmental degradation and bioaccumulation factors and also considered the significance of wastewater discharges from diffuse sources (eg pleasure craft) and their capacity to be controlled by norovirus exclusion zones. Review activities incorporated the essential elements of a systematic review supported by direct contact with known working groups. Overseas experience with respect to exclusion/buffer zones from European settings and US/NSSP based suppliers was also reviewed.

2010 Eurobarometer survey report on risk perception in the EU 2010 Eurobarometer survey report on risk perception in the EU The Eurobarometer survey on consumers’ perceptions of food-related risks was commissioned by EFSA. It is the second such study to be carried out in five years. WIKIPEDIA - Rice production in Bangladesh. Rice production in Bangladesh is a crucial part of the national economy[1] The dominant food crop of Bangladesh is rice, accounting for about 75 percent of agricultural land use (and 28 percent of GDP).[1] Rice production increased every year in the 1980s (through 1987) except FY 1981, but the annual increases have generally been modest, barely keeping pace with the population. Rice production exceeded 15 million tons for the first time in FY 1986. In the mid-1980s, Bangladesh was the fourth largest rice producer in the world, but its productivity was low compared with other Asian countries, such as Malaysia and Indonesia.[1] It is currently the world's sixth-largest producer. Highyield varieties of seed, application of fertilizer, and irrigation have increased yields, although these inputs also raise the cost of production and chiefly benefit the richer cultivators. The cultivation of rice in Bangladesh varies according to seasonal changes in the water supply.

EUROPE 27/01/16 Rapport : EU Member States fight Longhorn Beetles Longhorn beetles introduced from non-European regions are extremely damaging pests as they attack healthy and vigorous deciduous trees and shrubs causing their death and can establish in the majority of EU Member States. Their spread poses a threat to the environment and causes damage predominantly in urban areas. The main pathway for the introduction of these pests is through imports of infested woody planting material and infested wood packaging material (pallets, wood crates etc.). CEFAS 17/07/15 Molluscan shellfish diseases and how to prevent the spread Below is the background to the molluscan diseases that the Cefas Fish Health Inspectorate (FHI) regulated in 2014. The controls have evolved over several decades. And, to put them in context, their purpose is to allow the UK to trade freely with Europe and the rest of the world, whilst still offering protection to the health status of our farmed and wild shellfish. We take the role seriously, and will always strive for the highest level of protection available to us as a nation. However it is vital for everyone to understand their individual role in disease prevention.

WIKIPEDIA – agriculture in Bangladesh. Map showing the growing areas of major agricultural products. Bangladesh has a primarily agrarian economy. Agriculture is the single largest producing sector of the economy since it comprises about 18.6% (data released on November, 2010) of the country's GDP and employs around 45% of the total labor force.[1] The performance of this sector has an overwhelming impact on major macroeconomic objectives like employment generation, poverty alleviation, human resources development and food security. A plurality of Bangladeshis earn their living from agriculture.

PARLEMENT EUROPEEN - Réponse à question E-000177-17 Import controls on the Asian Long-horned Beetle It is well known that the Asian Long-horned Beetle (ALB) finds its way into Europe on wood used in packaging from China. Spot checks are therefore carried out on relevant consignments at the time of import. In 2013, the Federal Forestry Office (BFW) in Austria carried out plant health checks and found ALB infestation in 8% of consignments. (BFW Forest Protection Institute, ‘Forstschutz Aktuell’, No 59, August 2015). EFTA SURVEILLANCE AUTHORITY 24/08/15 FOOd Safety: Unsatisfactory official controls on live bivalve molluscs in Norway Norway does not fully comply with the legal requirements for harvesting and placing on the market of live bivalve molluscs. The situation has not improved much since the previous inspection done by the EFTA Surveillance Authority six years ago. This is the main conclusion in a report published by the the Authority today, following an audit carried out in Norway in April 2015.

PARLEMENT EUROPEEN - Réponse à question E-000156-17 Establishment of the Asian long-horned beetle Since the Asian long-horned beetle (ALB) was first identified in Germany in 2004, the number of finds of fresh infestations has increased steadily. On how many examples of ALBs at all stages of development have population and genetic studies been carried out, and what were the findings (e.g. as regards family relationships, spread, pathways, adjustment to new habitats, etc.)? If genetic studies were not carried out on all the examples found, can the Commission say why? Food Control Volume 60, February 2016, Time trends in the prevalence of Escherichia coli and enterococci in bivalves harvested in Norway during 2007–2012 Open Access Highlights A weak positive correlation between enterococci and Escherichia coli were seen. There was a weak positive correlation between high counts of E. coli/enterococci and increased rainfall. When using enterococci as indicator organisms, a more sensitive method than conventional plate assays should be considered. The number of faecal indicator organisms wary greatly between localities for cultivation of blue mussels.