Everlane - Marketing Week. Rêve En Vert - Sustainable Style Online. Sophie Slater Birdsong Giving Up Fast Fashion. Everlane kicks off a radical transparency tour with L.A. events. San Francisco-based Web-only apparel and accessories brand Everlane, which has made the notion of transparency a fundamental tenet of its high-quality, lower-cost business model, is taking its message to the street with a novel marketing campaign that kicked off in Los Angeles earlier this week. 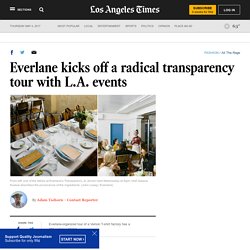 Everlane’s Transparent City Series, which got underway here Tuesday afternoon, has already given customers, potential customers and friends of the brand opportunities to meet L.A. -based artist Tofer Chin in a downtown art gallery, get behind the scenes at Alfred Coffee on Melrose and attend a 40-person dinner at Sqirl in Silver Lake at which chef Jessica Koslow popped out between courses to painstakingly share the provenance of her ingredients. This isn’t the first time the 4-year-old e-tailer has taken its philosophy – and its product – out into the marketplace to give customers a chance to see and feel the products. U.K. Population (2014) Notes The United Kingdom Population (Live) counter shows a continuously updated estimate of the current population of the United Kingdom delivered by Worldometers' RTS algorithm, which processes data collected from the United Nations Population Division. 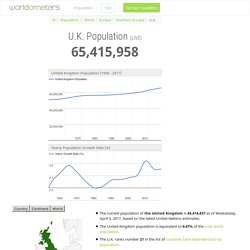 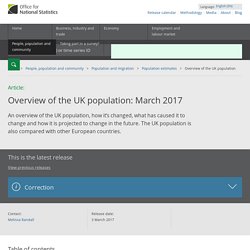 The percentage of the population that is 65 years or older is growing. It increased between 1975 and 2015, from 14.1% of the population to 17.8%. It is projected to continue to grow to nearly a quarter of the population by 2045 (Table 1). The way we shop now: the revolution in British spending habits. They call it the “experience economy”: a huge shift in consumer behaviour is said to be under way, from buying things to doing things. 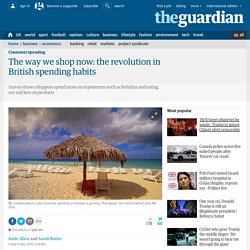 The demise of high street stalwarts BHS and Austin Reed, poor retail spending figures and a downturn in the number of people visiting high streets and shopping centres, are all being held up as evidence that Britons’ priorities are changing. Earlier this year a senior Ikea executive warned that the appetite of western consumers to own ever more goods and chattels was probably waning. “In the west”, he warned, “we have probably hit peak stuff.” Now retailers ranging from fashion to food chains are making similar observations, because official data shows that households are spending less on clothes and food but more on holidays, cars, entertainment and eating out.

Spending on gadgets that keep people connected to the internet is also on the rise. From Field To Shop Floor: The Journey Of Your Clothes. Fashion Transparency Index 2017 by Fashion Revolution. Subscribe to read. Family spending in the UK - Office for National Statistics. The Living Costs and Food Survey Technical Report and corresponding QMI, contains important information on: the strengths and limitations of the data and how it compares with related datauses and users of the datahow the output was createdthe quality of the output including the accuracy of the data Description of the survey All the findings in this bulletin are taken from data collected on the Living Costs and Food Survey (LCF). 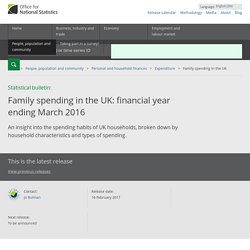 The LCF is a UK household survey, designed to provide information on household expenditure patterns and food consumption. The LCF is a voluntary sample survey of private households. Great care is taken to ensure complete confidentiality of information and to protect the identity of LCF households. US trade deal with the UK 'could take place in the next two years' The Power of Buying Less by Buying Better - The Atlantic. According to a recent survey commissioned by the British charity Barnardo’s, a majority of women’s garments are worn a mere seven times before being pushed to the back of the closet or tossed into the garbage. 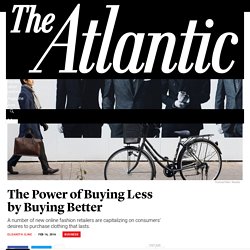 Online Retailer Everlane Wants to Raise New Money at a Valuation North of $250 Million - Recode. Radical Transparency? H&M and Zara Are Actually More Transparent Than Everlane. As such, one could argue that there is the very real possibility that Everlane’s supplier factories simply are not as ethical or sustainable as Everlane is portraying them to be, and that is why the brand relies on citing trade secret concerns as a means of avoiding disclosing them. 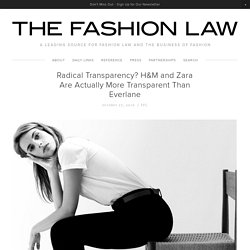 Consider that Level Style, Inc. – which, according to U.S. import records, provides Everlane with an array of shirt styles, including its Slim Fit Oxford and Slim Fit Denim shirt – has come under fire within the past year or so for labor-related issues. According to HKCTU, Everlane was an existing client of Shenzhen Artigas Clothing and Leather factory at the time of the factory closure and subsequent striking (Around 900 employees began striking in June 2015 at the company's Shenzhen Artigas Clothing & Leather factory over severance pay and relocation of the factory. 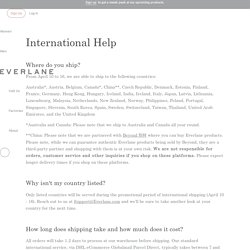 Only listed countries will be served during the promotional period of international shipping (April 10 - 16). The Rise of Direct to Consumer Brands: Revolution or Evolution? Amid the intensifying pressures of price competition and the rise of Amazon as a global force, another disruptive trend is becoming too big to ignore: the rise of direct to consumer (DTC) brands. 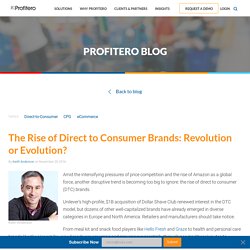 Unilever’s high-profile, $1B acquisition of Dollar Shave Club renewed interest in the DTC model, but dozens of other well-capitalized brands have already emerged in diverse categories in Europe and North America. Retailers and manufacturers should take notice. From meal kit and snack food players like Hello Fresh and Graze to health and personal care brands like the Honest Co., new brands are emerging and growing exponentially through non-traditional routes to market, some leveraging early success to later gain share of shelf at traditional retailers. Market Reports - Santandertrade.com. H&M Launches New High Street Brand Arket - Refinery29. Uk statistical analysis of us trade cy 2015. Theresa May to give Britain lowest corporation tax of world's top 20 economies. UK fashion industry statistics & fashion retail stats. • £57.7 billion – was spent on clothing, footwear & accessories in 2015, forecasted to grow at a rate of 12.89% between 2015 to 2020 (Planet Retail, 2015) • £26 billion – the direct contribution to the UK economy (GDP) from the UK fashion industry, up from £21billion in 2009 (Oxford Economics, 2014) • £12.4 billion – how much the clothing and footwear market is forecasted to make in 2020 (Verdict Retail, 2015) • £10.3 billion – men’s and women’s footwear sales in 2015, increased by 6.5% over previous year (Mintel, 2015) • £32.2 billion – British luxury goods industry sales contribution in 2013, valuing the sector at 2.2% of the UK’s GDP, with £51.1 billion projected sales of British luxury goods by 2019. 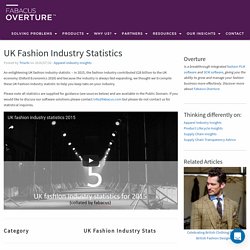 The rise of the direct-to-consumer model (it's not just Dollar Shave Club) Dollar Shave Club has come a long way in just four years and is the most oft-cited direct-to-consumer model in FMCG. The brand had a wildly successful viral ad and sells a subscription to razors for as little as three dollars per month - its sales reached $152m in 2015. Recently, the company’s success was cemented when Unilever snapped it up for a cool $1bn. Everlane kicks off a radical transparency tour with L.A. events. Everlane billboard. UK GDP figures show solid end to 2016 despite Brexit vote. Buoyant consumer spending kept the UK economy growing at the brisk pace of 0.6% in the final quarter of 2016, marking a strong finish to the year despite the Brexit vote. The initial estimate for fourth-quarter GDP from the Office for National Statistics matched the 0.6% growth recorded in the third and second quarters. It was a touch better than the 0.5% rise expected by City economists. Businessinsider.

5 Ways Fashion Retailer Everlane Earned Insane Word-of-Mouth - Word-of-Mouth and Referral Marketing Blog. Some of us are very conscientious when we look at where our food comes from. We check to see if the fruits have pesticides, are the eggs free-range, and whether that orange juice is pasteurized. But most of us have no idea about how our clothes, bags or shoes are made. Everlane, an apparel company started in 2011, has a policy of Radical Transparency that aims to change all of that. Founded by Michael Preysman on the premise that customers should know what goes on behind each price tag, Everlane promises to be transparent in every aspect of their business, and to deliver high-quality products at affordable prices by skipping unnecessary middlemen. Popular on Designspiration. Everlane Social Media Analysis. Everlane - Brand Audit. Fashion x Tech Week 2014 - How Everlane Succeeded by Acting Like a Technology Company. Part of Style.com’s Fashion x Tech Week. When Michael Preysman started his online-only clothing label, Everlane, three years ago, the crowds were skeptical.

The clothes were well made but relatively basic, similar to the type of goods that J.Crew had been selling for years. What was the catch? Basic Apparel. Glossy: Fashion, Luxury, Technology. Subscribe: iTunes | Stitcher | RSS Sustainability is a much tossed around buzzword in fashion at the moment. But a majority of the industry has failed to go beyond superficial marketing initiatives and make real progress. Kathleen Wright is out to make that change. Reaching the Dutch consumer - Santandertrade.com. Growing Sectors. AYR (clothing label) - Wikipedia. AYR is a privately owned women’s apparel brand based in New York City. How mass retailers are traversing 'big transparency' Fashion, Luxury, Technology. Être dans la lune; Link Buzz: Everlane Calls J.Crew a Copycat, Cara Delevingne Not Taking Criticism Lying Down. EVERLANE. Online Retailing: Britain, Europe, US and Canada 2017 - Centre for Retail Research, Nottingham UK. COMMENT: 2015: Welcome to the new fashion consumer.

A new fashion consumer with new values and new connectivity is redefining fashion - and the industry is responding with new business models structured around customer demand. The Affordable Fashion Brand Changing The Face Of Ethical Shopping. Providing Affordable Luxury-Quality Clothing to the Masses at Age 29. Michael Preysman on Iterating Everlane and ‘Fixing’ Fashion Retail. SAN FRANCISCO, United States — Michael Preysman was a 25-year-old with dual degrees in computer engineering and economics, and some experience in private equity, when he realised fashion retail was broken. Everlane’s First Brick-And-Mortar Shop Is A Minimalist Wonderland. The trajectory of retail has once again shifted course. Knowing the Cost of Everything at Everlane’s Open House - Speakeasy - WSJ. How You Can Use Native Advertising for Your Small Business. Everlane - Marketing Week. Subscribe to read. Everlane. Uk photography. Everlane. 28 10 2016 ar. Best Cities for Millennials 2017 - World Ranking.