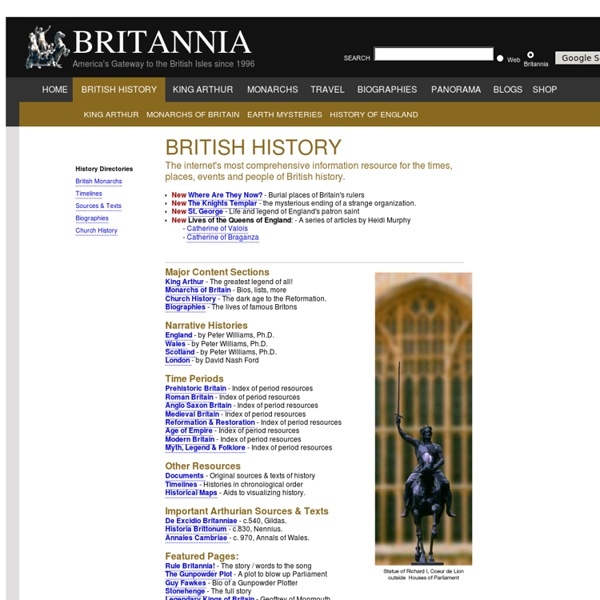 Narrative History of England If there can be such an entity as a brief history of England, I hope I am not being too presumptuous in attempting to provide one for the general reader. To compress time and thousands of years of UK history into a readable, and I hope entertaining few chapters, is a daunting task indeed, but here at Britannia we have turned back our watches and hope to do just that. We can discover the ancient landscapes, historical monuments, Roman remains, medieval towns, Georgian squares and modern architectural wonders together in a blend of history and travel. In so doing, we can determine just what made the tiny country of England so powerful a force in world history, out of proportion to its size and population. Naturally, our study will be concerned with the lives of the men and women who contributed to the history of their great nation, for good or for ill. Part 1: Prehistoric Period

- The Washington Post The tourism invasion began, in part, because of James Fenimore Cooper and his Leatherstocking Tales, Pagnamenta reports. Natty Bumppo and his fellow travelers were popular among English readers, and the stories of life on the frontier whetted the appetites of young British men who found themselves in unusual straits. In that era, the eldest son stood to inherit the family estate, while younger male siblings received allowances but few responsibilities. What to do with the indolent rich was a conundrum, since working for a living was outside the sphere of social respectability. One solution was to send them packing to America, lured by the tales of buffalo hunts, Indian skirmishes and the taste of hardy adventure. One of the first to make the trip was Sir William Drummond Stewart, who was particularly taken with Cooper’s 1827 novel, “The Prairie,” and its descriptions of vast herds of buffalo. One of the highest-profile offenders was Sir St.

Free eBooks Wikiversity History of the archbishops of ... MacroHistory : World History How old is English?