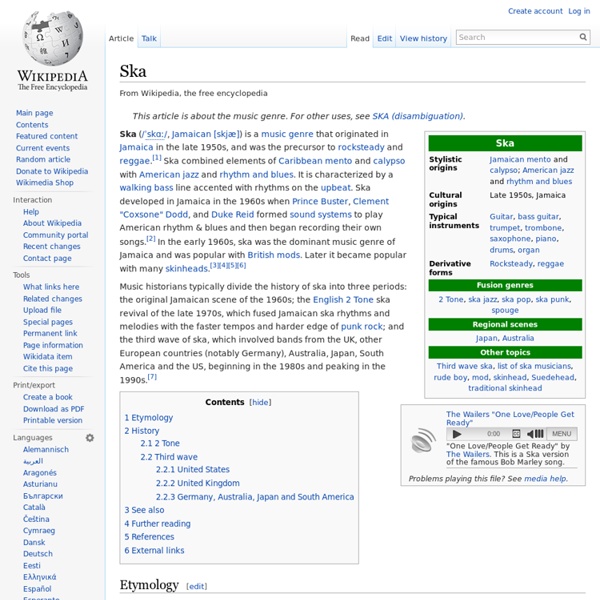 Etymology[edit] There are different theories about the origins of the word ska. Ernest Ranglin claimed that the term was coined by musicians to refer to the "skat! History[edit] Byron Lee & the Dragonaires performed ska with Prince Buster, Eric "Monty" Morris, and Jimmy Cliff at the 1964 New York World's Fair. 2 Tone[edit] Third wave [edit] Third wave ska originated in the 1980s and became commercially successful in the 1990s. United States[edit] The mid-1990s saw a considerable rise in ska music's underground popularity, marked by the formation of many ska-based record labels, booking organizations and indie zines. By the late 1990s, mainstream interest in third wave ska bands waned as other music genres gained momentum.[35] Moon Ska Records folded in 2000, but Moon Ska Europe, a licensed affiliate based in Europe, continued operating in the 2000s and was later relaunched as Moon Ska World. United Kingdom[edit] Germany, Australia, Japan and South America[edit]

Reel Big Fish History[edit] Early success (1992-1999)[edit] Reel Big Fish released a demo in 1992 which is now called "In The Good Old Days". With the departure of Ben Guzman, then backup vocalist Aaron Barrett took his place as lead singer. The band then changed their genre to ska. Major label years (2000-2005)[edit] On April 5, 2005, Reel Big Fish released their fourth album on Mojo; We're Not Happy 'Til You're Not Happy. Compared to the previous album (Cheer Up!) Aaron Barrett has stated that We're Not Happy 'Til You're Not Happy was "the third record in a trilogy" that began with Turn the Radio Off. Independent work (2006-present)[edit] While on tour in early 2006, Reel Big Fish were dropped from the Jive Records label. On February 20, 2007, the band released Duet All Night Long, which is a split EP with Zolof the Rock & Roll Destroyer. On December 19, 2007, the band announced that they would play the entire Warped Tour 2008.[5] Band members[edit] Current members Former members Timeline[edit] Studio albums

The Mighty Mighty Bosstones The Mighty Mighty Bosstones (informally referred to as The Bosstones) are an American ska-core band from Boston, Massachusetts, formed in 1983.[1][2][3] Since the band's inception, lead vocalist Dicky Barrett, bassist Joe Gittleman, tenor saxophonist Tim "Johnny Vegas" Burton and dancer ("Bosstone") Ben Carr have remained constant members. The line-up also includes drummer Joe Sirois, saxophonist Kevin Lenear, guitarist Lawrence Katz and trombonist Chris Rhodes. The Bosstones are often credited as one of the progenitors of the genre of ska punk and the creators of its sub-genre ska-core, a form of music which mixes elements of ska with punk rock and hardcore. History[edit] Early history (1983–1988)[edit] In 1987, the Bosstones made their recorded debut when they were featured on the Mash It Up ska compilation. Taang! Despite not consistently drawing large crowds at their live shows, the Taang! In 1991, the band set out on their first full American tour. Once again produced by Paul Q.

Sublime (band) Eric Wilson and Bud Gaugh were childhood friends, having grown up in the same Long Beach neighborhood. Eric's father Billy Wilson taught Gaugh how to read music and play the drums. Gaugh and Wilson together with future Sublime manager Michael Happoldt formed a three-piece punk band called The Juice Bros during their high school years. About this time, Bradley Nowell, who had recently dropped out of University of California, Santa Cruz, joined the band. Nowell helped introduce Gaugh and Wilson to reggae and ska, who at the time listened exclusively to punk rock.[6] Following Sublime's demise, its surviving members Eric Wilson and Bud Gaugh formed the Long Beach Dub Allstars in 1997, which also included many frequent Sublime contributors such as Michael "Miguel" Happoldt (former member of The Ziggens), Marshall Goodman "Ras MG" (former Sublime member), and Todd Forman (3rd Alley).

Faith No More History[edit] Early years[edit] Faith No More was originally formed as Faith No Man in 1981 by bassist Billy Gould, drummer Mike Bordin, vocalist Mike "The Man" Morris, and keyboardist Wade Worthington. A year later Worthington was replaced by keyboardist Roddy Bottum who, along with Gould and Bordin, formed Faith No More without Morris. They chose the name to accentuate the fact that "The Man" (Mike Morris) was "No More". We Care a Lot and Introduce Yourself (1981–1988)[edit] After the name change, the band initially started recording We Care a Lot without backing from a record label and, after pooling their money, recorded five songs. Mike Patton joins and The Real Thing (1989–1991)[edit] In February 1991, Faith No More released their only official live album, Live at the Brixton Academy. In 1991, the band contributed a track for the motion picture soundtrack to Bill & Ted's Bogus Journey with the song "The Perfect Crime". Angel Dust (1992–1994)[edit] King for a Day... Legacy[edit]

Red Hot Chili Peppers History[edit] Early history (1983–1984)[edit] Building a following and Slovak's death (1985–1988)[edit] In the spring of 1986, the band decided to begin work on their upcoming album. EMI gave the band a budget of $5,000 to record a demo tape, and the band chose to work with producer Keith Levene, because he shared the band's interest in drugs.[24] Levene and Slovak decided to put aside $2,000 of the budget to spend on heroin and cocaine, which created tension between the band members. Martinez' "heart was no longer in the band", but he did not quit, so Kiedis and Flea fired him.[25] After the firing of Martinez in April 1986, original drummer Jack Irons rejoined the band to Kiedis, Flea, and Slovak's great surprise, which marked the first time all four founding members were together since 1983. The band won the LA Weekly "Band of the Year Award," which prompted Kiedis to get clean in order to continue making music. Successful new line-up (1988–1990)[edit]

East Coast–West Coast hip hop rivalry The East Coast–West Coast hip hop rivalry was a feud in the 1990s between artists and fans of the East Coast hip hop and West Coast hip hop scenes in the United States. Focal points of the feud were East Coast-based rapper The Notorious B.I.G. (and his label, Bad Boy Records) and West Coast-based rapper 2Pac (and his label, Death Row Records), both of whom were murdered by unknown assailants. Backgrounds of the Coasts[edit] Origins[edit] Hip hop emerged in the 1970s on the gritty streets of South Bronx. Emergence of the West Coast[edit] In 1986, inspired by Philadelphia rapper Schoolly D, Crenshaw-based Ice-T released the song "6 in the Mornin'". With the help of friend Jerry Heller, Eazy-E founded Ruthless Records on March 3, 1987. The group's debut album was released later in the year. At Death Row, Dr. Revival of the East[edit] In April 1994, a 20 year old, Queens-based emcee by the name of Nas released Illmatic. The rivalry[edit] Tim Dog[edit] Bad Boy vs. "Puff Daddy" Sean Combs 2Pac vs.

Grunge A number of factors contributed to grunge's decline in prominence. During the mid-to-late 1990s, many grunge bands broke up or became less visible. Nirvana's Kurt Cobain, labeled by Time as "the John Lennon of the swinging Northwest", appeared unusually tortured by success and struggled with an addiction to heroin before he died by suicide at the age of 27 in 1994. Origin of the term Some bands associated with the genre, such as Soundgarden, Pearl Jam and Alice in Chains, have not been receptive to the label, preferring instead to be referred to as "rock and roll" bands.[18][19][20] Ben Shepherd from Soundgarden stated that he "hates the word" grunge and hates "being associated with it Characteristics Musical style Seattle music journalist Charles R. Instruments Electric guitar The relatively affordable, widely available BOSS DS-2 distortion pedal was one of the key effects (including the related DS-1) that created the growling, overdriven guitar sound in grunge. Guitar solos Bass guitar Drums

Alternative rock Alternative rock (also called alternative music, alt-rock or simply alternative) is a style of rock music that emerged from the independent music underground of the 1980s and became widely popular in the 1990s. In this instance, the word "alternative" refers to the genre's distinction from mainstream rock music. The term's original meaning was broader, referring to a generation of musicians unified by their collective debt[clarification needed] to either the musical style or simply the independent, DIY ethos of punk rock, which in the late 1970s laid the groundwork for alternative music.[4] At times, "alternative" has been used as a catch-all description for music from underground rock artists that receives mainstream recognition, or for any music, whether rock or not, that is seen to be descended from punk rock (including some examples of punk itself, as well as new wave, and post-punk). Origin of term[edit] Characteristics[edit] History[edit] 1980s[edit] Popularization in the 1990s[edit]

Korn History Early years and formation (1989–1993) Korn's original logo. When thinking of a band name, someone suggested "corn", but the band rejected that name, so Shaffer had the idea to spell the name with both a "K" instead of a "C", and a backwards "R", so the band's name would appear as "KoЯn".[26] The logo was designed by vocalist Jonathan Davis.[7] Silveria explained, "the music makes the name, because Korn's a dumb name. But once we get established, it makes the name cool. Korn (1994–1996) Life Is Peachy (1996–1997) …We went in really fresh, and we wanted to get it done quickly to capture that energy. David Silveria on Life Is Peachy's drum quality.[46] Follow the Leader and mainstream breakthrough (1998–1999) Issues (1999–2001)

Limp Bizkit History[edit] Formation and early years (1994–1996)[edit] Three Dollar Bill, Yall' (1997–1998)[edit] Following the release of Three Dollar Bill, Yall, vocalist Fred Durst was appointed Senior Vice President of A&R at Interscope. Interscope proposed to the band that the label pay $5,000 to guarantee that a Portland, Oregon radio station play the song "Counterfeit" fifty times, preceded and concluded with an announcement that the air time was paid for by Interscope.[6][7] The paid air time was criticized by the media, who saw it as "payola".[6][7] The band's manager Jeff Kwatinetz later termed the plan as a "brilliant marketing move".[6] Durst stated, "It worked, but it's not that cool of a thing After completing Ozzfest, Limp Bizkit took a break from performing, and later performed on Korn's Family Values Tour. Significant Other (1999–2000)[edit]

Pop punk Pop-influenced punk rock emerged in the mid 1970s in multiple countries, and was stylistically similar to power pop. By the early 1980s, several bands merged hardcore punk with pop music to create a new, faster pop punk sound. Pop punk particularly thrived in California, where independent record labels adopted a do it yourself (DIY) approach to releasing music. Characteristics[edit] Allmusic describes pop punk as a strand of alternative rock that typically merges pop melodies with speedy punk rock tempos, chord changes and loud guitars.[1] About.com has described second-wave pop punk bands as having "a radio friendly sheen to their music, but still maintaining much of the speed and attitude of classic punk rock".[2] History[edit] Origins (1974–1989)[edit] The Ramones performing in Norway in 1980. The Descendents "wrote almost surfy, Beach Boys–inspired songs about girls and food and being young(ish)".[18] Popular acceptance (1994–1998)[edit] Mainstream peak (1999–2005)[edit]

Green Day History Formation and Lookout! years (1987–1993) In 1988, Larry Livermore, owner of Lookout! Breakthrough success (1994–1996) Armstrong performing in 1994. Though the album did not approach the success of Dookie, it sold two million copies in the United States.[23] In addition, the album won the band award nominations for Favorite Artist, Favorite Hard Rock Artist, and Favorite Alternative Artist at the 1996 American Music Awards, and the video for "Walking Contradiction" got the band a Grammy nomination for Best Video, Short Form, in addition to a Best Special Effects nomination at the MTV Video Music Awards. Middle years and decline in commercial success (1997–2002) In the spring of 2002, Green Day co-headlined the Pop Disaster Tour with Blink-182 which was documented on the DVD Riding in Vans with Boys.[31] American Idiot and renewed success (2003–2006) Tré Cool (bottom left) and Mike Dirnt (right) performing on July 27, 2005. Green Day live in Germany during the American Idiot tour.