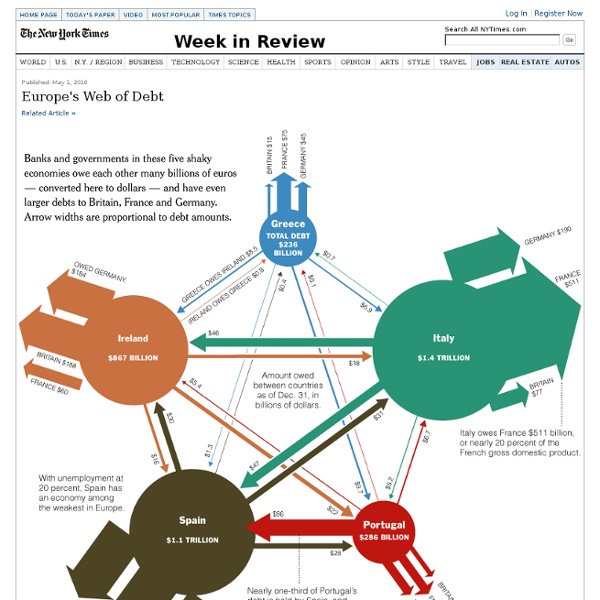 WorldWise Is the spread of the Western higher education model around the world evidence that repressive colonialism is alive and well in academe? Apparently so, according to a statement issued by participants in the International Conference on Decolonizing Our Universities, held recently at the Universiti Sains Malaysia in Penang. The authors of the manifesto, which I read about last week in GlobalHigherEd, minced no words in describing the alleged harm done to universities outside the West by “the tutelage and tyranny of Western institutions.” It’s Not About Greece Anymore - Economix Blog Louisa Gouliamaki/Agence France-Presse — Getty Images Protesters at the Acropolis in Athens waved flags and hung banners in front of the Parthenon. Peter Boone is chairman of the charity Effective Intervention and a research associate at the Center for Economic Performance at the London School of Economics. He is also a principal in Salute Capital Management Ltd.

Spain’s government and European authorities bent on dismantling welfare state from Mark Weisbrot MADRID — I have argued for some time now that the recurring crisis in the eurozone is not driven by financial markets’ demands for austerity in a time of recession – as is commonly asserted. Rather, the primary cause of the crisis and its prolongation is the political agenda of the European authorities – led by the European Central Bank and European Commission. Decolonising our universities: another world is desirable Editors’ n ote: the statement below was issued by participants at the end of the International Conference on Decolonising Our Universities conference at Universiti Sains Malaysia (June 27-29, 2011, Penang, Malaysia). We’ve posted it here as it facilitates consideration of some of the taken-for-granted assumptions at play in most debates about the future of higher education right now. This statement, most of the talks presented at it, and this memorandum to UNESCO, reflect an unease with the subtle tendencies of exclusion (of ideas, paradigms, models, options, missions) evident in the broad transformations and debates underway in most higher education circles, including in rapidly changing South and Southeast Asia.

Reuters Breakingviews - The Long Reach of a Foreign Crisis - NYT Ramin Talaie/Bloomberg News “Nude, Green Leaves and Bust,” by Picasso, sold Tuesday for $106.5 million. American investors got a sampling this week of what further deterioration in the euro zone could taste like. On the good side, investors rushed into perceived harbors: and Uncle Sam’s own debt. On the bad side, the swoon in prices of American shares and corporate debt indicated the long reach of a foreign crisis. Spain's Election is Set to Worsen the Crisis in Europe For Europe, it turns out that November is the cruelest month: The debt crisis will claim at least three eurozone governments before it is over. Yet, unlike in Greece, where Prime Minister George Papandreou resigned last week, and in Italy, where Prime Minister Silvio Berlusconi stepped down over the weekend, the political crisis upending Spain is toppling the government in slow motion. Facing dwindling public support, an unemployment rate of more than 20 percent, and the increasing cost of Spanish debt, the country's Socialist Prime Minister José Luis Rodríguez Zapatero threw in the towel last July and called for early elections to be held on November 20, four months ahead of schedule. By all accounts, the election is expected to be a landslide. The current deputy prime minister of the Spanish Socialist Workers' Party (PSOE), Alfredo Pérez Rubalcaba, will face the seemingly perennial candidate of the conservative Popular Party (PP), Mariano Rajoy. To continue reading, please log in.

University World News - IRAN: Students killed, arrested in Egypt-style protests Two students were killed this week in a major eruption of anti-government demonstrations in Iran inspired by events in Egypt and Tunisia. The funeral of one of the students sparked further clashes in Tehran amid reports of unrest in other university towns. Tehran University of Fine Arts student Sanee Zhaleh and another student named as Mohammed Mokhtari were shot in the streets during a banned protest in Tehran on Monday. The protests were in response to a rally call from opposition leaders Mir Hosein Mousavi and Mehdi Karroubi, the former parliamentary speaker, to march in support of the recent Arab uprisings. The opposition leaders were held under house arrest and not allowed to join the first major demonstrations in the country since the 2009 protests sparked off by the disputed elections in June that year. Analysts said the government's strategy was to isolate the 'Green' opposition movement leaders from their student support base.

Greece's sovereign-debt crunch: A very European crisis Illustration by Robert Venables SOME would say that tragedy was inevitable from the moment, nine years ago last month, when Greece was admitted to the euro zone. Others would claim that woe was sure to befall such a disparate currency union sooner or later: if not Greece, then some other weak member of the club would have been the cause. Avoidable or not, trouble has arrived. At best, Greece has to undergo a dramatic budgetary tightening. Its fellow Europeans, or the IMF, may yet have to organise a humiliating bail-out.

Bank of Spain Balance Sheet Shows Spain Deep in Trouble, LTRO is Essentially Useless CDS rates to protect against default by Spain rose to an all-time high today as Investors brace for more pain in Spain. Spain was firmly back in the spotlight on Friday, after news of a sharp rise in borrowing by the region’s banks from the European Central Bank triggered losses across European stocks, but especially for the IBEX 35 index XX:IBEX -3.58% , which fell more than 3% to a three-year low.The yield on the 10-year government bond in Spain ES:10YR_ESP +0.0004% , which had appeared to get some relief in the latter half of the week, resumed a climb upward, rising 15 basis points to around 5.93%.The cost of insuring Spanish government debt against default using credit-default swaps, or CDS, rose to an all-time high. Massive Jump in Bank of Spain Borrowing from ECB Inquiring minds are digging into Consolidated Balance Sheet of the ECB and by the Bank of Spain, searching for clues about the LTRO program for the entire Eurozone and also for Spain in isolation. Please consider Spain.

Elaborating on this theme, this post shows at a high level why the Greek issues have ripple effects on the other side of tthe world - in fact in all countries will low deposits and savings... by xavier_ May 7

In any case the euro zone is at a cross road. This crisis shows that it should either integrate further eco policies or... by wallen May 6

Difficult to say. The drama for Greece is that it can't depreciate neither leave the euro and default would not help that much (they still have 8-10% primary deficit). Germany and France have ok level of debt (at least for now). More importantly they are more "protected" than Greece because if they were in danger the ECB would depreciate the euro thus giving some breading space. Actually, if Italy or Spain enter the dance that's maybe what the ECB will do. by wallen May 6

True, and with economies like Germany and France in the mix, how is the ECB supposed to respond to current levels of sovereign debt? by jeason May 6

In a way it's normal, that's EU integration at work... but it shows the domino effect if one of them defaults. by wallen May 5