Disruptive technologies: Advances that will transform life, business, and the global economy 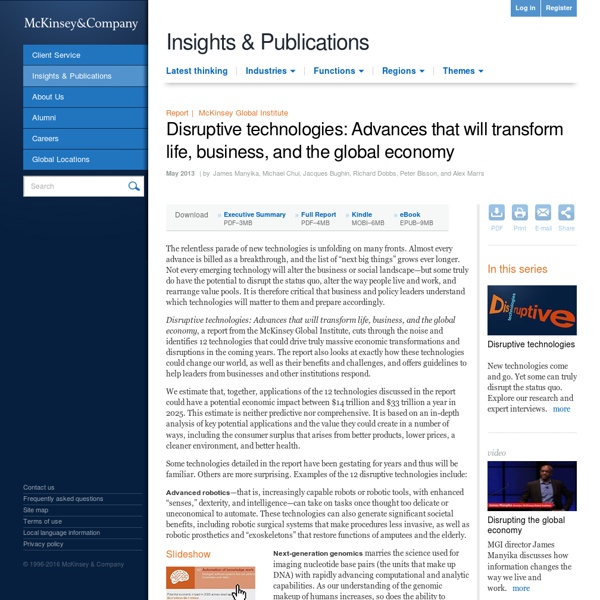 The relentless parade of new technologies is unfolding on many fronts. Almost every advance is billed as a breakthrough, and the list of “next big things” grows ever longer. Not every emerging technology will alter the business or social landscape—but some truly do have the potential to disrupt the status quo, alter the way people live and work, and rearrange value pools. It is therefore critical that business and policy leaders understand which technologies will matter to them and prepare accordingly. Disruptive technologies: Advances that will transform life, business, and the global economy, a report from the McKinsey Global Institute, cuts through the noise and identifies 12 technologies that could drive truly massive economic transformations and disruptions in the coming years. The report also looks at exactly how these technologies could change our world, as well as their benefits and challenges, and offers guidelines to help leaders from businesses and other institutions respond.

Big Data Meets Trough Of Disillusionment: Gartner Gartner says cloud, in-memory databases are headed into Hype Cycle "trough of disillusionment." Productivity expected within two to five years. Cloud computing and in-memory databases, two darlings of the big data movement, have passed the "peak of inflated expectations" and are headed into the "trough of disillusionment," according to Gartner's Hype Cycle for Big Data, 2013. Hype Cycles are Gartner's way of communicating the degree of hyperbole versus productivity associated with emerging technologies, with the peak and trough being followed by a "slope of enlightenment" and progressing to "plateau or productivity" as technologies mature. Kurzweil: Brains will extend to the cloud News By Johanna Ambrosio October 3, 2012 09:21 AM ET Computerworld - SANTA CLARA, Calif. - Human brains will someday extend into the cloud, futurist and computer pioneer Ray Kurzweil predicted at the DEMO conference here on Tuesday.

Why We’re in a New Gilded Age by Paul Krugman Capital in the Twenty-First Century by Thomas Piketty, translated from the French by Arthur Goldhammer Belknap Press/Harvard University Press, 685 pp., $39.95 Thomas Piketty, professor at the Paris School of Economics, isn’t a household name, although that may change with the English-language publication of his magnificent, sweeping meditation on inequality, Capital in the Twenty-First Century. Social innovation Social innovation is one of those phrases that is in danger of becoming nearly meaningless due to its overuse, and use in such a wide variety of applications. Today, most businesses want to have some claim on the idea that they’re doing something good, and most nonprofits want to be able to say that they’re moving beyond old models of charity and bringing something more innovative to their work. But what’s an actual definition of social innovation? That’s harder to come by. And without a definition, it’s hard to point at who is doing it well and who is doing it badly. At the 2011 Social Innovation Summit, PwC convened a variety of leaders in the field--including Charles Best from Donors Choose; Rahul Raj, Walmart.com’s director of sustainability; and Nancy Lublin, CEO of DoSomething.org--responded to the question: "What is social innovation?"

Intel Readies Laser Chip Business Intel came to dominate computing by consistently beating others at packing transistors ever more densely onto chips for desktop computers and servers. Today, even as the PC market shrinks and the giant company struggles to convince phone and tablet makers to use its chips, Intel spends $10.1 billion on research annually. Justin Rattner, who has been the company’s CTO, recently met with Tom Simonite, MIT Technology Review’s senior IT editor, to argue that this investment will help Intel’s mobile chips overtake those of its competitors and create new businesses. Last Thursday, Rattner announced he was stepping down as Intel’s CTO to take personal leave. He plans to return to the company in a different position.

SAP Shares Analytics Vision, Lumira, BI 4.2 Details at ASUG’s SABOC Event SAP offered new product information and key BusinessObjects roadmap details—covering BI suite consolidation, HANA tie-ins, BI 4.2 and Lumira enhancements—during the first day of ASUG’s SAP Analytics & BusinessObjects Conference in Ft. Worth, Tex. Steve Lucas, SAP’s global president platform solutions, kicked off his keynote address to more than 1,000 attendees by stating that he was here to “talk to you about great software.” Lucas presented SAP’s analytics vision, which was based on enterprise BI (with BusinessObjects at the center), agile visualization (Lumira) and predictive technologies (Predictive Analytics, with KXEN software folded in as well). Simplification of the BusinessObjects Suite is one key piece of the executing SAP’s strategy. “We know in the BusinessObjects enterprise suite that there are way too many clients,” Lucas told the crowd.

Sensors Are About To Disrupt Your Industry Wireless sensors are starting to unleash a wave of disruptive innovation that will bring with it immense entrepreneurial opportunities. There will be more wireless sensors in our world--by far--than there are smartphones, dumb phones, tablets, laptops and PCs combined. Billions upon billions today--and trillions tomorrow. They will give us superhuman senses: to see "through" walls, to "hear" sounds many miles away, to "know" things we never could have known before. No matter the size of your company, the ability to look at this new sensor-enabled world through the eyes of an entrepreneur is the price of admission. What Role Does Technology Play in Record Levels of Income Inequality? The signs of the gap—really, a chasm—between the poor and the super-rich are hard to miss in Silicon Valley. On a bustling morning in downtown Palo Alto, the center of today’s technology boom, apparently homeless people and their meager belongings occupy almost every available public bench. Twenty minutes away in San Jose, the largest city in the Valley, a camp of homeless people known as the Jungle—reputed to be the largest in the country—has taken root along a creek within walking distance of Adobe’s headquarters and the gleaming, ultramodern city hall. The homeless are the most visible signs of poverty in the region. But the numbers back up first impressions.