Scott Ludlam's Top Five Tips On Dodging Tomorrow's Data Retention Laws - New Matilda. With data retention laws about to kick in, New Matilda speaks to its major parliamentary opponent about what it means for online freedoms and how to beat the system. 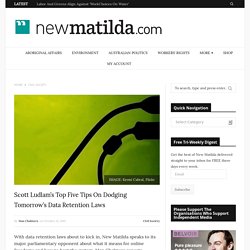 Max Chalmers reports. With Parliament resuming, Senator Scott Ludlam is back in Canberra today, primed for a week that will see legislation he fought to the bitter end finally take effect. From tomorrow, companies that provide your phone and internet services will be required by law to keep records of a range of your activities for two years, and provide them to various government agencies and staff without a warrant. The laws garnered a huge response from civil and online rights groups, with Ludlam becoming the parliamentary face of a spirited campaign against the changes, an effort torpedoed by the bipartisan consensus of Labor and the Coalition. “I think the first thing to note is that there is nothing illegal about circumventing data retention,” he says. That would be this interview. 1. 2. 3. 4. 5.

Majority of ISPs not ready for metadata laws that come into force today. Updated The vast majority of Australian internet service providers (ISPs) are not ready to start collecting and storing metadata as required under the country's data retention laws which come into effect today. 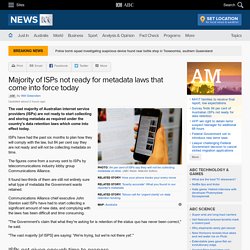 ISPs have had the past six months to plan how they will comply with the law, but 84 per cent say they are not ready and will not be collecting metadata on time. The figures come from a survey sent to ISPs by telecommunications industry lobby group Communications Alliance. It found two-thirds of them are still not entirely sure what type of metadata the Government wants retained. Communications Alliance chief executive John Stanton said ISPs have had to start collecting a significant amount of new data, and complying with the laws has been difficult and time consuming. "The Government's claim that what they're asking for is retention of the status quo has never been correct," he said. "The vast majority [of ISPS] are saying: 'We're trying, but we're not there yet'. 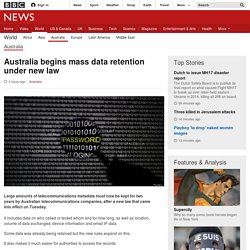 It includes data on who called or texted whom and for how long, as well as location, volume of data exchanged, device information and email IP data. Some data was already being retained but the new rules expand on this. It also makes it much easier for authorities to access the records. The new law has caused heated debate among Australians with some justifying the expanded data retention and others pointing out flaws in the plan.

Why was it implemented? The bill was introduced to the Australian parliament when current prime minister, Malcolm Turnbull, was communications minister. He called it "critical" for security agencies and law enforcement, citing investigations into domestic terrorism. Image copyright EPA What does it cover? Image copyright @snowden What are the concerns? Facebook. Data retention and mandatory data breach notification legislation. Australians' rights and freedom to speak out under threat, warns UN official. Important rights and freedoms are at risk of being “chipped away” in Australia, the United Nations special rapporteur for freedom of expression has warned. 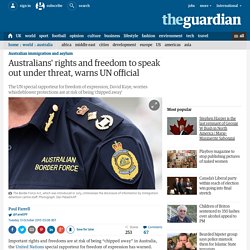 In an interview with Guardian Australia, David Kaye said laws restricting reporting on asylum seeker policies were “a real threat” to sources and whistleblowers. “You see in Australia the restrictions on sources and reporters who might want to report about the migrant detention situation,” Kaye said. “And there might be some situations, perhaps based on privacy, where some information should not be released, and the restrictions on the disclosure might be legitimate.

“But blanket restrictions on an area of policy that is really of great importance to the public, I think that’s a real threat to sources. It’s also a threat to whistleblowers.” Kaye said Australia had some strong protections, but there was growing concern about government overreach. “Those kinds of threats we’re definitely mindful of. Data creation regime or a data retention regime? - MsLods.