Imperatives in Schools Funding: Equity sustainability and achiev. Theconversation. The Conversation is fact-checking claims made on Q&A, broadcast Mondays on the ABC at 9:35pm. 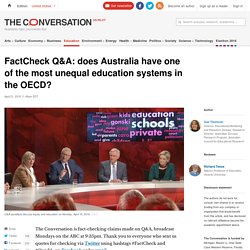 Is that right? Checking the source When asked for sources to support her assertion, Caro referred The Conversation to a 2015 report published by the Australian Council of Educational Research. the general relationship between the overall level of schools’ educational resources and the resources gap between socioeconomically advantaged and disadvantaged schools. High Court writ sought to challenge Australian governments acting as a corporation registered in the US. Michael Anderson Michael Anderson Goodooga, northwest NSW, 25 December 2010. 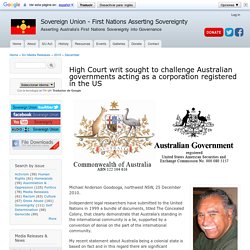 Independent legal researchers have submitted to the United Nations in 1999 a bundle of documents, titled The Concealed Colony, that clearly demonstrate that Australia's standing in the international community is a lie, supported by a convention of denial on the part of the international community. Aboriginal languages to become new HSC subject. Walgett students perform a reconciliation dance. 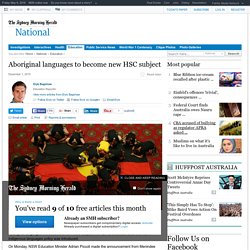 The new languages course will ''help maintain a critical part of Aboriginal cultures.'' Photo: Peter Rae Like SMH Student Aboriginal languages will become a new HSC subject from 2016, a decade after the NSW indigenous languages policy was introduced. On Monday, NSW Education Minister Adrian Piccoli made the announcement from Menindee Central School in the state's west. The foul truths of Anzac Day. Healthy News and Information. We get a LOT of bugs in Florida and using citronella oil in a mason jar isn’t some “new thing”. 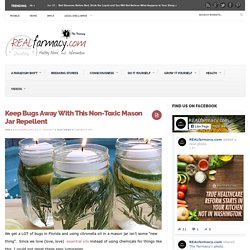 Since we love (love, love) essential oils instead of using chemicals for things like this, I could not resist these easy luminaries. I love that they can help to ward off the bugs and they are just so beautiful as well! Supplies You Need: Doris Pilkington Garimara obituary; &apos;Rabbit Proof-Fence&apos; author. When she was 4, Doris Pilkington Garimara was uprooted from her home in western Australia and sent to a camp for "half-caste" aboriginals, where she grew up believing she had been abandoned and forgotten by her mother. 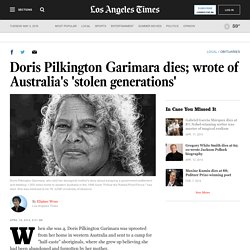 Decades passed before she learned the full story – one that would not only answer painful questions about her past but help Australians understand one of the ugliest chapters in theirs. Pilkington Garimara and her mother belonged to "the stolen generations"—the estimated 100,000 children of mixed aboriginal and white ancestry who by government edict were snatched from their homes and reared in desolate settlements. By separating them from their darker-skinned relatives, the policy aimed to assimilate them into white society. The forced removals occurred through most of the last century, ending in the 1970s but kept hidden far longer, in part because those who had been the targets accepted what the government told them: that aboriginal people were dirty and evil. Australia, exceptional in its brutality. The 19 July law caused Australia to be seen, internationally, as a nation that does not respect human rights. 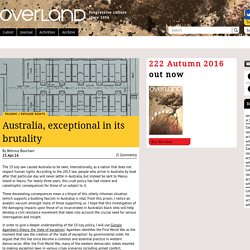 According to the 2013 law, people who arrive in Australia by boat after that particular day will never settle in Australia, but instead be sent to Manus Island or Nauru. For nearly three years, this cruel policy has had violent and catastrophic consequences for those of us subject to it. These devastating consequences mean a critique of this utterly inhuman situation (which supports a budding fascism in Australia) is vital. NT prisons 'aren't necessarily pleasant places', Minister says, as human rights lawyer condemns hooding of 17yo detainee. Updated An international human rights lawyer has described the restraint and hooding of a 17-year-old in the care of the NT Department of Correctional Services as "appallingly inhumane". 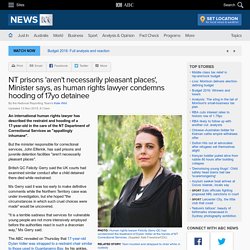 But the minister responsible for correctional services, John Elferink, has said prisons and juvenile detention facilities "aren't necessarily pleasant places". British QC Felicity Gerry said the UK courts had examined similar conduct after a child detained there died while restrained. Ms Gerry said it was too early to make definitive comments while the Northern Territory case was under investigation, but she hoped "the circumstances in which such cruel choices were made" would be uncovered. It's an Honour - Symbols - Gemstone. Boulder opal from Quilpie, Qld showing the magnificent colours found Opal from Lightning Ridge, NSW. 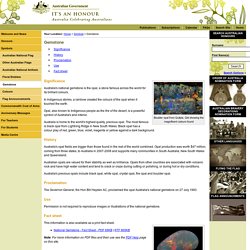 Public servants told to pay the office power bills. The ABS is keen to use the work-from-home arrangements to reduce the amount of costly office space it occupies around Australia, Photo: istock photos Hundreds of Bureau of Statistics public servants are to be sent home with a laptop as the bureau pursues a plan to provide desks for only 80 per cent of its workforce. 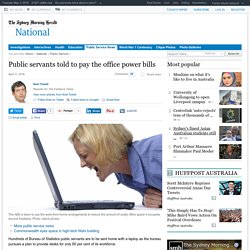 But there's a catch. The "teleworking agreement" has a clause forcing workers to pay all the costs of their arrangement including power, phone, internet, water and gas. Food security an issue in western Sydney, local advocates say. Posted Western Sydney has an issue with food security as thousands of people are unable feed their families adequately, food and health advocates say. 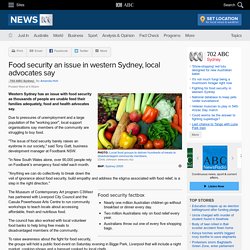 Due to pressures of unemployment and a large population of the "working poor", local support organisations say members of the community are struggling to buy food. "The issue of food security barely raises an eyebrow in our society," said Tony Gatt, business development manager at Foodbank NSW. "In New South Wales alone, over 90,000 people rely on Foodbank's emergency food relief each month. "Anything we can do collectively to break down the veil of ignorance about food security, build empathy and address the stigma associated with food relief, is a step in the right direction.

" 'Project Mastermind': Colgate colluded with rivals and Woolworths to rip you off. Loaded: 0% Progress: 0% Colgate fined $18 million for collusion Colgate-Palmolive is slammed with the equal third biggest penalty for cartel conduct in Australian history. Vision courtesy Seven News Melbourne. Using Aussie slang makes you more likeable - RN Drive. Taxpayers charged $6 million for Immigration Department telemovie. Loaded: 0% Progress: 0% Immigration goes Hollywood to stop asylum seekers A movie costing $5.9 million has been produced by the Federal Government to deter asylum seekers coming to Australia. The Immigration Department has made a $6 million telemovie to deter asylum seekers from coming to Australia – eclipsing the budgets of Priscilla Queen of the Desert, The Castle and Wolf Creek combined.

The taxpayer-funded drama called The Journey made its debut on Afghanistan television on Friday. Government tender documents reveal the Department of Immigration and Border protection paid the Sydney-based Put It Out There Pictures $4.34 million to produce the movie. Fuck Your Constitutional Recognition, I Want a Treaty. Nayuka Gorrie. Image by Kiernan Ironfield. Dear white Australia, My name is Nayuka, and up until a few years ago I supported constitutional recognition. I really believed in it, probably for the same reasons you might. Elderly Indigenous 'starving' on food program. Elderly people on an aged care food program in the Utopia region of central Australia are starving, says Rosalie Kunoth-Monks, 2015's Northern Territory Australian of the Year. She said on Friday that elderly people in the 15 remote outstations that make up the region, 260km north-east of Alice Springs, have not been receiving regular daily meals as expected through the Barkly Shire Council's aged care program.

She alleged that 'the whole community including children and the elderly go without food, often on a daily basis' and that one elderly man with end-stage Parkinson's disease had received a package containing two packets of 'horrible-looking' mince meat and white bread which was 'like eating paper' with no nutritional value, while two neighbouring elderly women received nothing. Ms Kunoth-Monks characterised the packages as 'the bare minimum to sustain life'.

KYD No.25 teaser: ‘The Hungry Lucky Country’ — Kill Your Darlings Journal. Millions of tonnes of food are wasted each year in Australia, and yet many struggle to afford to eat. In the second teaser from KYD issue 25, Sarah Coles meets those seeking to change the ways we think about feeding our communities. When I ask Patrick Lawrence what he did before becoming the Director of Humanitarian Services at the Asylum Seeker Resource Centre (ASRC), his answer floors me: ‘Classical piano.’ I was expecting ‘Masters in International Development’ or ‘Engineers Without Borders’.

Ten years ago Patrick returned to Melbourne after completing a masters degree in classical piano at the University of Cincinnati. ‘I still wanted to make music but I found out about this place in St Kilda that was detoxing people off heroin on mattresses on the floor and they needed volunteers. This man beat Centrelink's system and he says you can too. The Hon. Sussan Ley MP: Health clinic for Sydney's homeless set to close after funding cut.

A health clinic for the homeless in Sydney is set to close due to a funding shortfall after more than 40 years in operation. Government negligence and Australia's water crisis. In a world heading for a major water crisis, CSIRO cuts to water science will guarantee Australia cannot manage its most valuable resource into the future, says Bruce Haigh. Street Swags founder develops mobile cabins to help Australia's homeless. Posted A new project to provide cabins for those less fortunate is being touted as the key to tackling the homelessness throughout Australia. Unliveable Melbourne. At North Melbourne she saw a few straggling hopefuls wandering the platforms. It was a good place to wait for a train: three lines (or five, if you believed the driver) passed through here. What Australia can learn from PNG. The recent Lowy Institute PNG New Voices Conference was a much-needed shock to the complacency I have become attuned to as a member of Australia's international policy community.

It was the best Lowy Institute conference I have ever attended. In fact it was the best conference I have ever attended full stop. COMMONWEALTH OF AUSTRALIA CONSTITUTION ACT. If you're worried about privacy, you should worry about the 2016 census - The Drum. Malcolm Turnbull Escalates His War on the Poor And Unemployed. ANALYSIS: Unemployed and underemployed Australians can be issued with on-the-spot fines by privately owned job agencies under a tough new Government proposal, writes Owen Bennett. Later this month the Turnbull Government will be asking the Senate to support one of the most devastating attacks launched against poor and vulnerable Australians in recent memory. The Bill – entitled Social Security Legislation Amendment (Further Strengthening Job Seeker Compliance) Bill 2015 – proposes to give privately run job agencies unprecedented new powers to financially penalise unemployed and underemployed Australians.

More stories from families adversely affected by No Jab No Pay/Play. Thank you to everyone who has shared their impact statements with the AVN. As we did yesterday, we will continue to publish your stories on this website. Sex for rent on the Gold Coast: ‘take care of my more intimate needs’ Let's stop neglecting the unique struggles of Aboriginal women. Five reasons Australia should care about Women's History Month. Sunshine Coast Community tackles disposable society. Calls for Royal Commission into bank treatment of farmers. Income distribution: Australia's highest earners think they are battlers.

Hundreds of Vocation private training college graduates forced to hand back qualifications. Rupert Murdoch's US empire siphons $4.5b from Australian business virtually tax-free. Surf's Up for Dolphins in Australia. Use of cage for boy with autism at Canberra school prompts call for national education standard. Centrelinks Secret Breaching Triggered Death Toll. Theconversation. Punishment dished out to unemployed is on par with our treatment of refugees. Talking Point: Trading our health for exports. Human Rights Watch: Australia’s record criticised. Invasion Day - Lest We Forget 1788 - WATCH FULL VID.