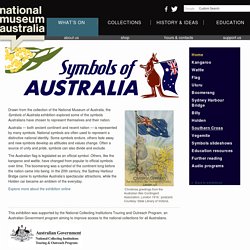 Courtesy: State Library of Victoria. Drawn from the collection of the National Museum of Australia, the Symbols of Australia exhibition explored some of the symbols Australians have chosen to represent themselves and their nation. Australia — both ancient continent and recent nation — is represented by many symbols. National symbols are often used to represent a distinctive national identity. Some symbols endure, others fade away and new symbols develop as attitudes and values change. The Australian flag is legislated as an official symbol. Explore more about the exhibition online This exhibition was supported by the National Collecting Institutions Touring and Outreach Program, an Australian Government program aiming to improve access to the national collections for all Australians. Amanda.dd.com. [an error occurred while processing this directive] Take a seat by the bank of our Billabong. 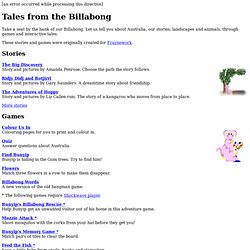 Let us tell you about Australia, our stories, landscapes and animals, through games and interactive tales. These stories and games were originally created for Fraynework. Stories The Big Discovery Story and pictures by Amanda Penrose. Ridjy Didj and Botjirri Story and pictures by Gary Saunders. The Adventures of Hoppy Story and pictures by Liz Callen rsm. Dust Echoes: Download Study Guides. 15995.pdf. Australia - Online English Word Search Puzzle. Australia Day - Interactive ESL Crossword Puzzle. Short ESL Reading Passage - Panda Article. ESL Reading Passage 28 - Panda Bear The answers to the following exercise will appear in the box at the bottom of the page when you click on "Submit Worksheet". 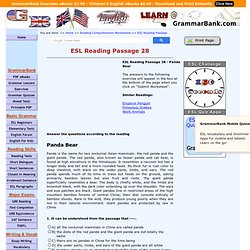 Similar Readings: Emperor PenguinPoisonous SnakesWork Animals Answer the questions according to the reading Panda is the name for two nocturnal Asian mammals: the red panda and the giant panda. Australia Day. Uluru Uproar: 21/07/2009, Behind the News. It's the rock in the middle of the desert that attracts 350,000 people each year, but soon those visiting Uluru, in the centre of Australia, might not get to see as much of it as they'd like. 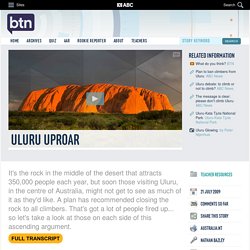 A plan has recommended closing the rock to all climbers. That's got a lot of people fired up... so let's take a look at those on each side of this ascending argument. It's known as the heart of Australia - a 348m high sandstone outcrop in the middle of the desert, that seems to change colour as the outback sun moves across its ochre face. With a stunning landscape like this, it's no wonder hundreds of thousands of visitors trek out to the red centre, near the exact centre of Australia, to take a look. But many don't just enjoy the view from the bottom. The question of whether to climb or not to climb Uluru has left this rock in a pretty hard place.

But in the past, the local indigenous people didn't get any say in how it was run, so climbers were allowed. So what do you reckon? Flag Day: 09/09/2014, Behind the News. On the 3rd of September, 1901, the Australian national flag was raised for the first time. 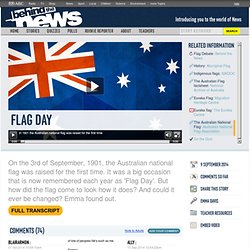 It was a big occasion that is now remembered each year as 'Flag Day'. But how did the flag come to look how it does? And could it ever be changed? Emma found out. EMMA DAVIS, REPORTING: We fly it, parade it, wave it and wear it, both here and overseas. Well back in 1901 when Australia became a federation, Prime Minister Sir Edmund Barton announced a competition to design a brand new flag for this brand new nation! But what does the design of our flag represent? But now the flag is 113 years old, some people are wondering if it's time for a revamp! The Union Jack is a combination of the flag of England, Saint Patrick's Saltire from Northern Ireland and the flag of Scotland.