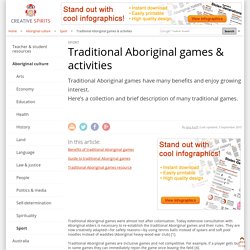 Benefits of bringing traditional Indigenous games back to life include Many Aboriginal people see the traditional Indigenous games as a strong indicator that their culture can survive. Traditional Aboriginal games were not only played by children. Battendi. Australian swagman costume. What you need 1 x checked flannel shirt1 x pair of old brown pants1 x red neck kerchief1 x towel (to roll up for a swag)1 x billy or water canteen1 x broad brimmed hat6-10 corks (or beads if you can’t locate corks)string Activity Make your swagman hat by attaching corks or beads to the brim of the hat with string. 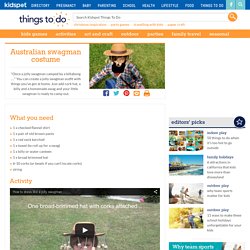 These will help keep the flies off your “swaggie’s” face while he’s roaming the countryside. Make a cork hat here Dress in shirts and pants, add the red kerchief around the neck. Make a swag by rolling up a towel or blanket. Make an Aussie beach swag here Draw on a bushy beard or you can make one out of brown or black felt. Now go catch that jumbuck for tucker. Notes: The “Waltzing Matilda” in Banjo Patterson’s lyrics refers to the swaying motion of swagmen as they roamed the countryside with their swags swaying from side to side on their backs.The leather thongs tied below the knee of a swagman’s trousers are ‘bowyangs.’ Sydney Opera House collage craft. 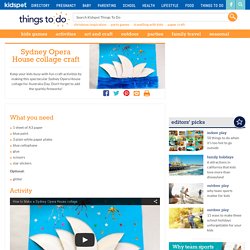 Cut five crescent shapes out of the three paper plates (see video). Arrange the crescents to resemble the Opera House. Lay down the outer shells first then work your way to the middle. Place a ruler along the line where the water level would be. Timeline ‐ Australia Day. Before 1770 - Aboriginal peoples had been living for more than 40 000 years on the continent we now know as Australia. 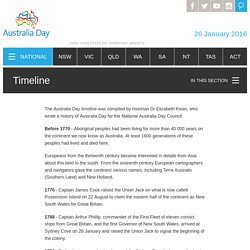 At least 1600 generations of these peoples had lived and died here. Europeans from the thirteenth century became interested in details from Asia about this land to the south. From the sixteenth century European cartographers and navigators gave the continent various names, including Terra Australis (Southern Land) and New Holland. 1770 - Captain James Cook raised the Union Jack on what is now called Possession Island on 22 August to claim the eastern half of the continent as New South Wales for Great Britain. 1788 - Captain Arthur Phillip, commander of the First Fleet of eleven convict ships from Great Britain, and the first Governor of New South Wales, arrived at Sydney Cove on 26 January and raised the Union Jack to signal the beginning of the colony. 1818 - Governor Macquarie acknowledged the day officially as a public holiday on the thirtieth anniversary. 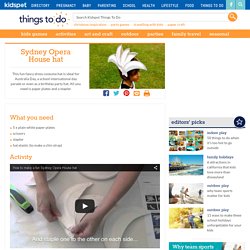 Pair up 10 crescents so you have five pairs with the plates facing inwards. Staple the top point of each pair and then staple about 5cm along the circumference of each pair. Open out each pair (where it’s not stapled) and place one pair over the top of another, with the stapled point up. Lay them in Sydney Opera House formation (remember that two of the sails face backwards!) Attach some elastic as a chin strap.