Backpacktassie.com. TAS camping spots with hot showers info please - Tasmania Forum. Lists 26 Showers. Many roadhouses have showers; some for a fee of around $3 and others free. 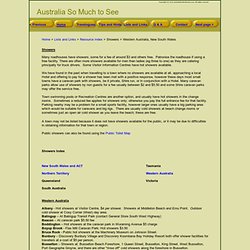 Patronise the roadhouse if using a free facility. There are often more showers available for men than ladies (eg three to one) as they are catering principally for truck drivers. Some Visitor Information Centres have hot showers available. We have found in the past when travelling to a town where no showers are available at all, approaching a local Hotel and offering to pay for a shower has been met with a positive response, however these days most small towns have a caravan park with showers, be it private, Shire run, or in conjunction with a Hotel. Many caravan parks allow use of showers by non guests for a fee usually between $2 and $5.50 and some Shire caravan parks may offer the service free.

Town swimming pools or Recreation Centres are another option, and usually have hot showers in the change rooms. Public showers can also be found using the Public Toilet Map - Hot showers at Visitor Centre, $4 per shower. LINC Tasmania Online - Computers + internet. You can use LINC Tasmania's computers to browse the catalogue, access eresources and search the Internet. 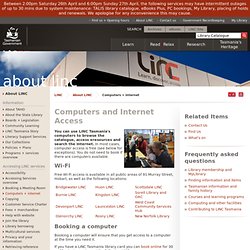 In most cases, computer access is free (see below for exceptions). You do not need to book if there are computers available. Wi-Fi Free Wi-Fi access is available in all public areas of 91 Murray Street, Hobart, as well as the following locations: Driving the Great Ocean Road » Pommie Travels. I’ve driven the Great Ocean Road twice, and it’s still one of my favourite parts of Australia. 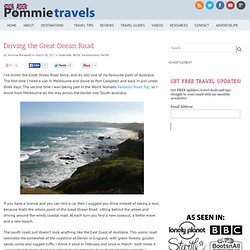 The first time I hired a van in Melbourne and drove to Port Campbell and back in just under three days. The second time I was taking part in the World Nomads Vantastic Road Trip, so I drove from Melbourne all the way across the border into South Australia. If you have a license and you can rent a car then I suggest you drive instead of taking a tour, because that’s the whole point of the Great Ocean Road- sitting behind the wheel and driving around the windy coastal road.

At each turn you find a new lookout, a better wave and a new beach. The south coast just doesn’t look anything like the East Coast of Australia. The “Great Ocean Road” doesn’t deserve such a flat adjective as ‘great’. The route: Melbourne Tullamarine Airport. In this section you will find traveller airport reviews as well as our Melbourne Tullamarine Airport Guide with info on WiFi, lounges, facilities and services....and yes, even the names of some airport hotels in case you decide that sleeping in the airport is not for you! 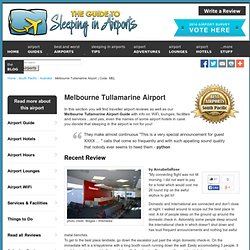 They make almost continuous "This is a very special announcement for guest XXXX ... " calls that come so frequently and with such appalling sound quality that nobody ever seems to heed them - python Recent Review photo credit: Bidgee / Wikimedia by AnnabellaRose "My connecting flight was not till morning. I did not want to pay for a hotel which would cost me 26 round trip on the awful skybus to get to! Domestic and International are connected and don't close at night. TravellingTwo: Bicycle Touring Around The World. We created this map to show free or very low cost camping areas in Tasmania. 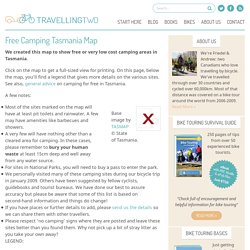 Click on the map to get a full-sized view for printing. On this page, below the map, you’ll find a legend that gives more details on the various sites. See also, general advice on camping for free in Tasmania. A few notes: Base image by TASMAP © State of Tasmania. Most of the sites marked on the map will have at least pit toilets and rainwater. A – Gowrie Park (O’Neills Forest Park, nice setting) OR Mt. Tasmania travel guide. Tasmania is Australia's only island state. 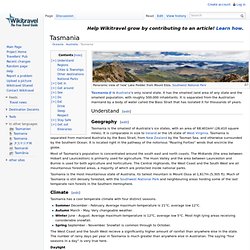 It has the smallest land area of any state and the smallest population, with roughly 500,000 inhabitants. It is separated from the Australian mainland by a body of water called the Bass Strait that has isolated it for thousands of years. Understand[edit] Geography[edit] Tasmania is the smallest of Australia's six states, with an area of 68,401km² (26,410 square miles). Most of Tasmania's population is concentrated around the south east and north coasts.

Tasmania is the most mountainous state of Australia, its tallest mountain is Mount Ossa at 1,617m (5,305 ft). Climate[edit] Tasmania has a cool temperate climate with four distinct seasons. Summer December - February. The West Coast and the South West recieve a significantly higher amount of rainfall than anywhere else in the state. Daylight Summer: approximately 15 hours of daylight. (05:30-20:50) Winter: approximately 9 hours of daylight. (07:40-16:40) History[edit] Economy[edit]