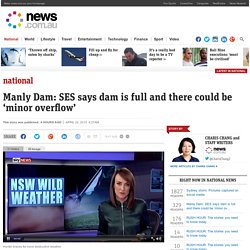 Featured Video More videos available at the News video hub NBA: The Cleveland Cavaliers took their time to gel in game two against the Boston Celtics but when they did they took to the air. New South Wales's residents have awoken to a second day of wild weather. Russian Prime Minister Dmitri Medvedev stated in Moscow, Tuesday, that foreign pressure on Russia's economy was due to the "main political decision of last year" to return Crimea to Russia. Ninty-three-year-old former Nazi Oskar Groning, a guard of the SS who worked in the Auschwitz concentration camp and who has been dubbed the 'bookkeeper of Auschwitz', was seen waiting in the sunshine outside court before going on trial in the German city of Luneburg, Tuesday. Reporter Wes Hoskins discovers just how tough you need to be to become a Navy Seal There are fears for residents who live nearby the Manly Dam. Golf Parade in Manly. Medicare review 'not a savings exercise'

Health Minister Sussan Ley insists a wide-ranging review of Medicare will not be a savings exercise. 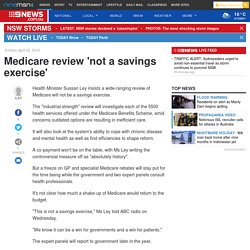 The "industrial strength" review will investigate each of the 5500 health services offered under the Medicare Benefits Scheme, amid concerns outdated options are resulting in inefficient care. It will also look at the system's ability to cope with chronic disease and mental health as well as find efficiencies to shape reform. A co-payment won't be on the table, with Ms Ley writing the controversial measure off as "absolutely history".

But a freeze on GP and specialist Medicare rebates will stay put for the time being while the government and two expert panels consult health professionals. It's not clear how much a shake-up of Medicare would return to the budget. "This is not a savings exercise," Ms Ley told ABC radio on Wednesday. "We know it can be a win for governments and a win for patients. " 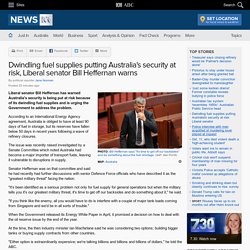 According to an International Energy Agency agreement, Australia is obliged to have at least 90 days of fuel in storage, but its reserves have fallen below 50 days in recent years following a wave of refinery closures. The issue was recently raised investigated by a Senate Committee which noted Australia had become a major importer of transport fuels, leaving it vulnerable to disruptions in supply. Senator Heffernan was on that committee and said he had recently had further discussions with senior Defence Force officials who have described it as the "greatest military threat" facing the nation. "If you think like the enemy, all you would have to do is interfere with a couple of major tank loads coming from Singapore and we'd be in all sorts of trouble.

" NYT Local Bureau. The New York Times’ global push for subscribers, supported by the opening of a small bureau in Australia, is likely to cause a few more worried faces in the already fractured local news market. 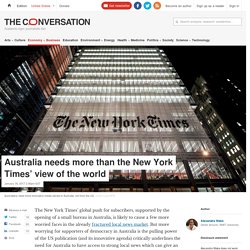 But more worrying for supporters of democracy in Australia is the pulling power of the US publication (and its innovative agenda) critically underlines the need for Australia to have access to strong local news which can give an Australian “take” on local and world events. The Australian bureau is just one part of The New York Times’ US$50 million, three-year drive to expand globally and to grow its paying subscriber base outside the United States. Employees were told in a memo reported in the Times: Because our digital report is still designed and produced mainly for a US audience, we have not come close to realizing our potential to attract readers outside our home market… We are confident this will be a down payment on a new era of international growth for our company. Global media super brands. Wave! It's a flag for all Australians.

Australia has never had a truly national flag. 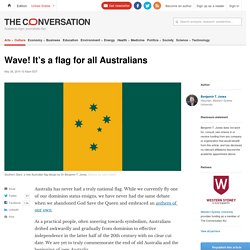 While we currently fly one of our dominion status ensigns, we have never had the same debate when we abandoned God Save the Queen and embraced an anthem of our own. As a practical people, often sneering towards symbolism, Australians drifted awkwardly and gradually from dominion to effective independence in the latter half of the 20th century with no clear cut date. We are yet to truly commemorate the end of old Australia and the beginning of new Australia. A new flag is needed but we must understand our transformative history to appreciate why.

Australian history is not linear but the tale of two separate societies with different values, standards and identities. Our first significant act of parliament was the Immigration Restriction Act and the broader White Australia Policy, designed to preserve our British character. In 1901, Australia did not become an independent country.