Full text: Apology to Aborigines. The following is the historic formal apology given to the Aboriginal people of Australia by Prime Minister Kevin Rudd on behalf of its parliament and government. 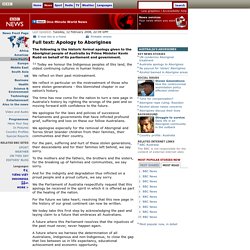 Today we honour the Indigenous peoples of this land, the oldest continuing cultures in human history. We reflect on their past mistreatment. We reflect in particular on the mistreatment of those who were stolen generations - this blemished chapter in our nation's history. The time has now come for the nation to turn a new page in Australia's history by righting the wrongs of the past and so moving forward with confidence to the future. We apologise for the laws and policies of successive Parliaments and governments that have inflicted profound grief, suffering and loss on these our fellow Australians. We apologise especially for the removal of Aboriginal and Torres Strait Islander children from their families, their communities and their country.

A future based on mutual respect, mutual resolve and mutual responsibility. HARRY'S WAR - 'Mates' trailer. Titles from the 2010s on ASO. 13 titles - sorted alphabetically or by year Animal Kingdom feature film – 2010 A nervous 17-year-old boy struggles to survive his scary new criminal family after the death of his mother. 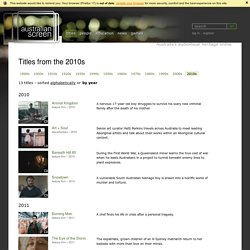 Art + Soul documentary – 2010 Senior art curator Hetti Perkins travels across Australia to meet leading Aboriginal artists and talk about their works within an Aboriginal cultural context. Beneath Hill 60 feature film – 2010 During the First World War, a Queensland miner learns the true cost of war when he leads Australians in a project to tunnel beneath enemy lines to plant explosives.

Snowtown feature film – 2010 A vulnerable South Australian teenage boy is drawn into a horrific world of murder and torture. Burning Man feature film – 2011 A chef finds his life in crisis after a personal tragedy. Shifting Sands – My Colour, Your Kind (1998) clip 2 on ASO. Two Men. Indigenous_read012_0801.pdf. The Stolen Generations’ Testimonies - Daniel Forrester. The National Indigenous Times Newspaper. - Home. In the lucky country of Australia apartheid is alive and kicking. The corridors of the Australian parliament are so white you squint. 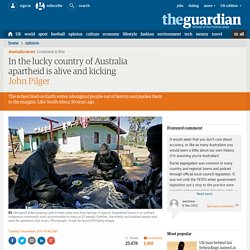 The sound is hushed; the smell is floor polish. The wooden floors shine so virtuously they reflect the cartoon portraits of prime ministers and rows of Aboriginal paintings, suspended on white walls, their blood and tears invisible. The parliament stands in Barton, a suburb of Canberra named after the first prime minister of Australia, Edmund Barton, who drew up the White Australia Policy in 1901. "The doctrine of the equality of man," said Barton, "was never intended to apply" to those not British and white-skinned.

Barton's concern was the Chinese, known as the yellow peril; he made no mention of the oldest, most enduring human presence on Earth: the first Australians. The town of Wilcannia, in New South Wales, is twice distinguished. Politicians in Canberra are among the wealthiest citizens. I drove into the red heart of central Australia and asked Dr Janelle Trees about the "old victim brigade". Another stolen generation: how Australia still wrecks Aboriginal families. Most Aboriginal families live on the edge. 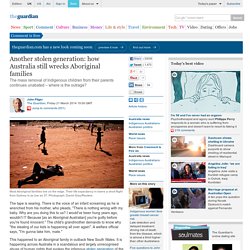 Their life expectancy in towns a short flight from Sydney is as low as 37. Photograph: David Gray/Reuters The tape is searing. There is the voice of an infant screaming as he is wrenched from his mother, who pleads, "There is nothing wrong with my baby. Why are you doing this to us? This happened to an Aboriginal family in outback New South Wales. Described by a chief protector of Aborigines as "breeding out the colour", the policy was known as assimilation. Assimilation remains Australian government policy in all but name. Today, the theft of Aboriginal children – including babies taken from the birth table – is now more widespread than at any time during the last century. 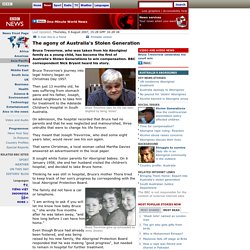 BBC correspondent Nick Bryant heard his story. Bruce Trevorrow's journey into legal history began on Christmas Day 1957. Then just 13 months old, he was suffering from stomach pains and his father, Joseph, asked neighbours to take him for treatment to the Adelaide Children's Hospital in South Australia. On admission, the hospital recorded that Bruce had no parents and that he was neglected and malnourished, three untruths that were to change his life forever. They meant that Joseph Trevorrow, who died some eight years later, would never see his son again. That same Christmas, a local woman called Martha Davies answered an advertisement in the local paper. It sought white foster parents for Aboriginal babies. The family did not have a car or telephone. Stories from the report. Aboriginal Spirituality. Aboriginal (Australian) Bringing them home: separation of Aboriginal and Torres Strait Islander children from their families.