The 9pm Urgent Hardware Refresh by Stilgherrian. A$5 + Reward approx C$5 Basic Tip My sincere thanks will go to you, MEDIA FREEDOM CITIZEN, for contributing to the continuing production of quality media in whatever way you can. 3 Chosen Est. 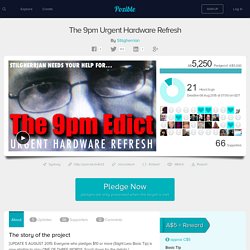 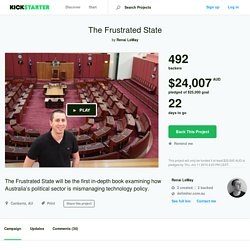 New technologies are flooding into Australia and revolutionising the way we live our everyday lives. Successfully managing this change has emerged as one of the biggest issues in our lifetimes. And Australia’s political leaders and policymakers are getting it completely wrong. The past decade of technology policy development and implementation by the political sector has been catastrophic for all concerned. The broadband sector is in chaotic disarray, following a decade of poisonous political warfare on how best to upgrade Telstra’s ageing copper network. And let’s not even get into the billions being wasted on failed government IT projects. It will also humbly offer a few basic suggestions to resolve the situation.

This Kickstarter strictly only covers the resources need to developed the book itself. 'No one should die penniless and alone': the victims of Britain's harsh welfare sanctions. We know that David Clapson was actively searching for work when he died because a pile of CVs he had just printed out was found a few metres from his body. 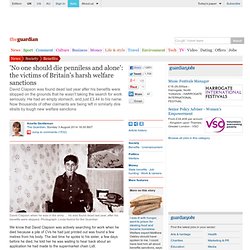 The last time he spoke to his sister, a few days before he died, he told her he was waiting to hear back about an application he had made to the supermarket chain Lidl. But officials at the Jobcentre believed he was not taking his search for work seriously enough, and early last July, they sanctioned him – cutting off his benefit payments entirely, as a punishment for his failure to attend two appointments. Clapson, 59, who had diabetes, died in his flat in Stevenage on 20 July 2013, from diabetic ketoacidosis (caused by an acute lack of insulin). When Gill Thompson, his younger sister, discovered his body, she found his electricity had been cut off (meaning that the fridge where he kept his insulin was no longer working).

Thompson describes her brother as very quiet and private; he was not someone who liked to ask for help. 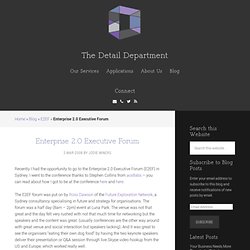 I went to the conference thanks to Stephen Collins from acidlabs – you can read about how I got to be at the conference here and here. The E2EF forum was put on by Ross Dawson of the Future Exploration Network, a Sydney consultancy specialising in future and strategy for organisations. The forum was a half day (8am – 2pm) event at Luna Park. The venue was not that great and the day felt very rushed with not that much time for networking but the speakers and the content was great. (usually conferences are the other way around with great venue and social interaction but speakers lacking).

The idea of the conference was to expose business executive types to the future of collaboration in the enterprise. The messages that I got from the day were briefly as follows, and I’ll expand on them further below: But lets start with what is Enterprise 2.0 (E2.0). This brings me to the topic of IT departments. Shifted HR.