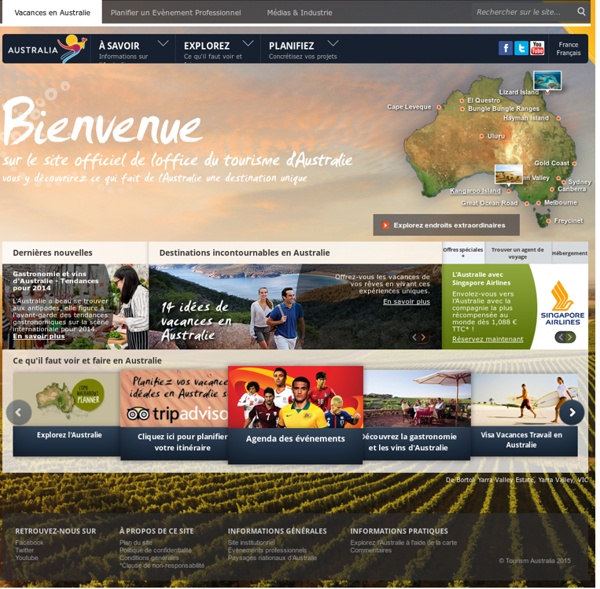 Australia Webquest 1. Complete the map and colour France in blue and Australia in red. - Which hemisphere is Australia in ? English-speaking countries: Australia The term "Down Under" comes from the fact that Australia is located in the southern hemisphere(half of the Earth), below many other countries on the globe. Overview Geography Australia, officially the Commonwealth of Australia, is a country in the Southern Hemisphere(half of the Earth) comprising the mainland of the Australian continent (the world's smallest), the island of Tasmania, and numerous smaller islands in the Indian and Pacific Oceans. Neighbouring countries include Indonesia, East Timor, and Papua New Guinea to the north, the Solomon Islands, Vanuatu, and New Caledonia to the northeast, and New Zealand to the southeast. Australia has six states—New South Wales, Queensland, South Australia, Tasmania, Victoria, and Western Australia—and two major mainland territories(a geographic area under control of a single governing entity such as state or municipality)—the Northern Territory and the Australian Capital Territory (ACT).

Australia: What’s in Store for the Broadband Market? By 2004, Australia had enjoyed an impressive 120 percent CAGR for the last three years in broadband subscribers. Momentum continued into this year, and we believe there remains significant room for continued growth. Forecasts indicate that the growth rate will slow to a feverish double digit figure of 16 percent for the next five years. This rate is impressive against our expectations for Western Europe and North America’s 14.5 percent and 10 percent respectively. The drivers for subscriber growth will stem from untapped demand both in cities and rural areas, where intensifying competitive pressure starts bringing prices lower. Overall, we believe the Australian market’s broadband penetration will reach almost 30 percent by YE2010, and almost 18 percent broadband revenue growth rate.

Significant increase of New Zealanders to Australia in last year A study compiled regarding the immigration of residents from Australia over the last twelve months has recently been published with the results somewhat shocking. There’s been a significant rise in Australian residents who have migrated to New Zealand over the past year, the rise is a staggering 40%! Data reveals that over 648,000 New Zealand natives now reside permanently in Australia, this is up from 470,000 before the year 2007 when the world saw the devastating financial recession. It has been proven that New Zealand has lost a staggering 12% of it’s citizens to sister country Australia, so what is enticing these persons in such a high volume?

Map Of Australia The map is divided into 43 individual selectable maps. In some cases for example with the Sydney Map, the maps can be zoomed in to give a closer more detailed scale. Detailed Map of Sydney Australia Maps covering all of Australia are available and a detailed Map of Sydney Australia is also available by zooming into Sydney Region of New South Wales. Australia Travel Notes Short URL: - National Anthem of Australia. Australia is so full of superlatives that the best way to appreciate them all is to get Down Under and see for yourself mate. Australia Travel Brochures. Quick Links New Zealand Travel Notes Short URL: - National Anthem of New Zealand. The Realm of New Zealand is made up of the North and South islands (separated by the narrow Cook Strait) and many smaller islands; including Stewart Island to the south of South Island. New Zealand Travel Brochures.