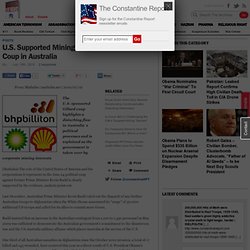 -sponsored Gillard coup highlights a disturbing flaw in Australia`s political processes and is explained as the government is taken over by corporate mining interests (Mathaba) The role of the United States of America and the corporations it represents in the June 24 political coup against former Prime Minister Kevin Rudd is clearly supported by the evidence, analysts point out. Murdoch editors told to 'kill Whitlam' in 1975. All smiles: Rupert Murdoch leaves News UK's London office this week. 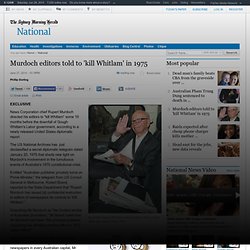 Photo: AFP News Corporation chief Rupert Murdoch directed his editors to "kill Whitlam" some 10 months before the downfall of Gough Whitlam's Labor government, according to a newly released United States diplomatic report. The US National Archives has just declassified a secret diplomatic telegram dated January 20, 1975 that sheds new light on Murdoch's involvement in the tumultuous events of Australia's 1975 constitutional crisis. Illustration: Ron Tandberg Entitled "Australian publisher privately turns on Prime Minister," the telegram from US Consul-General in Melbourne, Robert Brand, reported to the State Department that "Rupert Murdoch has issued [a] confidential instruction to editors of newspapers he controls to 'Kill Whitlam' ".

Advertisement Mr Brand's telegram makes it clear the words "kill Whitlam" were a political direction to News Limited newspapers and not a physical threat to the prime minister. [ ] Julian Assange officially launches campaign for Australian senate. On 25 July, Julian Assange, the embattled WikiLeaks founder who has been holed up in the Ecuadorean Embassy in London for over a year, formally announced the launch of his WikiLeaks Party. 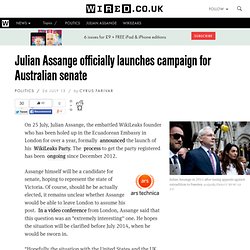 The process to get the party registered has been ongoing since December 2012. Assange himself will be a candidate for senate, hoping to represent the state of Victoria. Of course, should he be actually elected, it remains unclear whether Assange would be able to leave London to assume his post. In a video conference from London, Assange said that this question was an "extremely interesting'' one. He hopes the situation will be clarified before July 2014, when he would be sworn in. "Hopefully the situation with the United States and the UK has resolved by then, but if not, the senate is able to give a grace period of a couple of months and then another candidate from the WikiLeaks Party is able to take my place," he said. This story originally appeared on ars technica Image: acidpolly/Flickr/CC. WikiLeaks’ Assange Plans Bid for Australian Senate. 19th March 2012 By Rod McGuirk – Washington Times WikiLeaks founder Julian Assange plans to run for a seat in the Australian Senate in elections due next year despite being under virtual house arrest in England and facing sex crime allegations in Sweden, the group said Saturday. 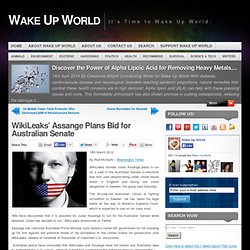 The 40-year-old Australian citizen is fighting extradition to Sweden. He has taken his legal battle all the way to Britain’s Supreme Court, which is expected to rule on his case soon. “We have discovered that it is possible for Julian Assange to run for the Australian Senate while detained. Assange has criticized Australian Prime Minister Julia Gillard’s center-left government for not standing up for him against the potential threat of his extradition to the United States for prosecution over WikiLeaks’ release of hundreds of thousands of classified U.S. documents. “If he gets on the roll, then he can stand as long as he’s solvent and not in jail and not insane,” Wanna said. Home. It's the debt, not the spending: why the budget is bleeding. Illustration: Matt Golding. 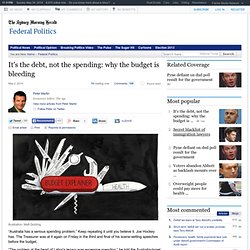 “Australia has a serious spending problem.” Keep repeating it until you believe it. Joe Hockey has. The Treasurer was at it again on Friday in the third and final of his scene-setting speeches before the budget. “The problem at the heart of Labor's legacy was excessive spending,” he told the Australia-Israel Chamber of Commerce . It’s a good line, but it isn’t true. Spending is running somewhat higher than it was when the Coalition was last in office, that’s all. Advertisement Australia has a big budget problem – certainly a big revenue problem - but it doesn’t yet have a spending problem. Treating Australia With Contempt By Francis Enden.

Treating Australia With Contempt By Francis Enden 04 December, 2010Countercurrents.org The Australian Labor Party (ALP) lost its majority in the Australian parliament in September this year, and had to cobble together a fragile coalition. 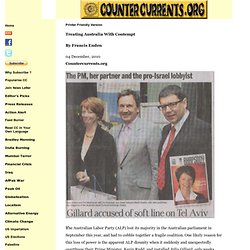 One likely reason for this loss of power is the apparent ALP disunity when it suddenly and unexpectedly overthrew their Prime Minister, Kevin Rudd, and installed Julia Gillard, only weeks before the national elections (1). To add to the suspicion surrounding this infighting, no convincing explanation was given for this foolhardy action.