Brisbane shelf-stacker secures key win against might of Coles, SDA. A Brisbane night-fill worker has won an important legal battle in a massive underpayment case against the combined might of Coles and one of the largest trade unions in Australia. 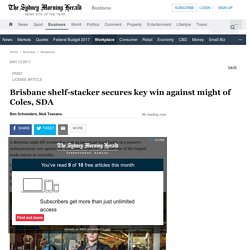 Coles worker Penny Vickers, who was representing herself, won the right for a full bench hearing in the Fair Work Commission against the arguments of high-powered lawyers from the company and the Shop, Distributive & Allied Employees (SDA). Her case is the latest attempt to unwind controversial deals struck by the politically influential SDA with major companies which have left workers out of pocket. A 12-month Fairfax Media investigation revealed how deals involving big business and the conservative SDA left more than 250,000 workers paid less than the award - the wages safety net - and is estimated to have saved those employers at least $300 million a year. In a landmark decision, the full bench of the Fair Work Commission found that the 2014 agreement failed the "better off overall test". Phoney energy crisis merely a ploy to access off-limits gas.

Turns out manufacturing is alive and well in Australia. 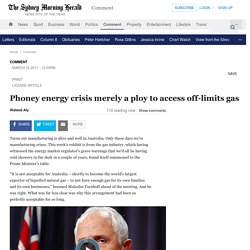 Only these days we're manufacturing crises. This week's exhibit is from the gas industry, which having witnessed the energy market regulator's grave warnings that we'd all be having cold showers in the dark in a couple of years, found itself summoned to the Prime Minister's table. "It is not acceptable for Australia – shortly to become the world's largest exporter of liquefied natural gas – to not have enough gas for its own families and its own businesses," boomed Malcolm Turnbull ahead of the meeting. And he was right. Thousands of workers find out they're being ripped off. One in four Australian workers who checked their pay through a union-run online wage calculator found out they were being ripped off, with staff in the restaurant business the worst affected. 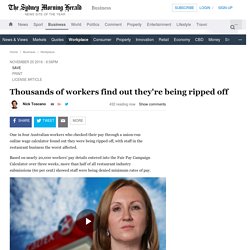 Based on nearly 20,000 workers' pay details entered into the Fair Pay Campaign Calculator over three weeks, more than half of all restaurant industry submissions (60 per cent) showed staff were being denied minimum rates of pay. This is a modal window. This modal can be closed by pressing the Escape key or activating the close button. Captions Settings Dialog Beginning of dialog window. The big banks have paid out $200 million in compensation. We now have a pricetag for the recent spate of "bank bastardry" – as government MP Warren Entsch has colourfully characterised a mounting litany of poor behaviour. 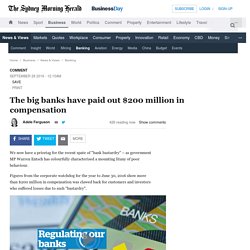 Figures from the corporate watchdog for the year to June 30, 2016 show more than $200 million in compensation was clawed back for customers and investors who suffered losses due to such "bastardry". Investigative Journalism. Manildra gave inflated jobs figures to minister before ethanol bill. Innovation and Better Regulation Minister Victor Dominello said he had sought to correct the parliamentary record. 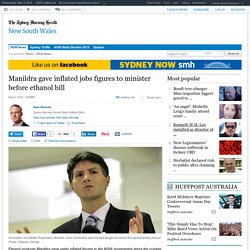 Photo: Orlando Chiodo Ethanol producer Manildra gave vastly inflated figures to the NSW government about the number of people employed in the industry before legislation forcing small petrol retailers to sell the biofuel. According to better regulation minister Victor Dominello​, Manildra told a staff member the industry supported 3000 direct jobs and 20,000 indirect jobs – figures quoted by Mr Dominello in his speech introducing the bill to the NSW Parliament.

But Mr Dominello has been forced to correct the record after discovering the true numbers were 218 direct jobs and 2668 indirect jobs. How 76 profitable companies left Australian taxpayers $5.6 billion out of pocket. Loaded: 0% Progress: 0% Australia's tax mix 'all wrong', says economist Standard Life Investments chief economist Jeremy Lawson says the federal government will need to make unpopular decisions when it comes to tax policy. 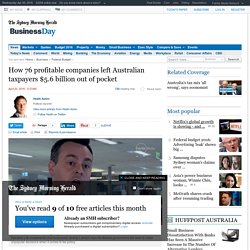 The biggest multinational companies operating in Australia are paying half the 30 per cent corporate tax rate on average, according to a new report delivered just weeks out from a budget expected to target multinational tax dodging. Twitter another closed book on earnings. The latest advertising figures from SMI Standard Media Index show social networking sites attracted $US46.5 million ($50 million) in ads from media buyers this year. 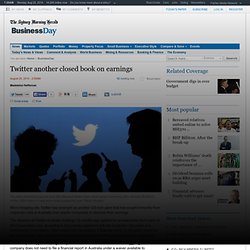 Photo: Reuters Micro-blogging site Twitter has emerged as another US tech giant that has sought immunity from corporate rules in Australia that require companies to disclose their earnings. The directors of Twitter Australia Holdings 12 months ago applied for an exemption from parts of the Corporations Act, according to documents registered with the Australian Securities and Investments Commission. This meant it did not prepare a financial report or directors' report for the last calendar year, amid continued concern over profit-shifting by international companies. Twitter has refused to disclose its Australian revenue, staff numbers or user numbers since starting to hire staff early last year. ACCC hatches fresh case tackling industry collusion. The country's top competition regulator is increasing its focus on cartel activity as part of a sweeping crackdown on companies that engage in anti-competitive behaviour. 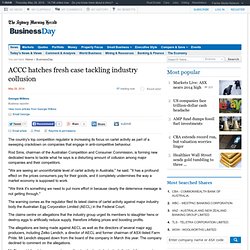 Rod Sims, chairman of the Australian Competition and Consumer Commission, is forming new dedicated teams to tackle what he says is a disturbing amount of collusion among major companies and their competitors. ''We are seeing an uncomfortable level of cartel activity in Australia,'' he said. ''It has a profound effect on the prices consumers pay for their goods, and it completely undermines the way a market economy is supposed to work. ''We think it's something we need to put more effort in because clearly the deterrence message is not getting through.'' Advertisement The warning comes as the regulator filed its latest claims of cartel activity against major industry body the Australian Egg Corporation Limited (AECL) in the Federal Court. Big business 'shirks' fair share of tax load. Almost a third of Australia's largest companies are paying less than 10¢ in the dollar in corporate tax, a report that exposes a gaping hole in government revenues over the past decade shows. 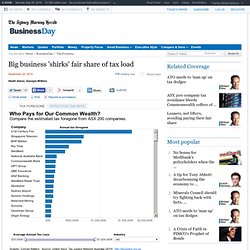 As Australia prepares to host world leaders at the G20 summit in Brisbane in November, where a global assault on tax avoidance will be discussed, the report found 84 per cent of Australia's top 200 stockmarket-listed companies pay less than the 30 per cent company tax rate. Some, among them household names such as James Hardie, do not contribute a dollar to Australian coffers, it found. Tax minimisation by large companies far outweighs that of small- and medium-sized businesses and has a disproportionately large effect on eroding the tax base. Corporate Tax Avoidance. Shell pumped $20 billion a year from motorists but paid no company tax. In the two years before it was sold to Viva, Shell reported revenues of $21.7 million and almost $22 billion, yet paid no income tax. 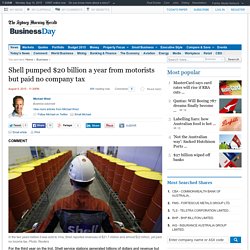 Photo: Reuters. Revealed: How 7 Eleven is ripping off its workers. The lot of the average 7-Eleven worker in Australia is as simple as it is bleak: you get paid half the $24.50 an hour award rate - or less - and if you complain your boss threatens you with deportation. It’s highly illegal and goes against the Australian tenet of giving people living in this country a “fair go”. A joint investigation into 7-Eleven stores by Four Corners and Fairfax Media has found systemic underpayment of wages and the doctoring of payroll records within the country’s biggest convenience store chain.

Politicians, lawyers and regulators all say something should be done to help these exploited and intimidated workers who are often are international students. Doctored time sheets and rosters, store financials with possibly understated wage bills, store reviews and explosive documents relating to payroll compliance from head office are further evidence that something is deeply rotten within the 7-Eleven Australia empire. Disability insurance claims often more stressful than original injury.

Could not load plugins: File not found Four things health insurers would like to track How much would you reveal about your personal health for a cheaper insurance premium? In September 2009, Jennie Wilcox noticed a strange car parked by the gate of her property in Springdale, in country NSW. The car, a black SUV, stayed for several hours before driving off. The next day, the car returned. Rupert Murdoch's US empire siphons $4.5b from Australian business virtually tax-free. According to an UNSW academic, Rupert Murdoch's Australian companies have paid income tax equivalent to only 10 per cent of their operating profits.

Photo: Reuters Rupert Murdoch's media empire in the US has siphoned off $4.5 billion of cash and shares from his Australian media businesses in the past two years, virtually tax free. According to calculations by University of NSW accounting academic, Jeffrey Knapp, over the past 10 years, Mr Murdoch's companies here have paid income tax equivalent to a rate of 4.8 per cent on $6.8 billion in operating cash flows, or just 10 per cent of operating profits. News Corp Australia chief executive Julian Clarke is scheduled to appear before the Senate Inquiry into Corporate Tax Avoidance this week along with executives from Google, Apple, Glencore, Rio Tinto, BHP and Fortescue. Apple's $85 million tax bill is a fraction of its almost $8 billion revenue. Apple paid $85 million in Australian income tax last year, despite making almost $8 billion in local revenue, accounts filed with the corporate regulator show.

Mr Medcraft said the only realistic response was harsher jail terms and bigger penalties for white-collar crime. He also repeated calls for a national competency exam for financial advisers in the lead up to a crackdown on the industry and more funding for ASIC to investigate the finance sector, including a user-pays funding model. Finance industry players were not "Christian soldiers", Mr Medcraft said on Tuesday, but were motivated by fear and greed. Ethics forgotten amid culture of greed and code of silence. Loaded: 0% American Express pays no tax on multibillion-dollar Australian operation for seven years.