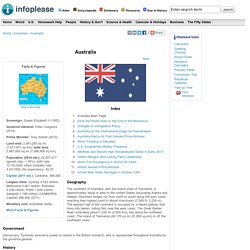 Mountain ranges run from north to south along the east coast, reaching their highest point in Mount Kosciusko (7,308 ft; 2,228 m). The western half of the continent is occupied by a desert plateau that rises into barren, rolling hills near the west coast. Australia.gov.au. Provides information about the life and times of Australia's prime ministers from 1901 to the present. 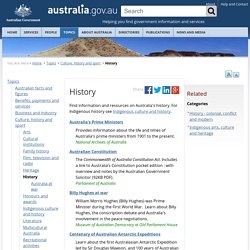 Australia at war. Provides resources on Australia's involvement in the Vietnam War. 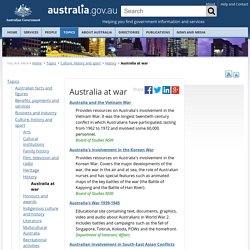 It was the longest twentieth century conflict in which Australians have participated, lasting from 1962 to 1972 and involved some 60,000 personnel. Board of Studies NSW. Indigenous culture and history. Connects Aboriginal and Torres Strait Islander people with Australian Government policies and programmes and raises awareness about the initiatives that affect them most. 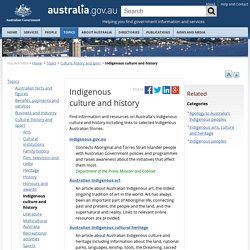 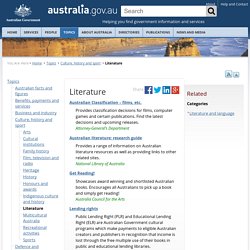 Find the latest decisions and upcoming releases. Attorney-General's Department Provides a range of information on Australian literature resources as well as providing links to other related sites. Multicultural Australia. Recreational activities. Heritage is all the things that make up Australia's identity – our spirit and ingenuity, our historic buildings, and our unique, living landscapes.Tabs: | | Department of the Environment There are three national parks in the Australian Alps that cross State and Territory borders. 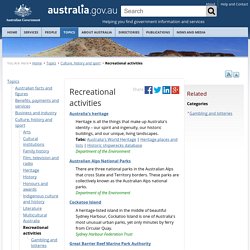 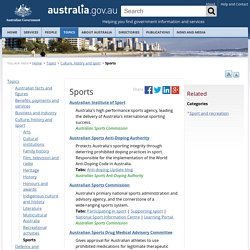 Australian Sports Commission Protects Australia's sporting integrity through deterring prohibited doping practices in sport. Responsible for the implementation of the World Anti-Doping Code in Australia.Tabs: Australian Sports Anti-Doping Authority Australia's primary national sports administration and advisory agency, and the cornerstone of a wide-ranging sports system.Tabs: | | | . Gives approval for Australian athletes to use prohibited medications for legitimate therapeutic purposes, in addition to other functions. 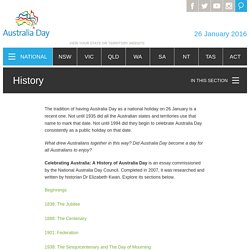 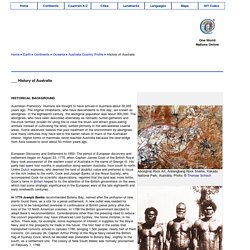 The original inhabitants, who have descendants to this day, are known as aborigines. In the eighteenth century, the aboriginal population was about 300,000. The aborigines, who have been described alternately as nomadic hunter-gatherers and fire-stick farmers (known for using fire to clear the brush and attract grass-eating animals instead of cultivating the land), settled primarily in the well-watered coastal areas. Some observers believe that poor treatment of the environment by aborigines over many centuries may have led to the barren nature of much of the Australian interior. Higher forms of mammals never reached Australia because the land bridge from Asia ceased to exist about 50 million years ago. In 1779 Joseph Banks recommended Botany Bay, named after the profusion of new plants found there, as a site for a penal settlement. First Australian penal colony established — History.com This Day in History — 1/26/1788.

The first 736 convicts banished from England to Australia land in Botany Bay. 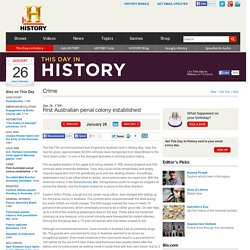 Over the next 60 years, approximately 50,000 criminals were transported from Great Britain to the "land down under," in one of the strangest episodes in criminal-justice history. The accepted wisdom of the upper and ruling classes in 18th century England was that criminals were inherently defective. Thus, they could not be rehabilitated and simply required separation from the genetically pure and law-abiding citizens. Accordingly, lawbreakers had to be either killed or exiled, since prisons were too expensive. With the American victory in the Revolutionary War, transgressors could no longer be shipped off across the Atlantic, and the English looked for a colony in the other direction. Captain Arthur Phillip, a tough but fair career naval officer, was charged with setting up the first penal colony in Australia. Although not confined behind bars, most convicts in Australia had an extremely tough life.