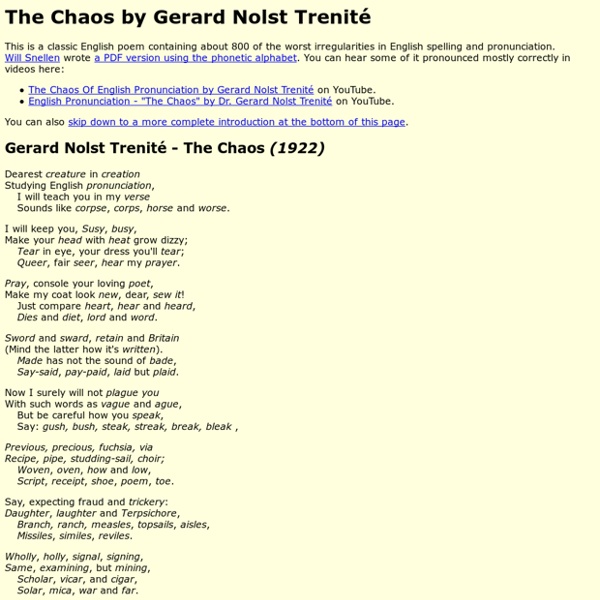 Expressions & Sayings Index If you prefer to go directly to the meaning and origin of a specific expression, click on its relevant entry in the alphabetical list below. Use this alphabet to speed up your search: A B C D E F G H I J K L M N O P Q R S T U V W X Y Z The Elian Script Introduction The configuration of the Elian script consists of a formal structure (Part I,) and three basic structural principles Part II). Part I Formal Structure How to pronounce English place names – Jason Anderson – Teacher, teacher educator and author Download a free resource for teachers! A couple of weeks ago, my students requested a lesson on pronouncing place names in London and England because they were always having difficulty making themselves understood at train and coach stations. I didn’t find many resources on the Internet designed for language students, only more technical guides that often went into too much detail and didn’t provide any useful rules. So I did some research, and found the following, which includes some really useful rules that can make the pronunciation of English place names guessable upon first encounter. I created a worksheet that you can copy and use in class or provide the URL to students for self-study. It may also be useful for teachers outside the UK who need to use materials that refer to English place names.

Need for New Hobby Leads to Stone Marbles [Tom Lange] said he was looking for a new hobby when he saw a marble made out of stone and wondered what goes into making one for himself. Fast forward three years and he set up shop at the Madison Mini Maker Faire to show off the tools he built and the fascinating glossy orbs he’s produced. Read on to see the awesome process he uses to turn a hunk of stone into a perfect marble. 10 tricky pronunciations Dictionaries are descriptive, not prescriptive, and if everybody started pronouncing space with a silent ‘p’ or genius with a hard ‘g’, then Oxford Dictionaries would reflect that fact. But there are some pronunciations, of course, which are more widely accepted than others. Some words – like scone and schedule – have two widely accepted pronunciations. But there are still quite a few words which many people feel unsure about… (FYI, clicking on any of these words will take you to the dictionary entry, which also includes an audio pronunciation. The pronunciations given below in the phonetic alphabet are British pronunciations.)

To My Old Master In 1864, after 32 long years in the service of his master, Jourdon Anderson and his wife, Amanda, escaped a life of slavery when Union Army soldiers freed them from the plantation on which they had been working so tirelessly. They grasped the opportunity with vigour, quickly moved to Ohio where Jourdon could find paid work with which to support his growing family, and didn’t look back. Then, a year later, shortly after the end of the Civil War, Jourdon received a desperate letter from Patrick Henry Anderson, the man who used to own him, in which he was asked to return to work on the plantation and rescue his ailing business. Jourdon’s reply to the person who enslaved his family, dictated from his home on August 7th, is everything you could wish for, and quite rightly was subsequently reprinted in numerous newspapers. Jourdon Anderson never returned to Big Spring, Tennessee.

Synthetic Sensors Abstract We explore the notion of general-purpose sensing, wherein a single, highly capable sensor can indirectly monitor a large context, without direct instrumentation of objects. Further, through what we call Synthetic Sensors, we can virtualize raw sensor data into actionable feeds, whilst simultaneously mitigating immediate privacy issues.