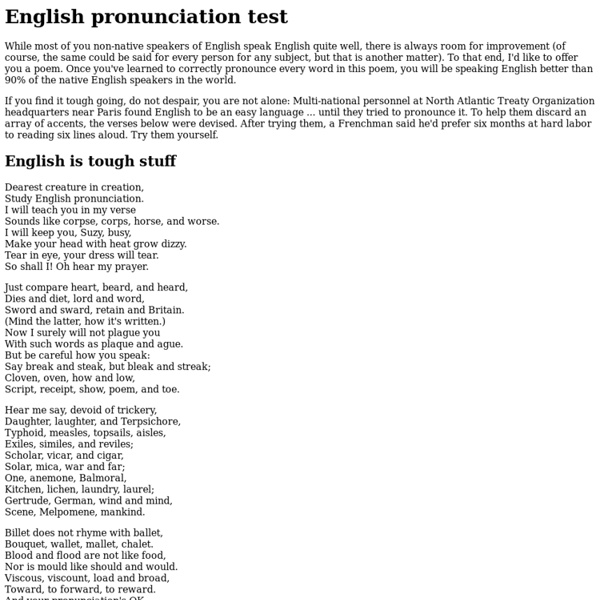 While most of you non-native speakers of English speak English quite well, there is always room for improvement (of course, the same could be said for every person for any subject, but that is another matter). To that end, I'd like to offer you a poem. Once you've learned to correctly pronounce every word in this poem, you will be speaking English better than 90% of the native English speakers in the world. If you find it tough going, do not despair, you are not alone: Multi-national personnel at North Atlantic Treaty Organization headquarters near Paris found English to be an easy language ... until they tried to pronounce it. To help them discard an array of accents, the verses below were devised. After trying them, a Frenchman said he'd prefer six months at hard labor to reading six lines aloud. Dearest creature in creation, Study English pronunciation. Just compare heart, beard, and heard, Dies and diet, lord and word, Sword and sward, retain and Britain. Related:  words

How to Be Happier at Work: 10 Tips Happiness--in your business life and your personal life--is often a matter of subtraction, not addition. Consider, for example, what happens when you stop doing the following 10 things: 1. Blaming. People make mistakes. Employees don't meet your expectations. So you blame them for your problems. But you're also to blame. Taking responsibility when things go wrong instead of blaming others isn't masochistic, it's empowering--because then you focus on doing things better or smarter next time. And when you get better or smarter, you also get happier. 2. No one likes you for your clothes, your car, your possessions, your title, or your accomplishments. Sure, superficially they might seem to, but superficial is also insubstantial, and a relationship that is not based on substance is not a real relationship. Genuine relationships make you happier, and you'll only form genuine relationships when you stop trying to impress and start trying to just be yourself. 3. 4. Interrupting isn't just rude. 5.

Important Infrequently Used Words To Know | Just English Paul V. Hartman (The Capitalized syllable gets the emphasis) alacrity a-LACK-ra-tee cheerful willingness and promptnessanathema a-NATH-a-ma a thing or person cursed, banned, or reviledanodyne AN-a-dine not likely to cause offence or disagreement and somewhat dull//anything that sooths or comfortsaphorism AFF-oar-ism a short, witty saying or concise principleapostate ah-POSS-tate (also: apostasy) person who has left the fold or deserted the faith.arrogate ARROW-gate to make an unreasonable claimatavistic at-a-VIS-tic reverting to a primitive typeavuncular a-VUNC-you-lar “like an uncle”; benevolent bathos BATH-ose an anticlimaxbereft ba-REFT to be deprived of something valuable “He was bereft of reason.” cynosure SIGH-na-shore (from the Greek: “dog’s tail”) center of attention; point to which all eyes are drawn. dilettante DILL-ah-tent 1. having superficial/amateurish interest in a branch of knowledge; 2. a connoisseur or lover of the fine arts Click to read: Like this: Related

Rouge Reveries: Fashion is Not for Everyone. Yesterday I would have considered myself an advocate for fashion for the masses - about fashion being available for everyone, affordable fashion, designer and high-street and vintage and the like. Four or five decades ago, high-fashion was strictly for the elite classes. Designer- high-street collabs are definitely a step in the opposite direction. No, dear civilians at the bus stop, I do not have a leopard print purse for it to match with my similar leopard print carry-all. Sometimes I swear I find it difficult to get dressed for a day out, especially to uni because of two reasons: a. because I really can't be bothered to get dressed - oh the shame. b. as soon as I put an effort into getting dressed I realise that it might be too much for the general mass to comprehend and I'll end up getting stared at wherever I go. I get to the bus-stop, and I have a five - seven minute walk to my closest bus stop so I meet a few people along the way.

Get (Almost) Any Book For Free: 100+ (Kosher) Sites Offering Great Literature for Download By Tiffany Davis Reading a book is fun, but when you forget it at home, are bored at work, looking to get ahead on your reading for your online bachelor degree class, or are just curious to get a sneak peek at whatever you ordered from Amazon, online book sites can be handy too. Below is a list of over 100 free (and legal) sites to find great literature for download. The Classics Browse works by Mark Twain, Joseph Conrad and other famous authors here. Classic Bookshelf: This site has put classic novels online, from Charles Dickens to Charlotte Bronte.The Online Books Page: The University of Pennsylvania in Philadelphia hosts this book search and database.Project Gutenberg: This famous site has over 27,000 free books online.Page by Page Books: Find books by Sir Arthur Conan Doyle and H.G. Textbooks If you don’t absolutely need to pay for your textbooks, save yourself a few hundred dollars by reviewing these sites. Math and Science Children’s Books Philosophy and Religion Plays Foreign Language

Brain Pickings Animal Rights Quotes, Sayings about Animal Welfare, Cruelty, Compassion Related Quotes Animals Civil Disobedience Integrity Vegetarianism Ask the experimenters why they experiment on animals, and the answer is: "Because the animals are like us." Ask the experimenters why it is morally okay to experiment on animals, and the answer is: "Because the animals are not like us." Animal experimentation rests on a logical contradiction. ~Charles R. God loved the birds and invented trees. We have enslaved the rest of the animal creation, and have treated our distant cousins in fur and feathers so badly that beyond doubt, if they were able to formulate a religion, they would depict the Devil in human form. From beasts we scorn as soulless, In forest, field and den, The cry goes up to witness The soullessness of men. The question is not, "Can they reason?" I care not much for a man's religion whose dog and cat are not the better for it. Personally, I would not give a fig for any man's religion whose horse, cat and dog do not feel its benefits. Hunting is not a sport.

Five Manifestos for the Creative Life by Kirstin Butler How a numbered list can start a personal revolution. Some days everyone needs a little extra encouragement. The words or lines or colors don’t want to come, or worse, we don’t even want to sit down to create. That’s when we turn to these inspiring manifestos, any one of which is guaranteed to give our uncooperative creativity a sharp kick in the pants. Here are five of our favorite contemporary manifestos that nudge ideas out of your head and into the hands of the world. We’ve long been fans of the amazing work of Frederick Terral, the creative visionary behind design studio Right Brain Terrain. You may not be a Picasso or Mozart but you don’t have to be. We can’t imagine more sound advice. Guidelines to get you from Point A to finished product, The Cult of Done Manifesto was written by tech guru Bre Pettis (of MakerBot fame) in collaboration with writer Kio Stark in 20 minutes, “because we only had 20 minutes to get it done.” This is your life. There is an enemy.

How to Be In The Moment Consciously vs. Mentally We hear a lot about ‘being in the moment’ and enjoying the NOW, but what does this actually mean? It seems as though there is a difference between understanding any given concept at the mind level versus truly putting it into practice at the level of being. So I thought why not simplify it all and run through some tips on how to achieve this? When it comes to “being in the moment.” The moment is where we are most natural. Misconceptions Being in the moment does not mean you are only meditating.Being in the moment does not mean you cannot reflect on past dates and future plans. How to Find the Moment To provide an incredibly simple image of the moment, imagine a space with no noise, I don’t mean environmental noise, but noise that comes from the incessant voice we hear in our minds that has made you a slave to its thoughts. Here are some simple techniques to find the moment more easily in life and make it something you can keep doing easily. Breathe!

The Gayness of Batman: A Brief History [Opinion] “Gayness is built into Batman. … Batman is very, very gay. There’s just no denying it. Obviously as a fictional character he’s intended to be heterosexual, but the basis of the whole concept is utterly gay.” As we reported last week, this was the claim made by Batman, Incorporated writer Grant Morrison in an interview with Playboy where he offers his insights into the psychology of superheroes. That’s not true, of course. When we talk about Batman’s gayness, we talk about presentation and perception. Something about Batman begs the question, and there are multiple possible triggers. It started in 1940, a year after Batman’s debut, and it started with a sensible solution to a writer’s problem. It has become an exhausted joke, of course; the hero/sidekick relationship has inspired decades of snickering insinuation. Wertham perceived the gayness of Batman, and perhaps even went looking for it, but he did not invent it. To Wertham this was alarming. That is not a positive message, I know.

Western Esoteric Texts Sacred-texts home Neopaganism GrimoiresBuy CD-ROM Buy Esoteric and Occult Books This page indexes resources at this site in the Western Esoteric tradition. There is much more related to this topic at this site, listed below. The Divine Pymander of Hermes Mercurius Trismegistus, translated by John Everard [1650] The Virgin of the World of Hermes Mercurius Trismegistus, translated by Anna Kingsford and Edward Maitland [1885] The Isiac Tablet of Cardinal Bembo by W. The Life and Doctrines of Jacob Boehme by Jacob Boehme, edited by Franz Hartmann [1891]An anthology of the German Christian mystic's thought. The Art of Worldly Wisdom by Balthasar Gracian, translated by Joseph Jacobs [1892] The Chaldæan Oracles of Zoroaster by W. A Wanderer in the Spirit Lands by Franchezzo (A. Cosmic Consciousness by Richard Maurice Bucke [1901]Three dozen cases of illumination, with detailed commentary. The Science of Breath by Yogi Ramacharaka (pseud. Raja Yoga by Yogi Ramacharaka (pseud. Tertium Organum by P.D.

The Psychology Behind The Rise Of Microblogging Krista Peck On 12/14/2012 Anyone who has been online for the last few years has noticed a remarkable shift away from busy, poorly designed websites and communities; and towards streamlined, almost minimalist sites and applications. While we are undeniably more digital than ever, it seems that we are taking a step back — not to move backward, but to regroup, realign and refine our online experiences as we move forward. With the rise of microblogging platforms such as Twitter, Facebook, Tumblr, Pinterest and Instagram, one has to wonder why these virtual tools are currently in vogue. While the ability to meet basic human needs is often a factor in explaining human behavior as it relates to popular trends, even Maslow’s hierarchy of needs is not adequate enough to explain the rise of microblogging. Here are five psychologically based reasons why microblogging likely appeals to us: Photo Taken By xoKristaPeck With Instagram 1. 2. 3. 4. 5.