People think a soul mate is your perfect fit, and... 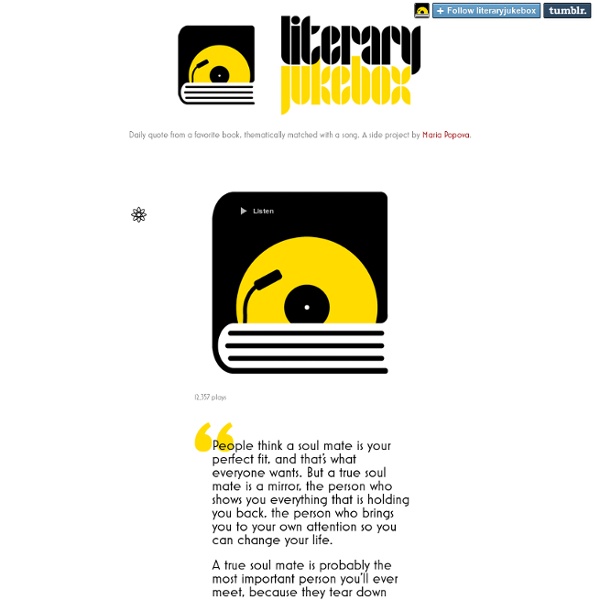 Provence Dining Table - Dining Tables - Kitchen And Dining Room - Furniture 0 items found Item(s) you were viewing are not available for international shipping. Search Tips - Check for typos or misspellings - Use fewer keywords, for example: "leather sofa" instead of "black leather sofa" - Try another term, for example: "sofa" instead of "couch" Can't find what you're looking for? 7 Social Hacks For Manipulating People 1. Whenever someone is angry and confrontational, stand next to them instead of in front of them. You won’t appear as so much of a threat, and they eventually calm down. Real Nurses Share True Ghost Stories Here are a few creepy tales from AllNurses.com, a website dedicated to nurses and the medical profession. Pleasant dreams! Don’t Let Them Take Me The best I have heard is from a nurse who said that one night she was floated to oncology at the hospital where she used to work.

Five Manifestos for Life by Kirstin Butler How a numbered list can start a personal revolution. Some days everyone needs a little extra encouragement. Inventor Spends Five Years Trying to Determine if Vermeer’s Paintings Are 350-year-old Color Photos Photograph of Tim Jenison via Boing Boing It has long been suspected that some of the old masters may have relied on optical devices such as the camera lucida to help with scale and proportion in their paintings, leading to more lifelike interpretations of landscapes and portraits. Tim Jenison, a Texas-based inventor and computer graphics specialist, became obsessed with one such painter: Dutch master Johannes Vermeer, who created such realistic paintings that they seemed to have more in common with photography than paint. Could Vermeer have created a system for replicating scenes in front of him using lenses and mirrors? Jenison embarked on an experiment to recreate one of Vermeer’s most famous paintings, The Music Lesson.

10 Psychology Tricks You Can Use To Influence People Before we get started, it’s important to note that none of these methods fall under what we would term the dark arts of influencing people. Anything that might be harmful to someone in any way, especially to their self esteem, is not included here. These are ways to win friends and influence people using psychology without being a jerk or making someone feel bad.