Why have young people in Japan stopped having sex? 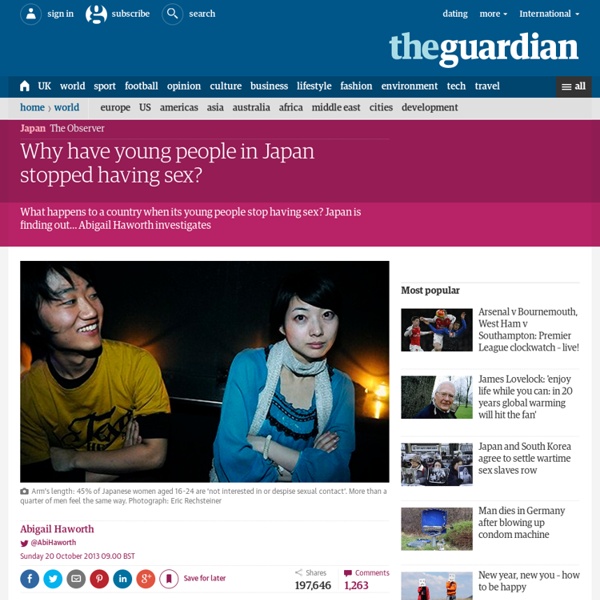 Ai Aoyama is a sex and relationship counsellor who works out of her narrow three-storey home on a Tokyo back street. Her first name means "love" in Japanese, and is a keepsake from her earlier days as a professional dominatrix. Back then, about 15 years ago, she was Queen Ai, or Queen Love, and she did "all the usual things" like tying people up and dripping hot wax on their nipples. Her work today, she says, is far more challenging. Aoyama, 52, is trying to cure what Japan's media calls sekkusu shinai shokogun, or "celibacy syndrome". Japan's under-40s appear to be losing interest in conventional relationships. The sign outside her building says "Clinic". Inside, she takes me upstairs to her "relaxation room" – a bedroom with no furniture except a double futon. The number of single people has reached a record high. Many people who seek her out, says Aoyama, are deeply confused. Official alarmism doesn't help. Marriage has become a minefield of unattractive choices.

If He Hollers Let Him Go - by Rachel Kaadzi Ghansah Discussed: Ohio’s Rolling Farmland, Hippies in Tie-Dye, Paul Laurence Dunbar, Kanye West, Oprah, A Simpler Way of Life, Seventy-Year-Old Comparative Literature Professors in Birkenstocks, Negritude,Thurgood Marshall, Black Activism, Patrice Lumumba, Stepin Fetchit, Richard Pryor, Dick Gregory, Mark Twain’s Pudd’nhead Wilson, Hemp Stores, Reuben Sandwiches, Dusk in Yellow Springs Although the city of Dayton is small and has been hit hard by the decline of industry, in Xenia and Yellow Springs the land is green, fecund, and alive, even in the relentless heat of summer. Xenia is three miles from where the first private black college, Wilberforce, opened, in 1856, to meet the educational needs of the growing population of freed blacks that crossed the Ohio River. Yellow Springs, a stop on the Underground Railroad, was initially established as a utopian community in 1825. In 1852, Horace Mann founded Antioch College and served as its president.

David Grossman: Stop the Grindstone of Israeli-Palestinian Violence JERUSALEM — Israelis and Palestinians are imprisoned in what seems increasingly like a hermetically sealed bubble. Over the years, inside this bubble, each side has evolved sophisticated justifications for every act it commits. can rightly claim that no country in the world would abstain from responding to incessant attacks like those of , or to the threat posed by the tunnels dug from the into Israel. Hamas, conversely, justifies its attacks on Israel by arguing that the are still under occupation and that residents of Gaza are withering away under the blockade enforced by Israel. Inside the bubble, who can fault Israelis for expecting their government to do everything it can to save children on the Nahal Oz kibbutz, or any of the other communities adjacent to the Gaza Strip, from a Hamas unit that might emerge from a hole in the ground?

Marx Is Back The inscription on Karl Marx's tombstone in London's Highgate Cemetery reads, "Workers of all lands, unite." Of course, it hasn't quite ended up that way. As much buzz as the global Occupy movement managed to produce in a few short months, the silence is deafening now.

Reusable Cloth FAQ - Pad Frequently Asked Questions - Homestead Emporium What are the measurements for H.E.R. pads? Winged Pad Measurements H.E.R.Pads wrap around wings offer extra protection against leaks. Hey Mama by Kiese Laymon A black mother and her son talk about language and love in the South. Image by Jennifer Packer, Mario II, 2012. Courtesy the artist When Middle East Conflicts Become One It’s amazing how much of the discussion of the Gaza war is based on the supposition that it is still 1979. It’s based on the supposition that the Israeli-Palestinian dispute is a self-contained struggle being run by the two parties most directly involved. It’s based on the supposition that the horror could be ended if only deft negotiators could achieve a “breakthrough” and a path toward a two-state agreement. But it is not 1979. People’s mental categories may be stuck in the past, but reality has moved on.

Sex Is Important to Many Midlife Women Brenda Goodman HealthDay Reporter Posted: Tuesday, February 11, 2014, 7:00 AM MONDAY, Feb. 10, 2014 (HealthDay News) -- The mechanics of sex may become a bit more difficult after menopause, a new study finds. But most women will continue to be sexually active as long as they feel sex is important. The study, published online Feb. 10 in JAMA Internal Medicine, included 354 women who ranged in age from their 40s to mid-60s. All of the women reported being sexually active at the start of the study.