Can you write a story in just 50 words? 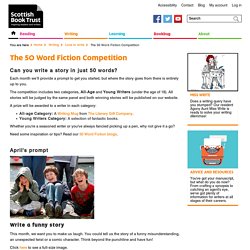 Each month we’ll provide a prompt to get you started, but where the story goes from there is entirely up to you. The competition includes two categories, All-Age and Young Writers (under the age of 18). All stories will be judged by the same panel and both winning stories will be published on our website. A prize will be awarded to a writer in each category: Whether you're a seasoned writer or you've always fancied picking up a pen, why not give it a go? Need some inspiration or tips? April's prompt Write a funny story This month, we want you to make us laugh. Click here to see a full-size image. How to enter You can submit one entry to either the all-age category or the young writers category. To submit your story, please complete the form below. We welcome entries in Scots or Gaelic for both categories. Entries are open until Monday 27 April (5pm).

Due to the high volume of entries received we are unable to give feedback. Fish and wind turbines don’t mix. · —Nina Pierpont, MD, PhD (10/25/09) “To stand at the edge of the sea, to sense the ebb and flow of the tides, to feel the breath of a mist moving over a great salt marsh, to watch the flight of shore birds that have swept up and down the surf lines of the continents for untold thousands of years, to see the running of the old eels and the young shad to the sea, is to have knowledge of things that are as nearly eternal as any earthly life can be”—Rachel Carson “Thousands of schooling fish form a rip curl-like structure at Samurai Pier in Milne Bay, Papua New Guinea during the filming of ‘Under the Sea 3D’” (© Jeff Wildermuth and used with appreciation) Wind turbines produce low-frequency noise (LFN) and seismic vibrations—on this there is no longer any question or worthwhile debate.1 We should all be alarmed by the implications for sea and aquatic life. 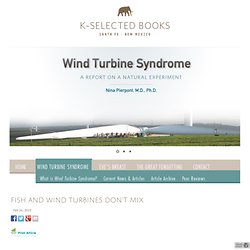 Fish use infrasound detection for a variety of critical social and survival functions. And so on. 1 van den Berg, GP. 2004. Infrasound monitoring: CTBTO Preparatory Commission. Infrasound - Research Articles - ECRIP. Responses of the Ear to Infrasound and Wind Turbines. Infrasound. Infrasound is sound that is lower in frequency than 20 Hz (Hertz) or cycles per second, the normal limit of human hearing. 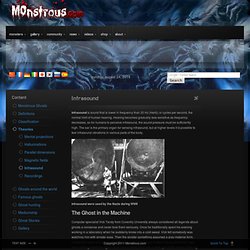 Wind Turbines and Ghost Stories: The Effects of Infrasound on the Human Auditory System. Introduction Climate change and fossil fuel depletion have pushed many countries to seek and invest in alternative clean energy sources, such as wind energy. 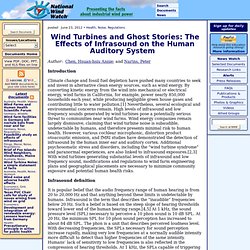 Wind energy companies remain largely dismissive, claiming that wind turbine noise is subaudible, undetectable by humans, and therefore presents minimal risk to human health. Perception of Infrasound. Infrasound. THE INFRASOUND (to the left) OF A FOREST ELEPHANT RUMBLE Overview One of the intriguing facts about elephants is that some of their vocalizations are infrasonic, and thus are inaudible to humans. 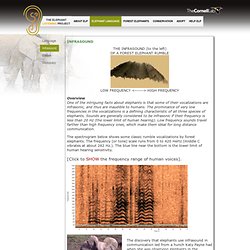 The prominance of very low frequencies in the vocalizations is a defining characteristic of all three species of elephants. Sounds are generally considered to be infrasonic if their frequency is less than 20 Hz (the lower limit of human hearing). Low frequency sounds travel farther than high frequency ones, which make them ideal for long distance communication. The spectrogram below shows some classic rumble vocalizations by forest elephants. . © Melissa Groo When elephants are listening, they tend to hold their ears out wide and keep them still, but when they are rumbling, they tend to flap their ears. The discovery that elephants use infrasound in communication led from a hunch Katy Payne had when she was observing elephants in the Washington Park Zoo, Portland, Oregon. Frequently Asked Questions. High-frequency direction finding. High-frequency direction finding, usually known by its abbreviation HF/DF or nickname huff-duff, is the common name for a type of radio direction finder (RDF) introduced in World War II. 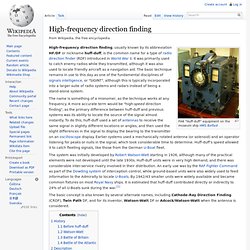 It was primarily used to catch enemy radios while they transmitted, although it was also used to locate friendly aircraft as a navigation aid. The basic technique remains in use to this day as one of the fundamental disciplines of signals intelligence, or "SIGINT", although this is typically incorporated into a larger suite of radio systems and radars instead of being a stand-alone system. The system was initially developed by Robert Watson-Watt starting in 1926, although many of the practical elements were not developed until the late 1930s. Huff-duff units were in very high demand, and there was considerable inter-service rivalry involved in their distribution. 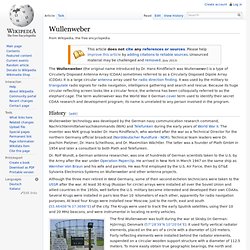